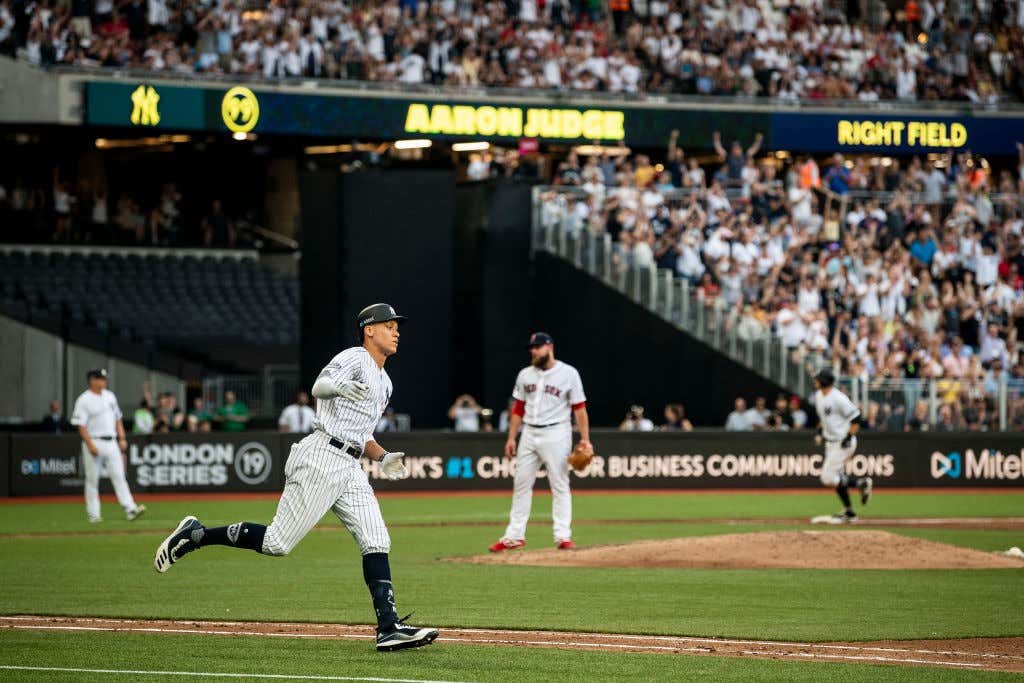 I don’t even know how to write this blog. The Yankees scored 17 runs and had to bring their closer into the game. The offense looked every part as good as it’s been over the last 3 weeks. Relentless. They put up a 6 spot in the blink of an eye in the first inning. Porcello last one out. It was a blood bath once Hicks’ ball landed in the right field stands for his two run shot. And then? Then Masahiro Tanaka decided to put on a show for the Britts. Just a showman in every sense of the word. A true entertainer. They came all this was to London to play in front of the world, might as well make it a game for a little longer, right? A little over an hour into the game we had a tied 6-6 ball game at the end of one. Just preposterous. The over under was 11.5 and that hit after one goddamn inning. I have never seen anything like it in my life.

How’d the Yankees respond? More offense. All of the offense. 11 unanswered.

Gardy with a blast.

The greatest hitter of all time, DJ LeMahieu picked up four more hits and five RBIs today, including this massive bases clearing double with two outs.

I’ve never seen anything like him in my life. I’m not sure I’ve ever seen a hitter as hot as he is, at least on the Yankees. His average is up to .342 and climbing by the second. Still feel like he should be hitting .500 with how automatic he’s become. I just don’t get it. Buy a shirt. LeMachine. Buy a shirt.

Judge had to get himself involved of course with this blast. No cheapie there. That’s gone in every stadium boys and girls.

Luke Voit pulled up lame after roping his 4th hit of the day in the 5th inning. It looked like a hammy at first, but it ended up being tightness in a core muscle below the belly button. Every test so far has come back okay and he was feeling much better after the game when he was interviewed by his locker. It looks like at the moment he avoided a disaster like a sports hernia injury (which many feared), but we’ll see in the morning. I could not live without Luke Voit in my life. I refuse.

Seeing Voit go down parlayed with it being ridiculously hot and humid, Boone decided to pull Judge and Gary from the game since it was 17-6. In hindsight obviously a bad move, but I guess at the time it wasn’t the worst idea given the situation.

Nestor Cortes and Tommy Kahnle did not do their job preserving the lead. They let in seven runs to bring Boston right back into this. Ridiculous. The fact that Ottavino, Britton, and Chapman had to come into a game where the Yanks scored 17 is lunacy. I began to wonder if 17 was going to be enough to win this. Luckily, it was and the Yanks held on to improve to a season high 25 games over .500. Jesus Fucking Christ what a game.

We do it all again tomorrow at 10am. Stephen Tarpley is pitching as the opener. Who knows what’ll happen. I’m exhausted. Both myself and Jared’s backs hurt. His way worse than mine. Of course we pick today of all days to whip each other as punishment to spice things up. Fucking idiots.