Down 5-0? Down 6-5? Blow the lead in the 9th? Who gives a shit? The Yankees don’t blink, they only respond. This offense doesn’t stop. 1-9 you’re doomed. There is no end. They are inevitable. Gleyber Torres. DJ LeMahieu. Aaron Judge. Luke Voit. Didi Gregorius. All of them came through today. The beat don’t stop. Next stop London.

What a crazy game today to wrap up the sweep against Toronto. Let’s break it down in some orderly fashion.

4.1 IP 8 hits 6 runs 4 walks. Awful. Three batters in three runs scored. What are we doing here? 2019 has been a wildly disappointing year for Big Maple in the Big Apple. Aside from his two starts against Boston and the Royals he’s been mediocre. He has big troubles in the first inning seemingly every time he’s out there. It’s insane. People are throwing the name Sonny Gray around and I mean I don’t necessarily disagree, but I have a little more hope than that. I’m not sure if his knee is 100% healthy or if he needs to go see his sports psychologist again, but figure it the fuck out dude.

No more words left to say. If you don’t vote DJ LeMahieu into the All Star Game you don’t deserve to have normal human rights: mlb.com/vote

Almost ready to call it a year for Stanton. Injury after injury. All bizarre. All reports initially coming back fine, and then disaster. This isn’t good. You would imagine this spells good news for Clint Frazier, although it doesn’t appear he’ll be making the trip to London for some reason. Tauchman is going instead.

Props To The Bullpen (Minus Britton)

Working with a limited pen today, David Hale, Tarp Man, and Ottavino combined to be lights out, bridging the gap to the 9th inning after Paxton’s shortened outing. Obviously Britton sucked balls today and couldn’t find the zone. Just one of those days. At least when we blow 9th inning leads we find a way to win.

52-28. Commanding lead in the AL East as we approach the 4th of July. Bring on London baby (this is such a stupid trip).

Didn’t think when I woke up today that Abella Danger would be liking my Yankees tweets but here we are.. 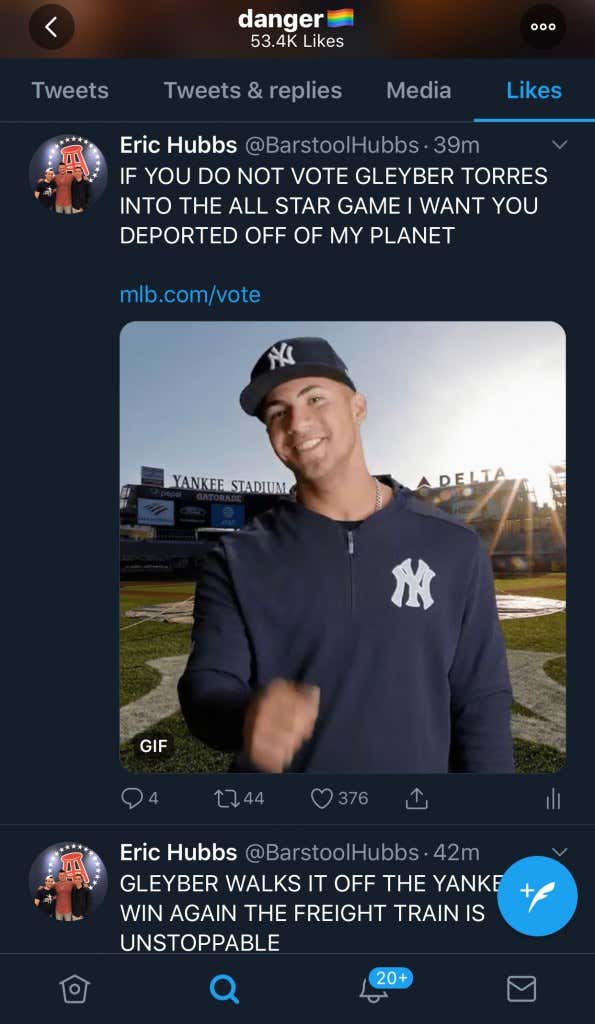