BOSTON – HBO refused an opportunity to come on The Kirk Minihane Show on Thursday and defend the journalism of HBO Sports following the release of a highly critical report on Barstool Sports.

After the Tuesday night report from “journalists” Bryant Gumbel and Soledad O’Brien, Minihane requested an interview with Gumbel, O’Brien, the head of PR, a producer on the show, an assistant producer on the show — or literally anyone from HBO willing to defend the phony investigation.

“We are unable to facilitate your request at this time, but kindly refer you to the segment that aired on Tuesday,” HBO Senior Publicist Chuck Kingsbury said in an email to The Kirk Minihane Show. 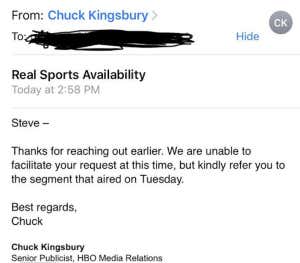 In the HBO report, O’Brien compared Barstool Sports founder Dave Portnoy to a third-world dictator and called the hugely successful entrepreneur a “vile” human being. The HBO team has also been accused of failing to gather the opinions of Barstool supporters and purposefully excluding footage that did not bolster the No Fun Police Narrative.

Kingsbury did not respond to inquiries about how HBO will remain in business now that Game of Thrones is over and everyone is cancelling their subscriptions.