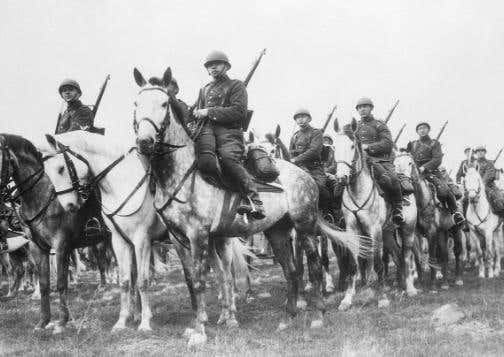 Sooo on this day in 1934, Germany and Poland signed a non-aggression treat. Then 5 years later after Germany had spent all that time building up their armaments of tanks and airplanes they said fuck yo treaty and Blitzkreiged the shit out of Poland. The Poles were WAY behind when it came to industry and building up a modern Army. They had like 15 tanks and 11 airplanes or something. What they did have a was strong Cavalry unit. Like legit cavalry. Horse. Poland, always preparing to fight the war of 100 years ago. Anyways, there’s many stories about this battle, known as the Charge at Krojanty. The Germans tell a story where that is basically “these dumb fucking Polish guys charged our tanks on horseback and we slaughtered them” and the Poles say “We attacked a unit of German Infantry and We WON! And then we got slaughtered”. As best I can tell is that the Poles saw this group of German soldiers resting and they tried to take them by surprise and they scattered the infantry and “won”, but they didn’t see the German forces behind the tree line and took on heavy losses as machine gun fire took out about a 1/3rd of their forces. The Charge caused a delay in the Blitzkrieg and the Germans didn’t fully slaughter the Polish Cavalry until the next day.