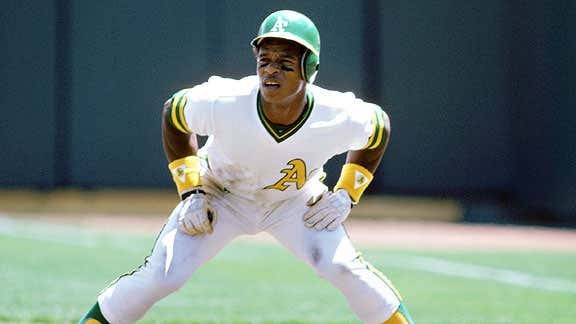 As Lou Brock is finishing up his career in his 19th season, the man who would one day smash his base stealing records is just beginning. Mired in last place the Oakland Athletics promote 20-year-old prospect Rickey Henderson from AAA Ogden. Henderson, playing both ends of a doubleheader against the Texas Rangers goes 2-for-4 in the opener and steals his first base. He would only steal 1,405 more.

In 1979, the all-time stolen base record was in question. Two years earlier, Lou Brock of the St. Louis Cardinals swiped his 893rd career base, giving him the record that was once held by Ty Cobb. However, some recognized Billy Hamilton as the holder of the record. Hamilton, who played nearly exclusively in the 19th century had over 900 stolen bases. Though the way stolen bases were counted was different in his day. Most experts put Hamilton’s total anywhere between 912 and 937 career steals, though Cobb had what was the modern-day record. Before finishing his career, Brock would end all doubts as he finished the 1979 and his career with 938 stolen bases.

The Oakland Athletics were a dynasty in ruin in 1979. Winners of three straight World Series 1972-1974. By the end of the decade, the A’s were a team in shambles, free agency had decimated the roster and Owner Charles O. Finley had checked out. Living in Chicago his only connection to news of the team was through a bat boy named Stanley Burrell who would relay play by play of games. Burrell who had a facial resemblance to Hank Aaron and worked with the team since he was 11 was nicknamed Hammer. He would carry that name to fame and fortune as the rapper MC Hammer a decade later. Finley would try to sell the team to New Orleans investors who attempted to relocate the team but could not get out of their lease at the Oakland Alameda County Coliseum, despite the A’s drawing just 306,763 fans in 1979.

Managed by Jim Marshall, the Athletics held a record of 22-49 as they hosted the second place Texas Rangers in a Sunday doubleheader. The Rangers led by Pat Corrales were 36-33 as the day began. With a dearth of talent in the Athletics decision to call up Rickey Henderson was an easy one, as they felt he could give fans something to cheer as Henderson had grown up in Oakland. Born in the back of an Oldsmobile on the way to a local hospital in Chicago on Christmas Day in 1958, Henderson was named after singer Ricky Nelson. After his father left when he was an infant his mother and he moved to Oakland when he was two years old.

The Athletics drafted Rickey Henderson in the fourth round of the 1976 draft out of Oakland Technical School. He quickly rose through the A’s system setting several bases stealing records along the way. In the first part of the 1979 season, with the Ogden A’s of the Pacific League, Rickey Henderson had 44 steals before being called up to the big leagues for the first time.

Batting leadoff and playing left field with #39, Rickey Henderson led off the game with a double against John Henry Johnson. Henderson though would later be thrown out at home attempting to score on a fly ball by Jeff Newman. In the third inning, Henderson singled and stole his first base, but would fail to score as Wayne Gross flew out to end the inning. Rickey Henderson would get two more at-bats that first game flying out to right in the fifth and seventh innings as Oakland suffered a 5-1 loss. In the second game of the doubleheader, Henderson went hitless in four at-bats as the Rangers won 7-2 to complete the sweep.

Rickey Henderson had his ups and downs in his first season, playing 89 games while batting .279. He would record 33 stolen bases, one home run and 49 runs scored. It would take Lou Brock 19 seasons to steal 938 bases. Henderson would break the record in 1991, finishing his career with 1,406 stolen bases as he led the league in steals 11 of 12 seasons between 1980 and 1991, the lone exception coming in 1987 when he dealt with a hamstring injury. In 1982, Rickey Henderson set the single-season record with a mind-bending 130 steals.

Besides being the all-time stolen base leader at 1,406 a record unlikely to ever be touched, Rickey Henderson is the all-time leader in runs scored with 2,295. He also held the all-time lead for career walks with 2,190 but the record was surpassed by Barry Bonds. The Man of Steal would also collect over 3,000 hits like Lou Brock, as he had 3,055 hits upon playing his last major league game in 2003. Rickey Henderson also led off a game with a home run 81 times, setting a major league record.However, the defiant Henderson refused to acknowledge his career was over until 2007 when he became a coach with the New York Mets. In those last year, Rickey Henderson in an attempt to extend his career played independent baseball with the Newark Bears as he tried to prove he could still play well after the age of 40.