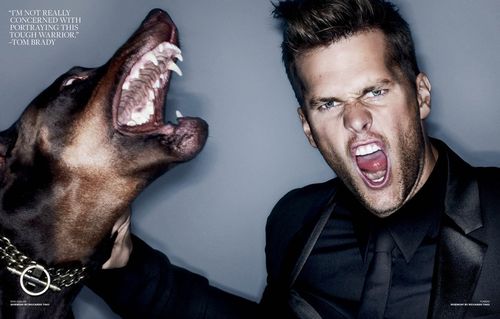 PFT – At least one person in the Tom Brady camp is not a happy camper about Brady losing his favorite wide receiver. Just minutes after the Broncos confirmed that they reached a two-year deal with former Patriots wide receiver Wes Welker, Tom E. Curran of CSNNE.com spoke to a source close to Brady who was “beyond enraged.”…

Spoke to someone close to Tom Brady. Beyond enraged at contract details that netted Broncos Wes Welker. “Disgrace” “disservice” were used.

I don’t blame Brady one bit for being pissed.  It can’t be easy to be the quarterback of an offense that just lost a guy who is a guaranteed 16 games, 115 catches and 1,200 yards.  There aren’t many sure things in this life or in football, but Wes Welker is one of them.  Plus you can’t blame Brady for being emotional about this.  He was a great teammate and an impossible guy not to root for.  But then again Brady reacted the same way about Lawyer Milloy, Willie McGinest, Richard Seymour, Mike Vrabel and a half a dozen others.  We all did.  It’s the normal, sentimental reaction.  But running the most successful organization in all of sports isn’t about sentiment.  We weep for Welker and curse the Patriots front office.  We have that luxury.  We have the luxury of not knowing what Belichick knows: that Welker’s departure, while tragic, probably wins games.  At least by their calculations it does.  This wasn’t some screw up on the Patriots part.  They weren’t caught with their pants down or blindsided by some surprise offer by another team that came out of nowhere.  This was calculus.  They read the market, decided what they felt he was worth, and stuck to their number.  For sure Belichick, Ernie Adams and Nick Cesario weren’t running around the office waving jazz hands around going “Ohmygod ohmygod whatarewegonnado whatarewegonnado????”  As a matter of fact, Belichick was so panicked he spent Tuesday night on Twitter answering questions about the last book he read.  You can question their judgment, but you can’t argue they didn’t know exactly what they were doing.

In any belief system, your faith gets tested and Belichickism is no exception.  Take the Bible. I’ve always felt like there are two Gods in there, your Old Testament God and your New Testament God.  The New one is all about love and understanding and forgiveness.  The Old one is about suffering and sacrifice and punishment.  The New Testament God is John Henry, giving 37 year old DHs coming off ankle surgery $28 million, a truck and a plague for home runs he hit in 2004.  Belichick is Old Testament God, letting you sacrifice yourself, give him everything you’ve got, then striking your ass down whenever it suits him.  Sure it’s cold, but you can’t deny it’s been effective.  In Welker’s case, they let him lay it all on the line got the best years of his career out of him, then replaced him with a younger version of himself.  Is Danny Amendola Wes Welker?  No.  But then again, Wes Welker wasn’t Wes Welker until he came here either.  He went from 100 catches in 3 years in Miami to having 100 catches here every year before I started my Christmas shopping.  And at the end of Amendola’s deal he’ll be the same age Welker is now. Brady and my and most people’s faith is getting tested again on this one, but right or wrong, it wasn’t personal, it was a football decision. I’ve said it before and I’ll say it now: In Bill We Trust.  @JerryThornton1