After not being able to listen to this live last night with the live show, I finally was able to sit down and listen to all 4 songs this morning. I went into this thinking it’d be fairly weak, most athletes that rap are never that great. But, there were some decent bars in all 4 songs with shots at each other.

This obviously isn’t Pusha T/Drake or MGK/Eminem like we’ve seen over the last year. That said, these are guys that get into it. Is any of this planned? I don’t think so. Dame is absolutely dropping an album so it isn’t shocking from him.

Now, what I am curious about is if this started before hand. That’s the one thing I don’t have full clarity on. But, we know it at least started with Bagley calling Dame out on TV. Dame responded saying he won’t go on the show but he’d hash it out.

Bagley made sure there would be a response by dropping the first song ‘No Debate.’ But, more than that he used Dame’s ‘logo’ if you want to call it that with the watch – typically reserved for ‘Dame Time.’

A fairly innocent song. There’s actually not really much to it in terms of a diss track. He uses this picture 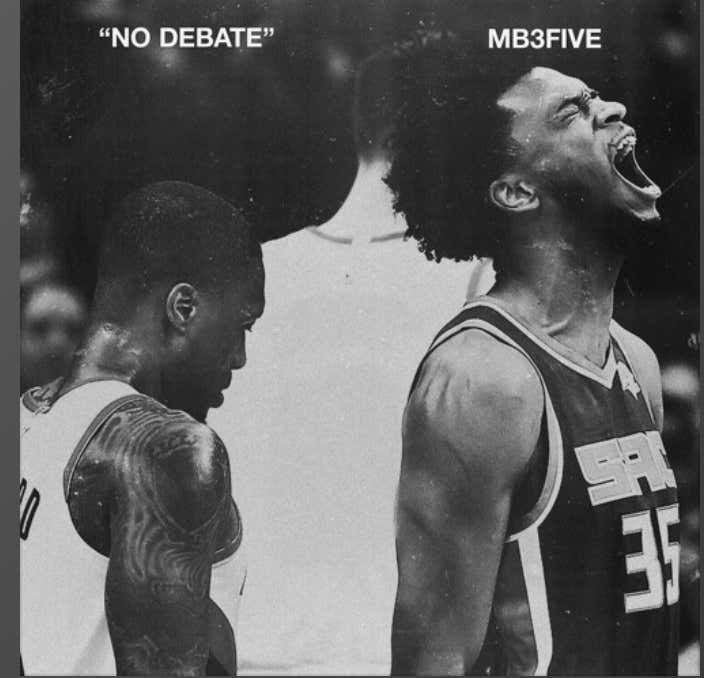 It’s kind of a fire beat though. But, in terms of a diss? Yeah, there’s really nothing there. The only thing he mentions in terms of Dame is going at him a bit. He brings up being on the show and then writing on the plane. But, for using that picture and the watch in the tweet, I expected more.

Naturally Dame responds. Not only that, but he responds in the most Dame way possible. Dropping this in the middle of the first round of the Draft. He doesn’t really hold back right away either. He uses the MARVINNNNN title with Bagley’s face so it’s pretty clear he’s going at him. On top of that he uses the same beat Drake used in ‘Duppy Freestyle’ when he was going at Pusha T. Low key love that move.

Right off the bat you can tell he’s ready to go. He starts with ‘this boy called my name. Amateur bars.’ This is all in the first 10 seconds or so really letting you know that we finally have a diss track. Assuming this is what Dame meant when he said he’d hash it out.

You then get into the lyrics and again, there’s a common theme here. ‘

1. ‘You still in Pampers. You never see Floyd spar with amateurs.’ This is the common theme in ‘MARVINNNN.’ Essentially Dame saying he’s the vet, Bagley is some unproven dude and he’s going to roast him for that.

2. He shouts out YG with ‘where I’m from big bank take lil bank.’ Dame’s never hid his love for Oakland and vice versa. Besides the shout out to YG this is a subtle shot at Bagley with the big bank, lil bank.

3. ‘Should have DM’d me again. Asking about my 3rd album, you a fan’ – This is something that we’re starting to see come to life, not only in rap battles just any argument now. Calling out the fact there was previous communication. I don’t think it’s necessarily a huge diss or anything but Dame twists it with the ‘you a fan’ line.

4. ‘You ain’t established in the league for one’ – Straight, direct shot at Bagley. Yeah, he has potential. Dame acknowledges that. But, he also throws out that that’s all Bagley is right now to him. Dame is an All-NBA dude. Bagley has potential. Clean shot.

Now, what I do kinda get lost with is the fact, Dame goes back for more. He clearly won the first round. Like I said, Bagley’s song is pretty dope, but that ain’t a diss track. Nice touch by Bagley using a picture with Lillard dejected and the Dame Time watch.

But then Dame comes back and drops a second song – ‘Bye Bye.’

First off. WHAT. A. PICTURE. This of course is from his buzzer beater in the first round that eliminated the Thunder. Just an unbelievable picture. I can’t get enough of it. That alone gives him the win for me. If he didn’t put out a song it would have been perfect. But, this is Dame D.O.L.L.A. now not Damian Lillard so he drops a song.

He starts off with the similar lines from MARVINNNN, calling Bagley an amateur and not ready to play with him. However, where he starts to pick it up more is the ‘had my school in high school, probably copped.’ Again, playing on the fact that Bagley has been a fan of Dame for years.

Dame really finishes him more with talking about dudes that gassed up Bagley. It’s fairly subtle and can be interpreted a few different ways. To me it’s really about how Bagley was gassed up in high school and Duke and has these guys telling him how great he is. Dame knocks him down a notch.

Bagley finally gets into the diss game. He drops the picture of him holding a baby Dame. He brings up getting gassed up and needing to burp him. Pretty solid intro for him. Then he gets into it. ‘I said your name a few weeks ago, you been in a casket.’ This tells me this beef has been brewing for at least a few weeks. Pretty straightforward by Bagley here.

Then it’s another direct shot. ‘Changing Dame Dolla to chump change.’ Again, this is where Bagley is pissed off and just continuing to go direct at Dame. Perhaps it’s the 6am release, perhaps it’s weeks of anger.

He’s pretty direct in ‘Checkmate.’ He’s responding to all of Dame’s lines in his two songs. Bringing up the fact that he’s called a clown, gassing up.

Bagley though drops perhaps the best line from the 4 songs with ‘big bank, lil bank stuff don’t work. I understand what you was doing, you been on my nuts since Duke and I’m a fan?’ Absolute FIRE. Calling out the same thing he got called out for but in a much better way. Doesn’t bring up DM’s or anything casual. Just that Dame has been on his nuts forever.

He finishes strong with Checkmate too. He acknowledges that Adidas sent him Dame’s (get that bag) but he returned it right away. He also brings up that Dame went at his dad – which goes back to the gassing up part. This is what Bagley should have done in No Debate.

I give Dame the win but it’s closer than how most NBA guys are responding:

If Bagley went in more during No Debate he may have won this thing. But, Dame attacks first and gives him the win. Either way, decent bars from both of them and now allow me to save you the time – THIS LEAGUE.