What a perfect short film from beginning to end. Yes the lunatic with what appears to be the possession of a gym teacher screaming at someone holding a revolver and having a pissing contest with him because his bag was disrespected is entertaining and all. But it’s the supporting cast that carries this film. Gun Guy does his part carrying the flick by not only literally carrying but also waving a new batch of commuters onto a train with a potential explosive situation involving two weapons and at least one loony toon while claiming to be a cop.

However the true star of the show is Suit Guy AKA The Stereotypical New Yorker. I like to imagine that Suit Guy was on his way to an interview as this tirade began. Suit Guy was second-guessing himself for not printing out his resume on fancy resume paper because who looks at paper resumes in 2019 and if he had enough money to buy nice resume paper, he probably wouldn’t need this job? While that was all going through his head, he realized there was a screaming match with a gun and a bat unfolding right in front of him: 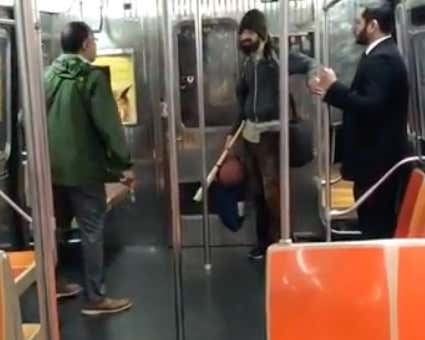 So he did what any New Yorker would do when the inconvenience of a potential deadly situation unfolds in front of them, which is walk about 10 steps down to the next door (which as we all know is always a safe distance from any sort of confrontation on the subway) then politely move out of frame: 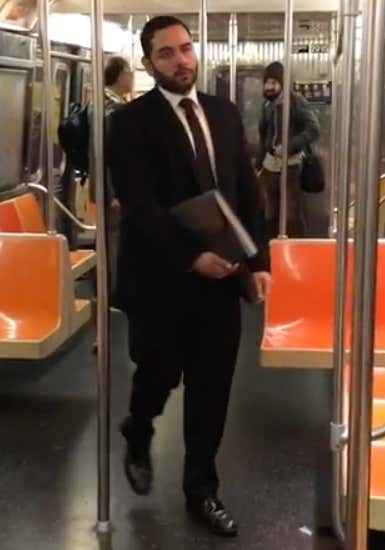 Before whipping out his phone out and recording someone potentially getting shot or having their brain bashed in himself:

What a performance by everyone involved!

A true masterpiece from beginning to end that I hear is already getting buzz at TriBeca (the neighborhood, not the film festival).