Slow internet day and with the White Sox still dangling around .500, I figured it’d be a good time for a mail bag.  A bunch of good questions came in.  Let’s get right to it:

Great question to kick off the mailbag.  Last night was Gio’s worst start of the year, though it wasn’t a terrible one.   The Cubs just out game planned him IMO.  He had 9 K’s in 4.1 IP, largely on his fastballs, and like most of the year was working fastball/changeup.  I think the Cubs game plan was to work backwards.  I knew a changeup was coming to Contreras on the grand slam, Contreras knew a change up was coming, and anyone who’s watched Gio pitch this year knew a changeup was coming.  When he got one, the obvious result occurred.

His fastball/changeup pairing has been very effective this year.  That said, teams may be starting to catch on to that.  This is where Gio needs to readjust.  His curve can be a lethal pitch too, as can his slider.  We saw what he did to the Yankees with it his last time out.  It’s just exceptionally hard to command 4-5 pitches for any pitcher over the course of an entire start.  But Gio has that in him – one day he’ll have all 4 pitches working and it’ll be lights out for whoever he’s playing.  Last night though?  The Cubs just out game planned him and McCann.  It happens.  Now he’s gotta bounce back and he will.

It’s Mount Rushmore Season on PMT right now, so I’d be remiss not to answer this question.  There have been a LOT of stinkers on the Sox.  Well, actually any fan of any team can do this.  Doesn’t matter if you root for the Patriots or some other dynasty, there are players on every team the fanbase loathes.

I’ll go with this:

Now, don’t let this be confused as a “worst player” list.  Yeah Koch was a bum, Laroche was god awful, yada yada. All the advanced stats say de Aza was okay and Samardzija was eh, but I fucking HATED watching those guys play baseball.  Shark was such a phony try hard.  FUCK him, that Region Rat dickwad

My hot take is that the White Sox buy to some capacity at the deadline.  No, they’re not going to trade prospect capital for someone like Trevor Bauer or another primo trade piece, but maybe look to take on a big contract like say…. Zack Grienke?  He’s old but holy shit is he a good pitcher.  He has as good of command as any pitcher in baseball and is only controlled 2 more years, so it’s impossible to be pissed with the deal, assuming they’d only have to give up a few lower level guys and take on his money.

Now obviously I do not think they’re going to sell either.  I think Colome is here to stay and the bullpen has been fantastic lately.  I said it in March, the pen is going to be the best unit on the team this year.  April stunk for them, but they’ve been lights out since then.  Herrera looks to be back to his normal self after a brutal May and Bummer has been a total revelation.

That said… maybe Hahn does load up on more prospect capital and trades pen arms?  Not sure.  I don’t want that to happen though.  This is the pen I want to go to war with moving forward.

On free agency: obviously starting pitching.  I don’t want, I NEED Cole Hamels.  He’s still awesome, I don’t want to hear shit about his age.  He’s arguably the best pitcher on a top 5 team in baseball as we speak.  He’ll get a high AAV from someone, but his years won’t be bad at all.  I think 2 with an option should get it done, taking him into his age 4o season.  Something like $20-22MM/ year.  Pair him with Grienke in my previous hypothetical, and that’s a rotation of Gio, Hamels, Kopech, Cease, Grienke next year with Lopez/Dunning/Rodon as depth.  That’s a good rotation and one that can win the AL Central with how many pieces the Twins figure to see depart.  FEED ME Cole Hamels

Anderson is a good SS.  I’d say above average.  Obviously his April was never sustainable and he was down to crash back to reality, but what he’s doing now should be.  I think he’ll settle in somewhere around a .275/.320/.775 player with 20/30 while they’re contending.  Not a superstar, but a really good player in the back half of the lineup.

In April he did a fantastic job of using the whole field.  He has gotten away from that recently and is pulling off breaking pitches again.  It’s very difficult to make that sort of in season adjustment as it’s both muscle and mental memory, but don’t be surprised to see him go scorched earth again.  He obviously has it in him.  Also… he only has 14 errors.  Not good, but he’s been fine after a shit defensive start to the season.  Seems like that’s the trend with him as well.  I love him as a defensive short stop however.

0.01% chance.  Madrigal MAYBE because he’s way more polished and doesn’t need as much MiLB seasoning.  Robert no way though.  I’d be SHOCKED if they called him up prior to mid April next year.

Blame the players.  I am FAR from a Ricky Renteria fan but these are Major League Baseball players we’re talking about.  They should know how to run the bases without a manager telling them what to do.  Leury Garcia has been totally fine this year as the Sox leadoff guy.  Far from their biggest issue.  But he is SO bad instinctively in the OF and on the bases.  I said it at the beginning of the year as well; he just does stupid shit non stop.  He seemed to have gotten away from it in April and May but he’s gone back to the “let’s make a mental error” well a lot more recently.

And Tim Anderson stealing 3B last night down 3 with nobody out?  Yeah that was awful but that’s totally on him. No manager on earth is telling him to do that.  That was just stupidity but I would bet he doesn’t let it happen again so it’s whatever.

haha no.  Hall of pretty good.  I love AJ obviously but he’s not a HoF in any stretch.  His best trait was his longevity which lead him to being 15th all time for hits as a catcher, 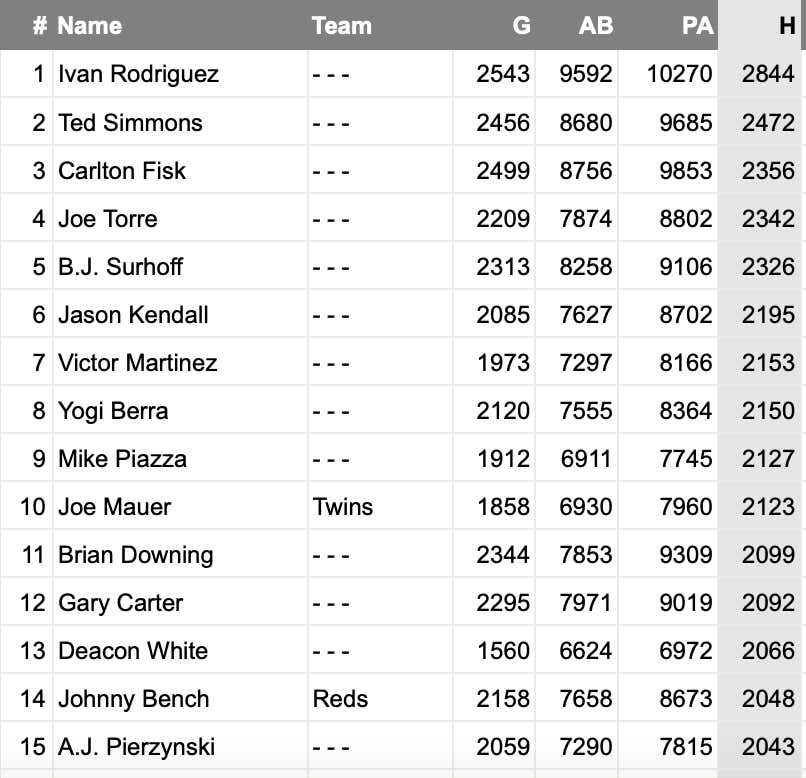 but nothing else he’s done screams HoF or even “Hall of Really Good” like a Paul Konerko type player.

You trying to hack my nudes Beefloaf?

Eddie and I are still fighting about this btw. If you like how Eddie hugs, @theclemreport on twitter will go down as the best hug I’ve ever received.