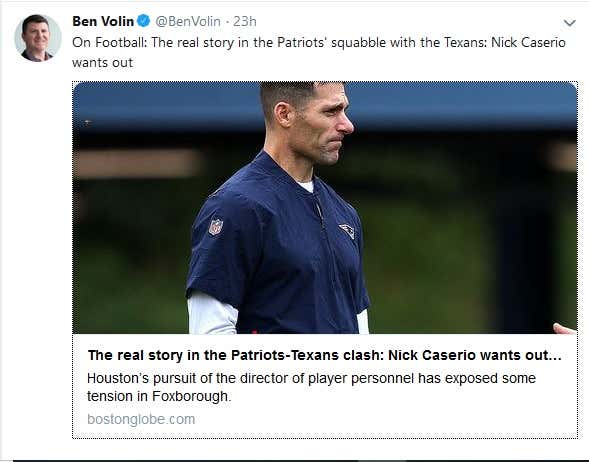 I can honestly say that if you asked me last week when we first heard that the Houston Texans were trying to pillage Bill Belichick’s longtime Director of Player Personnel how this would all play out, I would’ve had a few educated guesses based on a lifetime of observation and clinical research.

I would have guessed (and pretty much did at the time) that Nick Caserio would probably stay because the team wouldn’t let him leave. That the Texans would be charged with tampering. That the league would do nothing, no matter how guilty they were. That the local media would turn this into yet another false narrative about massive amounts of chaos and in-fighting within the organization. While ignoring true extinction level events going on with teams like the Steelers, Packers, Jets and Giants. And I think I can safely say without fear of contradiction that I’ve been pretty much right again.

What I did not see happening was that the football beat writer from the biggest media outlet covering the team would do a complete 180 on his coverage of the story based on what was being said by … me. But it happened. Ben Volin of the Globe went on WEEI’s Mut & Callahan and told them exactly that when explaining why he wrote that piece saying “Caserio wants out” and then admitted that was just his opinion.

Volin: “It’s a report. It’s analysis. We do this all the time and I think you guys mentioned it. If it were a positive story, no one would care. But it’s a ‘negative’ story so the Jerry Thorntons of the world are flipping out. …

Q: “So you on Houston radio Monday and say ‘This is my opinion, not a report.’ You come on hard here this morning and say ‘I actually stand by it. It’s a report.’ What changed in the last 24 hours where now you’re willing to stand by it. Did you get more information? Are you sick of people piling on? Because you have a different tone today than you had Monday night.”

Volin: “I was foolishly trying to minimize the Jerry Thornton damage of the world. And Twitter has been a cesspool the last 24 hours. And while everyone knows it’s a cesspool, having people lob bombs hour upon hour can get to you.”

First of all, I disagree that Twitter is a cesspool. I look at it as a garden.  It makes people happy to see it and work it in. Beautiful things grow in it. Nourishing things. There are animals, decorative rocks and statuary. There is also dirt. And crawling around underneath those rocks burrowing down in that dirt are some of the worst, most disgusting and foul creatures nature ever produced. Things you don’t ever want to look at or touch, but which are a necessary part of the ecosystem. That said, I like Twitter. I have a very good time in that garden and rarely get the gross, slimy stuff slithering on me. And when I do, I manage to take the bad with the good and just accept it’s how that environment works. But I understand why an old school journo might take exception.

What I can’t fathom is that any media person would disavow something they put into print just because they took heat from me. I’m flattered. But at the same time, frankly I’m a little disappointed.

This is the Boston fucking Globe we are talking about. The cultural institution that reinvented sports coverage a generation ago. The paper of record that once featured a 1927 Yankees-like Murderer’s Row of sportswriting. Will McDonough. Peter Gammons. Leigh Montville. Ron Borges in the days when he was breaking Patriots stories and not just Ctrl+C-ing anything that made the team look bad. That sports page was a must-read on a daily basis. From the headline at the top of the fold all the way back to the greyhound racing results.

A guy like McDonough would never have gone on a radio station doing a backpedal that would put Mike Haynes to shame just because he was being questioned by another writer. Namely me, of all people. He might have told me to go slam my laptop on my dick or take a swing at me (like he did Pats Hall of Famer Ray Clayborn, who started the fight). Then we’d maybe go toss back a drop o’ the pure at Doyle’s in Jamaica Plain or someplace. But back off his reporting? Unthinkable. Back then men had a little thing called the courage of their convictions and drilling rights to your ass, pal. So back off or suffer the consequences.

It’s sad to see how the mighty have fallen. Sadder when you consider I get along with Ben Volin. I drank to hangover excess with him at a Super Bowl media party a few years back. We’ll talk in the media tent at practices. I’m not one to go all ad hominem at him or any one else for their wild speculation and incorrect claims disguised as fact. I simply call bullshit on false reporting and unsubstantiated stories. It’s more than my job. It’s my calling. Whether the stories are from Volin, Felger & Mazz, ESPN, the Palm Beach County prosecutors, Seth Wickersham, Jon Tomase, Ted Wells or anyone else.

And when I do, an army of monkeys tends to fly out of the witch’s castle, pounce on the person spreading the fake news and pull the stuffing out of them. That’s how the Patriots fanbase operates on the internet. It’s part of the fun of being emotionally attached to this team. And has been entirely necessary given all the garbage that’s been thrown around over the last 20 years. I don’t ask that anyone change their stories because they don’t want to deal with the response. All I ask is that you stop me when I say something that doesn’t turn out to be true. I’m still waiting for that.