Source - A high wire artist who smashed all the bones in her face and was lucky to escape with her life after falling in a five-person human pyramid has shared photographs of her injuries as she prepares for her next stunt.

Lijana Wallenda, of the famed Wallenda circus family, broke every bone in her face as well as a rib and some bones in her foot when she fell 40ft to the ground in 2017 while training.

She has been training since then to recover and on Sunday night, will walk across a high wire between two Times Square skyscrapers with her brother, Nik. They will not use any harnesses and there will be no safety net.

Good to see carnies are living up to their stereotype. Small hands, smell like cabbage, very little cognitive brain function. A blind loyalty to their craft despite the high risk of bodily injury and low starting/ending pay. They’re a strange people. Although I will say, they’ll do anything to get a rise out of the crowd. Which is great for us because anytime one of these stunts is televised it’s always wildly entertaining. Especially when the chance of death is so high. Lijana claims she’s been training for all possible conditions, but nothing can prepare her for the thousands of people that will be screaming her name as she walks three city blocks above Times Square. Here’s the route: 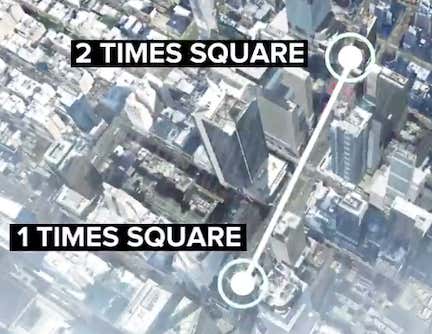 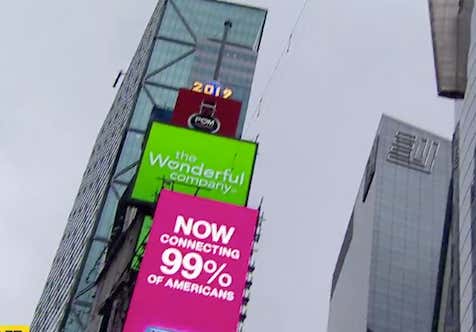 If it sounds like I’m rooting for her to fall, I’m not. I’m just saying that the odds are stacked against her. She’s going to be thinking of her fall every step of the way. How could she not? Her injuries were horrific.

In an interview with Good Morning America on Wednesday, Lijana described some of her injuries and shared photos of her face. ‘I broke a rib. Punctured my right ear canal, I broke my left calcaneus but the big one was every bone in my face,’ she said.

I don’t know why she doesn’t just give it up. The whole Wallenda family sucks at being carnies. They’ve been falling down ever since they started in the biz…

The Wallendas have cheated death for decades with their daredevil stunts but the incident in 2017 sent shockwaves through their family and the industry.

They were rehearsing in Sarasota for what would have been the largest moving human pyramid if they had pulled it off.  Terrifying moment performers fall during high-wire pyramid act Harrowing footage of the fall was taken by a truck driver who had gone to where they were rehearsing to drop off food.

Nik and Lijana’s aunt suffered serious injuries too. Her mother Carla told The Sarasota Herald Tribune: ‘She in so much pain.

‘She has a very, very bad limp, and one of her legs is two inches shorter than the other now.’ ‘She broke her right arm, her ankle, fracture her ribs, her pelvis, her cheekbone, jawbone, upper gum line and her sinuses.

It was not their first ill-fated stunt.  In 1962, the collapse of a seven person human pyramid in Detroit led to the deaths of two members of the family and a third was confined to a wheelchair for the rest of his life.  In 1978, Karl Wallenda plummeted to his death while performing a high wire tight rope stunt in Puerto Rico.

Despite the tragedies, the family has continued to pursue increasingly dangerous stunts.

Whatever. I’ll be watching this Sunday. Hopefully she makes it out unscathed, but if history is any indicator, she won’t. Best of luck, Lijana’s. Same to her brother Nik.