Now THAT is how you trade in your uniform for a fancy suit and climb the ladder of the department escalator style. You don’t get it by ignoring the commotion behind you or watching some trooper take down the bad guy. You do it by turning into Luke Kuechly and laying the lumber yourself with a perfect form tackle. You think Senior Sergeant Daren Edwards gives a shit about getting his hands and nice clothes a little dirty? Fuck no. That’s all part of the job. He lives by the motto See Perp, Hit Perp. That’s how you end up with microphones and a collection of members from the press in front of you as you break down the latest whodunit. By getting into the dirt when the dirt tries to run away, even if it means ending up with a little raspberry for your efforts. 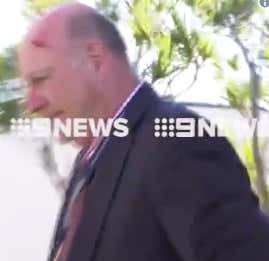 But none of the grime or the glory matters to a great detective. All that matters is breaking the case open as well as any criminals come along with it. Because as another great detective once said:

P.S. The performance by the alleged creep after getting arrested was LOL funny. I’ve laughed at the mere thought of him saying “Ahhhhh, Jesus Christ” three times since I started writing this blog. If he is found guilty of saying whatever he is accused of saying, he should be forced to face this dad in the octagon.