I guess The Bachelorette wanted to make my life easier so they only gave us an hour of an actual show last night. The second hour was a SEASON RECAP. Are we being punked??? It’s only Week 6 and we are recapping the whole season. I guess they had to drag the show out for another week for some reason?? They added a sit down interview with Hannah at the mansion that was clearly filmed after the show ended. It was beyond frustrating. Props to ABC for getting us to watch an hour of filler before the BIG PREMIERE OF GRAND HOTEL!!

In the first hour, we just saw all the guys argue and Hannah get mad. That was about it. She decided to keep Luke P. around after she told him she wants him to yell and show his emotions and we got THIS.

She let him stay but did not give him a rose.

HOW is Hannah buying this guy?! I just can’t believe it. It’s been interesting seeing other women on Twitter talk about being in gas-lighting relationships with guys like Luke P. Just totally in a dark cloud and can’t see that the man is emotionally draining and abusive. Hannah kept telling the guys that she needs to figure it out for herself, but it’s clear the guys have her best interest at heart and are genuinely trying to protect her.

Anyway…Garrett spent the whole episode sucked in the Luke P vortex. They argued about the same thing for QUITE some time. Garrett asked Luke P to not bring up any of their names on his one on one date. When he got back, Luke told all the guys that were in the room he didn’t do that. Garrett went to Hannah to ask if Luke did, and Hannah told him SHE asked about it and Mike, Dylan, and Devin’s names were discussed.

It’s tough to watch Luke P have so much real estate in Garrett’s head. I like Garrett. I think he means well. He clearly just really hates Luke and he just can’t stop talking about it…which never goes well on this show.

Garrett went back to the guys and confronted Luke about mentioning some names on his date. Luke continued to spew nonsense. I have to be honest, I really black out every time he talks. He just uses the same dumb buzzwords over and over and over again. Like if I was asked to explain one thing he said last night I don’t think I would be able to do it.

The fighting continued and the boys were gettin’ sassy.

Hannah was clearly fed up. She could hear all of them arguing and went to tell them all to STFU. She told them all that she was the one who asked Luke about certain guys. It’s frustrating to watch because Hannah was mad at the drama…and the drama comes from Luke P. Remember the group date last week without Luke P that was the best day ever? Yeah, that’s not a coincidence. Plus, all the other guys really seem to get along and there is just one black sheep of the group and it’s LUKE FRICKEN P.

She came back into that room guns blazing.

Obviously Hannah wanted the guys to focus on her instead of worrying about Luke P. However, that’s damn near impossible. Luke just kept going and going and going…and Hannah told him to shut it.

Beast Mode Hannah is out and she’s telling everyone to STAY IN YOUR FREAKING LANE. 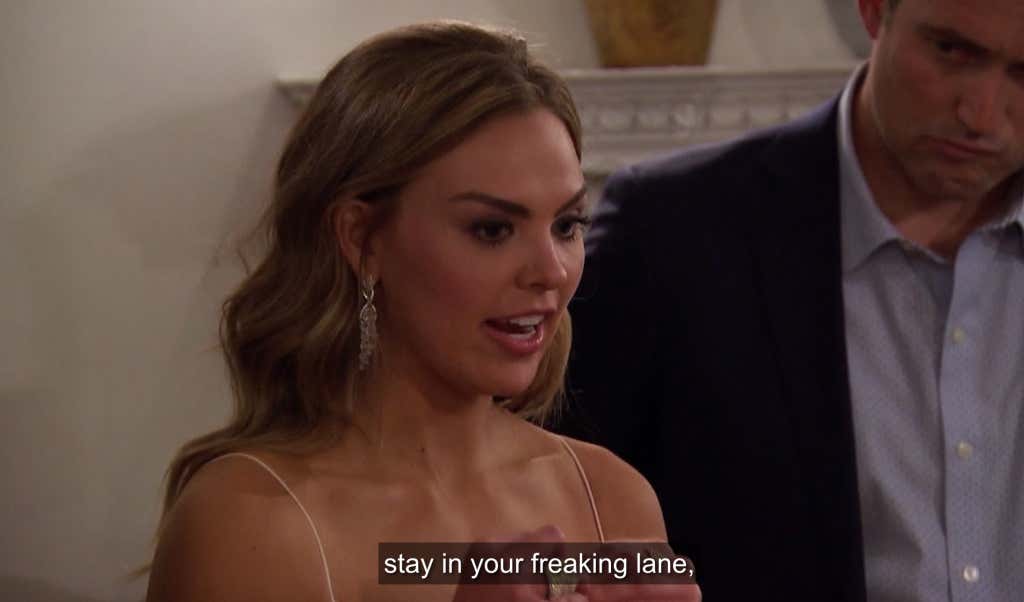 Hannah left the room and the guys STILL went at it. You know who I feel bad for? Sweet Pilot Pete. All he wants to do is make airplane/flying puns and make out with Hannah on pool tables and these other guys are ruining that for him. 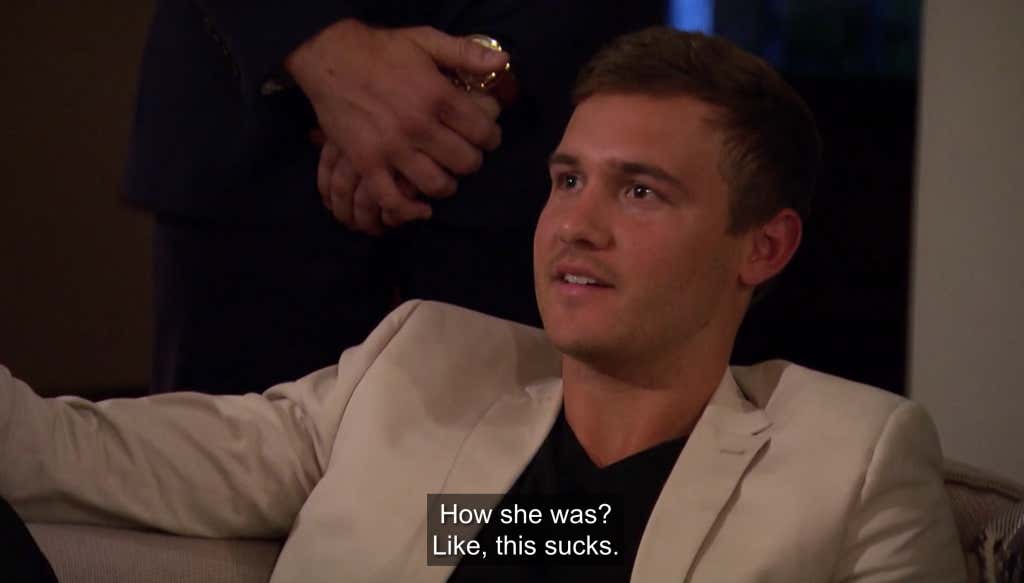 Garrett and Luke P were STILL going at it and it led to Hannah chugging her drink and heading back down to put an end to it.

Hannah told the guys to focus on her, not worry about other conversations, and not worry about Luke P. She also said that it wasn’t just Luke making her psycho and irritated…it was all the guys. Well Hannah, you’re irritated with the other guys BECAUSE OF LUKE P!! Look, I know Garrett is pointing all his fingers and toes at Luke and that’s not a smart thing to do. I realllyyyy don’t think these guys would be annoying Hannah so much if Luke wasn’t there so, yes Hannah. It is just Luke. Send him home and see if you’re still so irritated.

In a hilarious moment, Garrett apologized to the group for focusing so much on the drama. AND LUKE ACCEPTED HIS APOLOGY. Just made it completely about him. I actually yelled OHH MY GOD at my TV during this “acceptance” speech Luke threw out there. “I had important things to tell her. And SHE had important things to tell me.” Oohhhhhh shut up. Luke, once again, making it entirely about himself. Hey buddy, Garrett wasn’t apologizing to you, I can guarantee that. 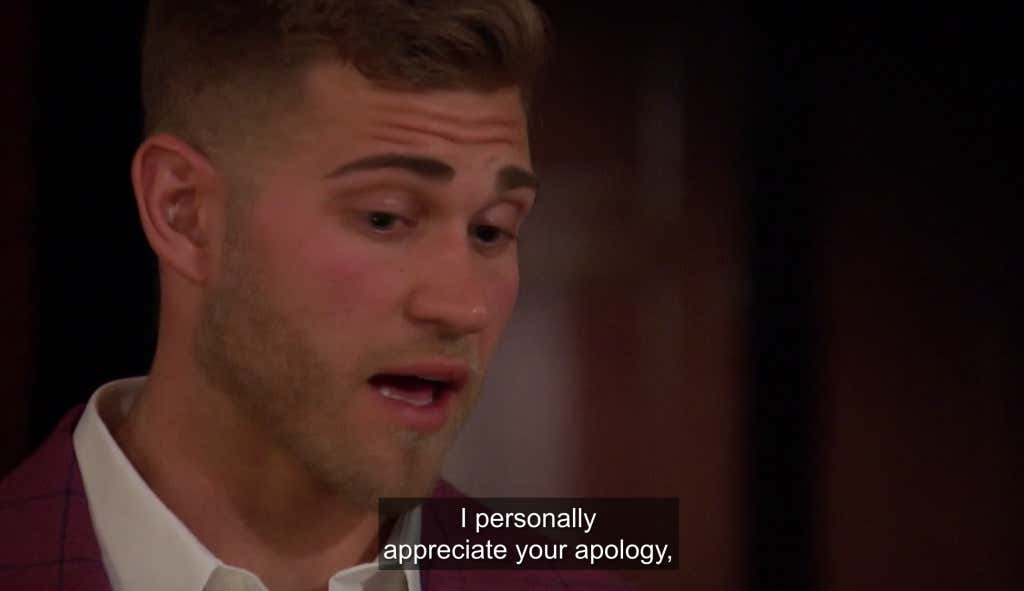 Obviously we got a great Chris Harrison moment that was sadly overlooked because of the dumb recap portion of the episode. Hannah was crying, Chris was there to save the day and give her his pocket square and share some words of wisdom. He told Hannah that the guys are so frustrated with Luke because they DO care about her so much. Preach.

At the rose ceremony we lost Kevin, Grant, and Devin. At this point we are still sending home guys that I think wouldn’t end up with Hannah anyway…but once she starts keeping Luke over guys like Connor S???? My head will explode.

Hannah was pissed off but off they go to….Latvia!

We were ACTUALLY watching clips of Hannah joking around with Jonathan at one point?! I’d bet most of you don’t even remember who Jonathan was. That’s not what you want to see.

Chris asked who was the best kisser/who she wanted to kiss all day long and I remembered how awesome some of these guys are but then she said………Luke.

We were reminded that Hannah had only kissed five guys before this show!

We spent 5 minutes listening to Hannah name a pimple on her face.

The best part of the episode was the preview for the rest of the season!! Helllooooo Tyler C!!!

It was barely a preview and more of a “don’t worry Luke will leave” since we basically watched him self-destruct in it’s entirety. So this show just got even more frustrating because who knows how many weeks we have to watch before Luke decides to slut shame her.

I for one, am looking forward to watching her naked bungee jump with Garrett. Plus, someone wants to propose early?? It would be wild if that was actually one of the contestants. The only person I could see doing it is Luke P. Maybe someone from her actual past comes back?? Who knows.

I was so furious at that season recap bullshit, but obviously you just get pulled right back in with that promo.

– It is too good that Chris Bukowski is on this season. This is now his SIXTH appearance on a Bachelor franchise show. He was on Bachelor Pad for Christ sake.
– I’m already annoyed by Nicole and Onyeka’s incoming drama.
– I hope John Paul Jones finds love.
– Who the heck is Jane??
– Gonna need an early departure from Cam (I have a bad feeling Annaliese and Cam are going to hit it off).
– 11 ladies and 8 guys are listed…let’s hope for some good additions from Hannah’s season to pair up with our favs from Colton’s season.