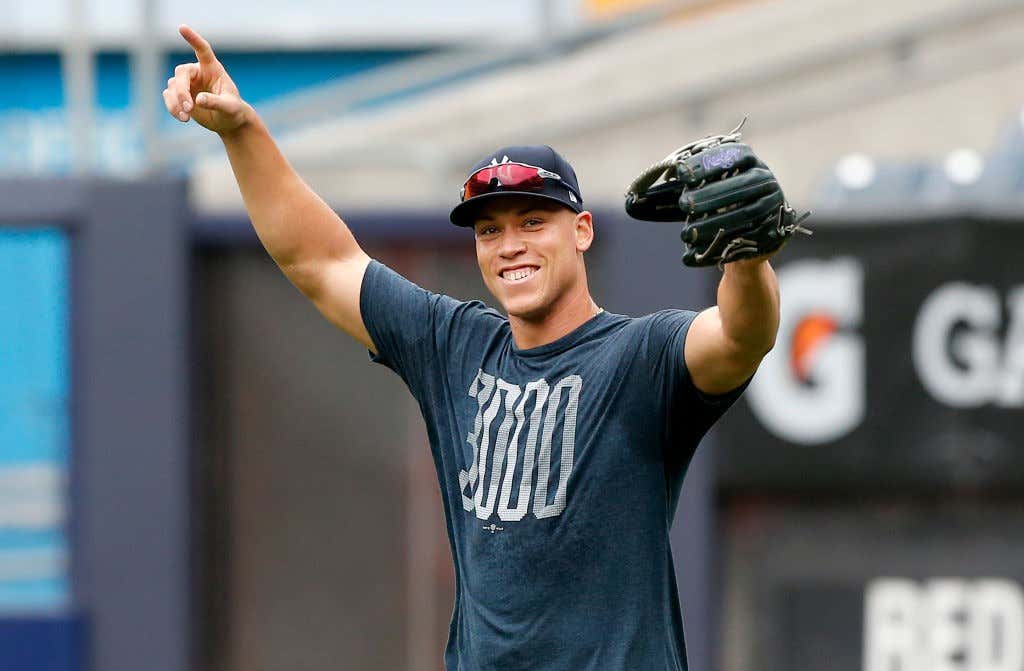 For two months the few Yankees left with their limbs intact were given one plea: survive. Just stay in contention long enough for everyone to get back. If you can be within six or so games of first we’ll take it. Those instructions were given to Luke Voit, Gleyber Torres, DJ LeMahieu, Gio Urshela and Gary Sanchez. Those are the five big names who have relatively stayed healthy and kept this ship afloat. Obviously Gary missed two weeks with a strained calf, but for the most part he’s been here, and he’s been elite.

When we watch the World Series DVD together in the offseason there will be a special dedication to Voit, Torres, LeMahieu, Gary Sanchez, Gio Urshela, Cameron Maybin, Gardner and Clint Frazier for what they did to keep the season alive in these two months. You can’t win the division by June 17th, but you can certainly lose it. Given the amount of injuries this team has had, I think most teams would be done. They’d be something like 10 back with little to no hope of salvaging the year. The 2019 Yankees? They’re a half game in first over Tampa, and up 5.5 over Boston (7 in the loss). It’s nothing short of remarkable. And now what happens? Now the real fun starts.

This week, starting today, the big guns return (or debut). Today Edwin Encarnacion debuts in pinstripes. He’s casually leading the AL in homers while also having driven in 49 runs. He’s a ticking time bomb at the plate. At any given moment he can launch a ball to the moon. The Yankees traded a no-name prospect for him. That’s all it took. Credit to Cashman’s great relationship with Seattle’s Jerry Dipoto. Seattle was running their fire sale and one of the first calls he made was to the Cash God. It was a trade that he simply couldn’t say no to. All it took was for New York to pay a little more than what Tampa was offering. What is Tampa’s punishment for not offering a little more money? They get to face that guy this week.

Tuesday. After Edwin debuts and probably hits a home run on Monday, the Yankees get back Giancarlo Stanton from his numerous odd injuries. He’s finally healthy and ready to destroy baseballs. I always thought 2019 would be his coming out party in New York. You always need a year to adjust to playing in New York if you’re a big superstar. Now obviously by missing so much time he’s not going to post a 40 homer season, but can make a helluva impact that’s for sure. G is here and he’s ready to fuck. And don’t give me that nonsense that him returning will fuck things up. The moment you say that is when I realize you have no idea what you’re talking about, or you’re a terrified troll like Carrabis. Adding Giancarlo Stanton to this lineup, replacing a guy like Brett Gardner is incredible.

Then after they add Edwin and Giancarlo, a few days later, probably more like early next week will be Aaron Judge’s time to shine. Yeah, we still have that guy. One of the best all around hitters in Major League Baseball. Yeah, he’s back. Sidelined with what appears to have been a grade 2 hamstring since April 20th, Judge returns. The leader of this organization. The heart and soul. The future captain. He’s back.

So what the hell is this lineup going to look like? If you’re a Yankees fan get ready to laugh.

I mean that’s a joke. How do you make it through that lineup three times with your head still on your body? That’s a lineup that ends careers. Everyone besides DJ, is expected to have a wRC+ over 100. That’s essentially the best tool to measure how good a hitter is, factoring in ballparks and every aspect you need to. 100 is league average. Anything above is thus, above average. LeMahieu is projected at 98 right now, and I think we’re all perfectly okay with what he’s been doing for us. Everyone else is above 100. Have fun.

I do want to say, I’d much rather a bench with four guys: Austin Romine, Brett Gardner, Gio Urshela, and Cameron Maybin. I hope that’s the plan. I really want Cameron Maybin to stick with this team. He’s been incredible and I think along with his hitting and fielding, his speed could play a factor down the stretch as a pinch runner, since Tyler Wade just isn’t a thing anymore. Maybin has carved out a role on this team, after being a forgotten man stowed away in the Indians minor league system. Keep Cameron Maybin.

Now everyone is going to say what about the pitching? Well, Cashman is going to try the Phoenix Suns rout of scoring the MLB version of 140 points a game. Just kidding, but seriously maybe? No, there is a bigger trade coming in the coming weeks. The Yankees will be able to offer a package with players like Estevan Florial, Clint Frazier, Deivi Garcia, Thairo Estrada, Albert Abreu, and more. Those guys can get you anyone you want. The names out there will be Bumgarner, Bauer, Stroman, and Boyd. The moment Max Scherzer becomes available Cashman is going to pounce like a lion. Something big is coming, but for this moment right now it’s time to score a fuck ton of runs and light up the scoreboard.