Source - Bella Thorne on Saturday posted a number of topless photos to her social media account after an alleged hacker threatened to release the images.

The actress’ Twitter account was apparently hacked on Friday. A number of tweets, some with racist language, were posted. The profile picture was also changed to a man. The tweets have since been deleted and the picture returned.

But, it seems it did not end there for the 21-year-old Throne.

“For the last 24 hours I have been threatened with my own nudes,” she said wrote in a note posted on Twitter with screenshots of text messages with the alleged hacker. “I feel gross. I feel watched, I feel someone has taken something from me that I only wanted one special person to see.” 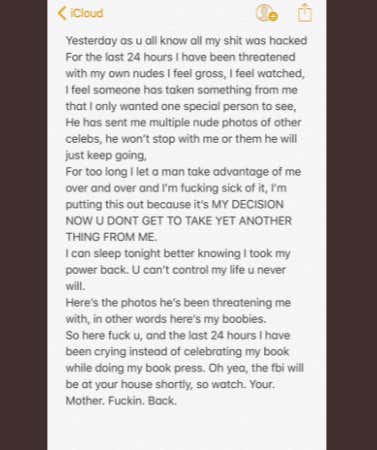 She also said the alleged hacker sent her nude photos he allegedly had of other stars. In her explanation, Throne said she would not allow the alleged hacker to render her helpless. “I can sleep tonight better knowing I took my power back,” Thorne wrote. “U can’t control my life u never will.”

Fuck. Yes. Bella. Beat ‘em to the story and you control the narrative. “Oh you want to release my nudes? Here ya go, world.” Obviously, I would never post them to the blog, but they are literally everywhere for those of you interested in seeing.  Honestly, more power to her. I can’t imagine how nerve racking it must be to have your phone broken into, especially when you have compromising photos on it, which at this point is literally everyone on earth. If you have a phone, you have nudes and if you don’t you’re a loser.

Regardless, I hope they catch the creep who did this to her and throw his ass in jail. He’s obviously got some serious mental health issues. Also, I’m considering getting nipple rings after seeing those photos. They’d make my boobs 1000x cooler. That’s all. Enjoy your Sunday!