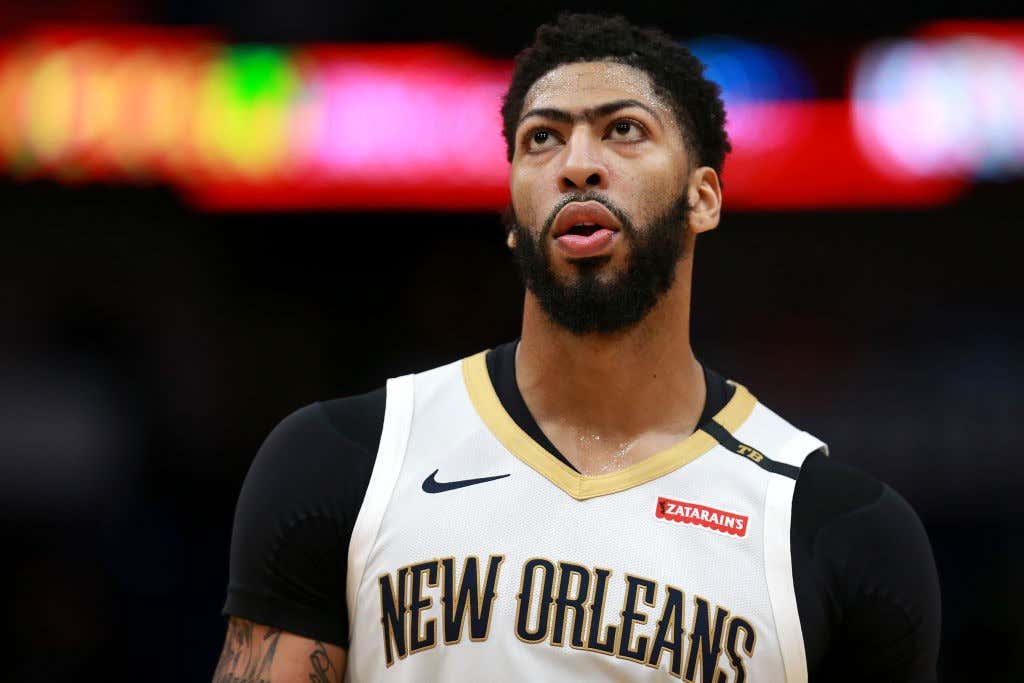 Woj bomb from the motherfucking clouds! Here we were enjoying a nice little Saturday minding out own business and with a press of a button the entire NBA may have just changed. We heard rumors for months about certain packages and different scenarios, then every Warrior got hurt and there was the thought that maybe some teams that were right on the brink would throw their name into the Anthony Davis sweepstakes and go for their own personal Kawhi Leonard type season. Of course the main contenders for Davis were the Celtics and the Lakers, and there’s no other way to say it, the Lakers were willing to put their nuts on the table and bring LeBron the superstar he very much craved.

They certainly paid a hefty price, and right off the bat you have to think this was the best possible offer on the table since the Pelicans despise the Lakers. They were able to hold onto Kyle Kuzma which was big for them since that was an early hold up, so maybe the inclusion of all those picks was the sweetener the Pelicans needed in order to pull the trigger. Honestly if you’re the Lakers you could give two shits about the draft picks, you have a limited window with LeBron and as we know he doesn’t give a shit about the future. They needed to surround him with stars at all costs, and that’s what this move does. They also have the cap space to add more which should make a number of teams with current free agents nervous. With the league wide open next season the Lakers went for it and maybe they add a Kyrie/Jimmy Butler type player to the mix as well.

Now obviously from a Celtics perspective it’s pretty clear what happened here. They know Kyrie wasn’t coming back no matter what and decided to not risk everything for a player who has been very open he would not stay. After the initial shock wears off, this was the smart move in the long run. Even if you think they take a step back and are back to square one (I don’t), Ainge couldn’t take the risk at the end of the day. As I always said there’s a difference between taking risk and being reckless. Enough of investing in players that don’t want to be in Boston, the reward of the roster with AD doesn’t guarantee a title by any means so I have no problem with this approach.

Obviously though, the point of this entire rebuild and plan was to accumulate assets to turn them into franchise players. That I think we can all agree has been a failure now that the whole point was to get AD. Ainge has to take wear that L and take all the clowning that’s sure to come on the internet over the next few days. At least now we know the direction the team is going to pursue, and who knows what may become available over the next few seasons. Think of the positives, we don’t have to deal with another year of drama and Rich Paul antics, and can now focus on building around their young talent which you’ll remember is pretty fucking good. Don’t let that get lost, this isn’t a rebuild that’s starting from scratch, there are real pieces already in place.

We now turn our attention to Al Horford and his June 18th deadline to either opt out, opt in to his $30M, or restructure for more years at lesser money. Pairing Anthony Davis with Kyrie was clearly Plan A, that shit’s now out the window so it’s onto Plan B. You may be mad Ainge didn’t overpay, but just take a deep breath. No matter what the Celtics look like next year, they avoided the absolute disaster that would have existed had they made this move and given up everything only to see AD bounce.

At the end of the day LeBron and Rich Paul got what they wanted, but hey at least he didn’t go to the Knicks.