ATTN: FROM THE DESK OF THE 2ND IN COMMAND TO THE EDITOR OF STOOL SCENES:

Alright people, we are back for the second week of the revamped power rankings. After I posted last week none of the higher ups said that I had to stop, so for now the show goes on. I really didn’t know what I was doing (still don’t) so I appreciate your patience as I continue to work through the art of writing with crippling ADD and dyslexia. But aside from my made up disabilities it was a big week at Barstool. The foreplay boys were at Pebble Beach for the U.S. Open, YP’s Blues defeated Bruins in game 7, and Drake reminded all of us why his acting career ended.

There were a lot of storylines this week but these are the winners that stood out to me.

5.) HOTTEST TAKE OF THE WEEK: Jack Mac On Klay Thompson

Listen, I’m a hockey guy so I don’t know much about basketball. I don’t understand what a foul is, I don’t know what a bonus is, and I don’t get why each team gets 400 timeouts. But I’ve been on the internet enough to know that 1.) Klay Thompson is good at basketball and 2.) this photo of him blackout drunk with a bunch of 6’s is all time. 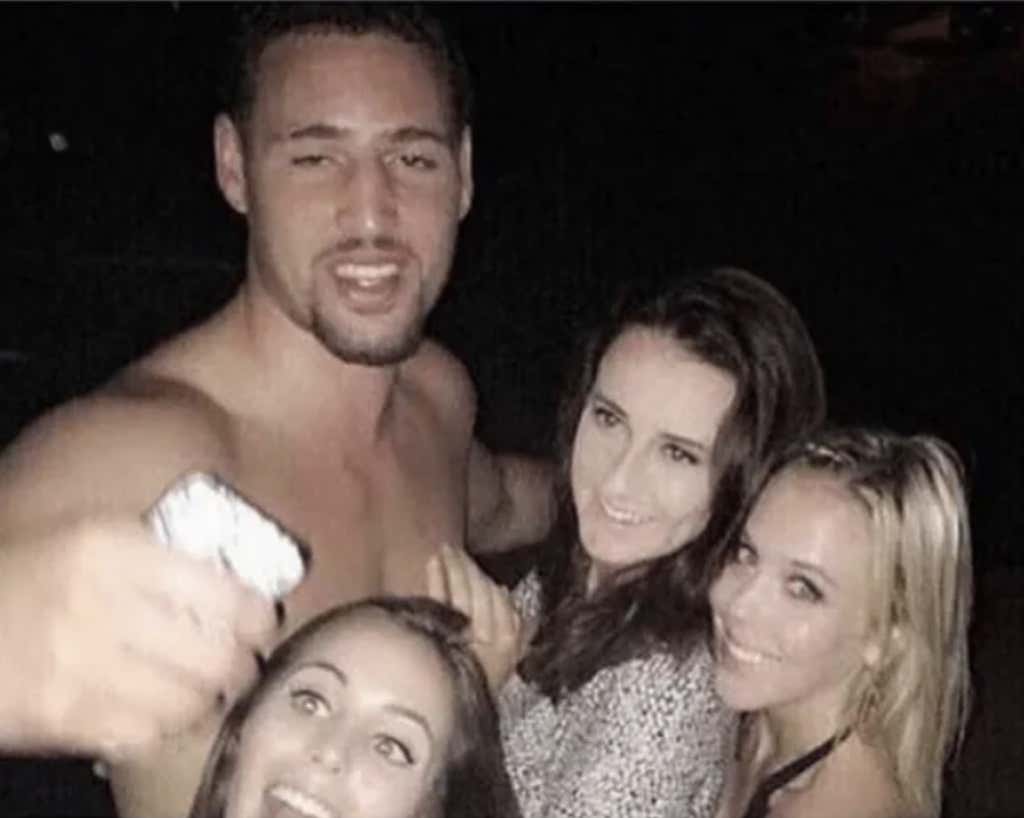 So to really understand how inflammatory this take was, I had to ask Big Cat who the worst player was that Jack Mac ranked above Klay. He said all of them. I said I need one. He said Khris Middleton. I said who the fuck is Khris Middleton. He said he’s significantly worse basketball player than Klay Thompson. And I walked away wondering how anyone could spell Khris with such reckless abandonment. Point is, if I know it’s a bad basketball take, it must really be tough. Also the name “Khris” made me think of one of the greatest things I ever saw on the internet: 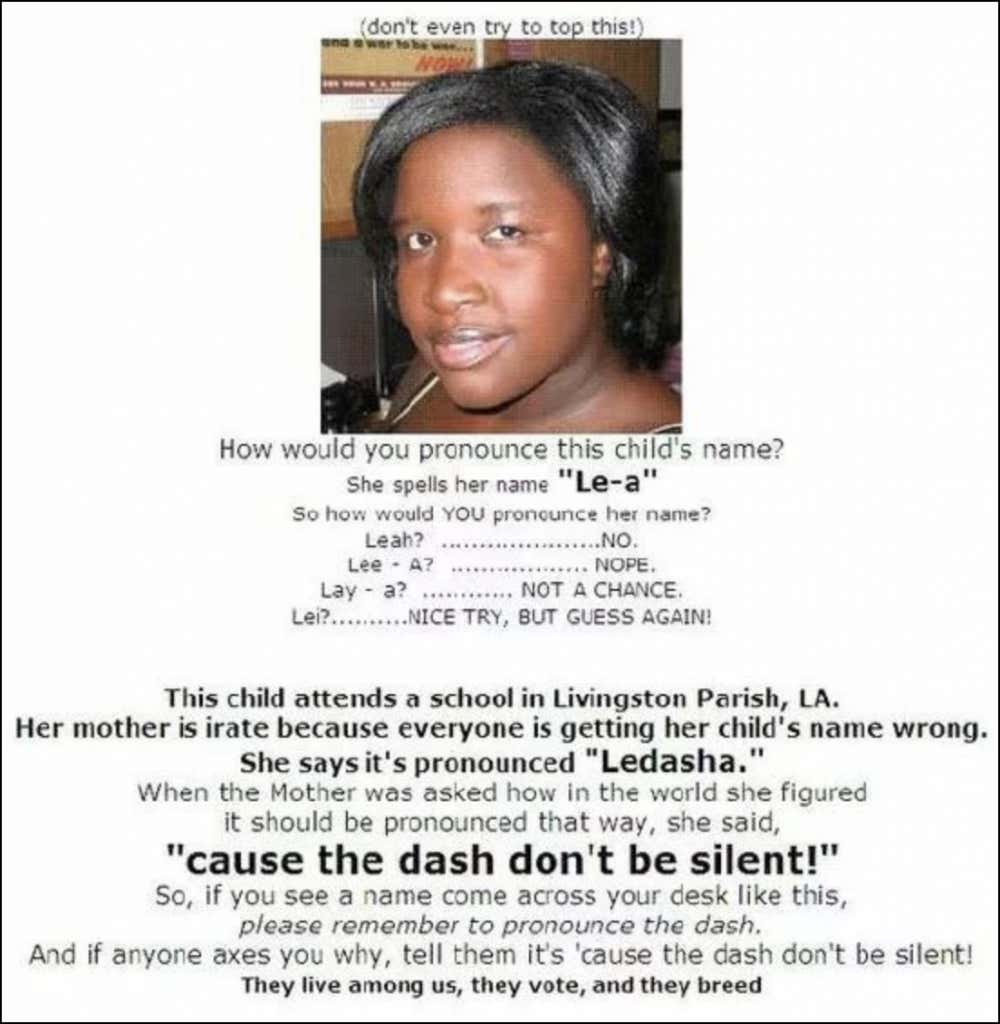 Weird names aside, Jack Mac knew he was in for a war.

What happened in game 6 certainly did not help Jack Mac’s claim as Klay put up 30 points by the third quarter, had his ACL snapped like a glow-stick, left the game, realized he had to take 2 free throws, limped back onto the court, drained two free throws directly in Jack Mac’s eye, and then called it a season.

It was simply tragic for my guy Jack Mac, as it seemed like Klay Thompson was personally saying “fuck you” to him. The only thing to do in this situation, is stay on the mound, throw a fast ball down the middle, and write an article saying Klay Thompson let his teammates down by having weak knees.

If you are not well versed in geopolitical joke climate of twitter, then you may not know that we got into a little bit of a situation with the fine people of Canada this week over a meme. The story in a nut shell is, after Kevin Durant’s achilles exploded there were a lot of people commenting on how Raptors fans were cheering at his injury. So we posted a well known meme that is of a bar celebrating at the world cup. This meme has been done a hundred times, you put something else on the screen so that the cheering by the crowd is funny, it’s meme 101. 

Well, apparently Canada did not get the joke and instead felt that we were actually trying to insinuate that this was a real video.

Those tweets are embarrassing enough but it would only get worse for Canada as Dave Portnoy saw an opportunity, pounced, and would not miss a shot for the rest of the encounter.

And while Davey Pageviews was running circles around the poor simpletons of Canada there was a full on investigation being launched.

I would rather get chlamydia for a third time than deal with someone trying to convince me that they got a joke that they clearly didn’t.

It was tough to see Canada go down like this, it really was. The world had forgotten about the 2011 Stanley Cup where they nearly burned down Vancouver and as soon as they get back into the limelight they publicly execute themselves again. Luckily Kawhi’s programming was too great for the Warriors to handle and the Raptors won so this can be buried in the history books.

Once upon a time, there was a female rapper named Tiko Texas. And Tiko was one of the most underrated wordsmiths of her generation. Well Tiko teamed up for a rap battle, with a tone def blogger named Dave Portnoy. Their mission was to take down former keyboard warrior, KFC, in a rap battle. The music that ensued will forever be remembered as some of the best sonics of the 2000’s.

Flash forward to 2019 and Tiko Texas returned to the office to haunt KFC as if she were Jayson Voorhees and he was a happy middle class family who just relocated to the woods. But unfortunately for Tiko, KFC was out of the office, so she decided to turn her attention to Nate for his recent involvement with O.A.R.

It was a real shame to see fellow musicians go at each other like that. But the arrival of Tiko was honestly one of the strangest things I have seen in my entire time at Barstool. In fact, it was 100% the strangest. The way she moved was like an over caffeinated spider, the way she spoke sounded like what I imagine a scarecrow does, the outfit she had on made her look like a grave digger, everything about her was simply jaw dropping. When she left I couldn’t help but wonder where on earth someone like Tiko Texas would go next. I have no answers.

See the full segment in this weeks Stool Scenes.

It is no secret that the Foreplay crew is obsessed with Tiger Woods. He is their deity, their messiah, their Yoda, their daddy, all wrapped into one elite package. So when they were in Pebble Beach for the U.S. Open and Tiger came over to talk to them it is safe to assume that they were all experiencing a group erection that could have been viewed from space.

Unfortunately the amount of blood rushing to their penis’ made it difficult for them to compute what Tiger meant when he asked where they were stationed. And to be fair, I would draw wood too if I met Tiger and I also have no clue what stationed means. But the boys played it off pretty well and were able to get through the conversation smoothly. 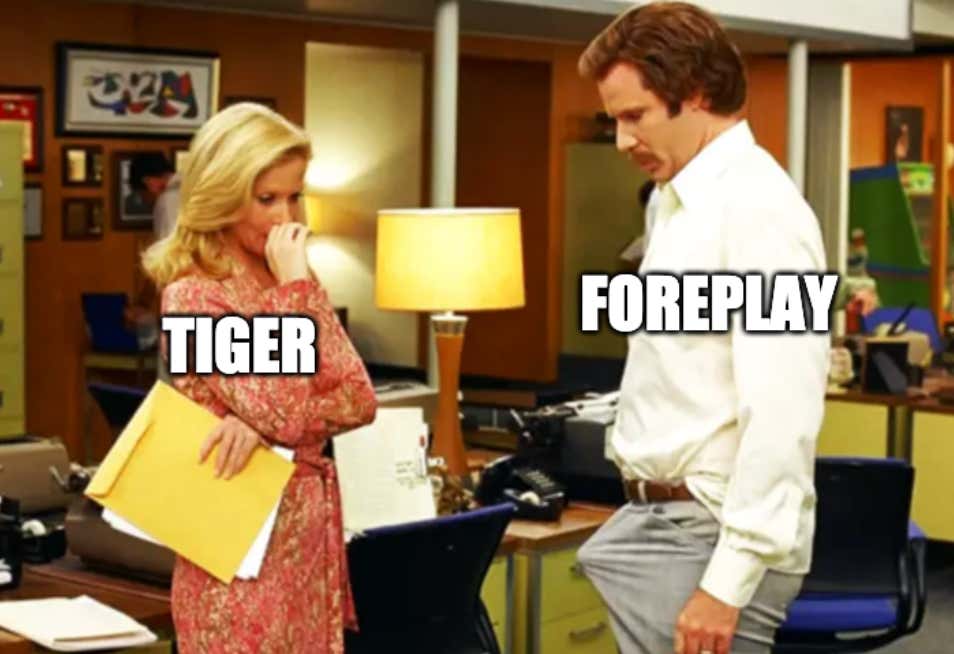 Ryan Whitney also joined the crew and immediately made it extremely clear who in the crew was a professional athlete.

Be sure to keep up with everything foreplay is doing at the U.S. Open this week on their twitter and on the blog.

Snapping a 52 year Stanley Cup drought has to feel as good as shamelessly peeing in a Las Vegas pool while peaking on MDMA, and right now YP is that guy. The Blues have reached the top of the hockey world on the back of his swinging penis and his chinchilla Boris.

As most of you know YP and Pat know how to party (in our office) so the celebration in St. Louis will be something that will go down in the history books.

Seeing Boris in the Stanley Cup, Pat Maroon doing a Pizza Review, and Jordan Binnington getting arrested for stealing game 7 is three exclamation points on a resounding win, and an unbelievable run for YP. The feeling of euphoria he is experiencing right now is probably unheard of and it couldn’t be better timing with Barstool Outdoors coming out soon. Congrats YP.

Get your blues merch: HERE

Guys being Dudes Clip of the Week: KB vs. Jay Glazer

Good cause of the week: Blogs for Dogs 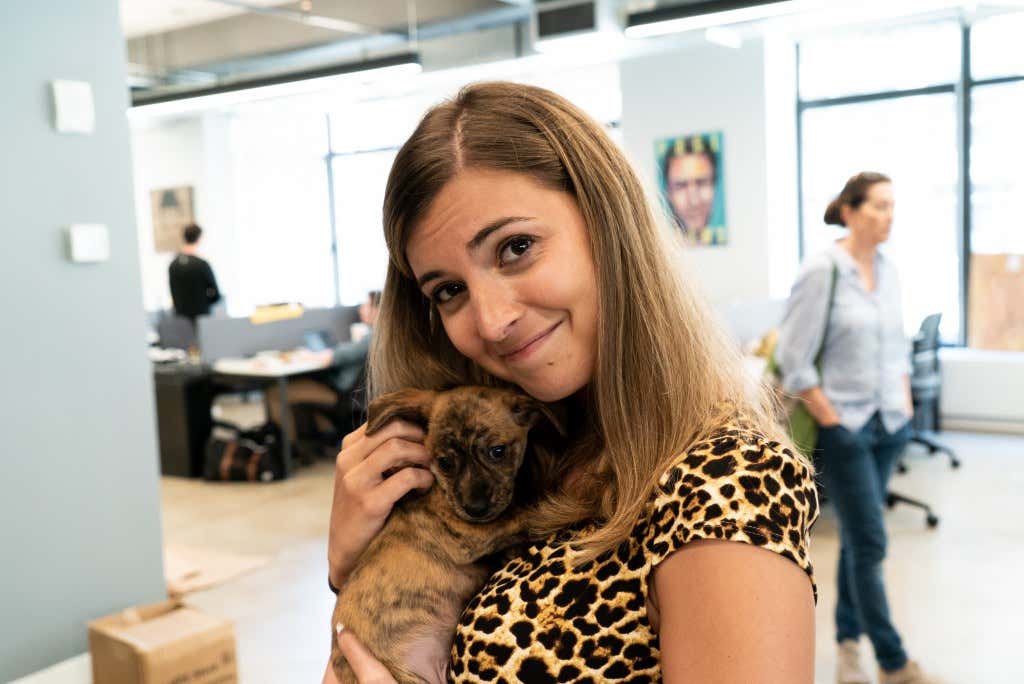 The Barstool crew and about 20 rescue dogs will be hanging out at Pig Beach in Brooklyn from 6-9 on Wednesday, June 26th to raise money and awareness for Social Tees – a not-­for-profit, strictly no-­kill organization here in NYC that rescues over 3,000 abandoned dogs and cats per year from kill shelters and provides them with safe haven and veterinary care before placing them in proper forever homes. It is a great cause and the auction will give you a chance to tag along for some cool experiences like a pizza review with Dave. Who knows, you may even get lucky and see Dave tee off on Tyler O’day for his wardrobe first hand.

But that’s all she wrote folks. I’m off on a flight back to Denver for victory lap at graduation and hopefully I can avoid a fourth round with chlamydia.