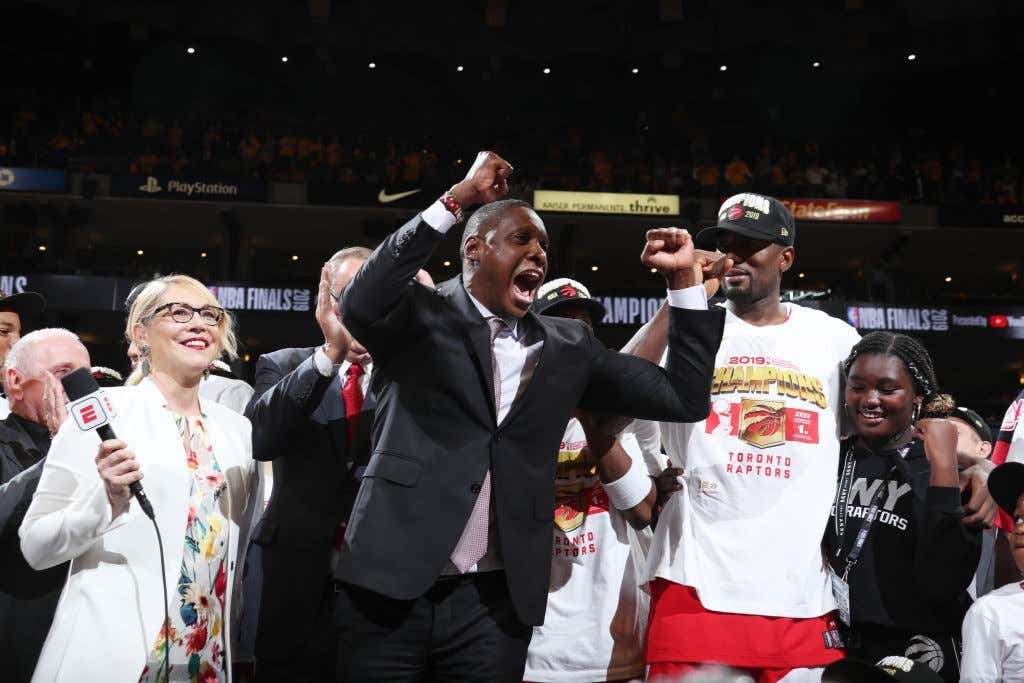 (NBC Bay Area) – A sheriff’s deputy was allegedly pushed and struck in the face by a Toronto Raptors executive who was trying to make his way to the court after Game 6 of the NBA Finals at Oracle Arena Thursday, the Alameda County Sheriff’s Office said.

The incident occurred moments after the Raptors defeated the Golden State Warriors to give Canada its first-ever NBA championship. Sheriff’s officials said the deputy denied the executive access to the court because he didn’t have proper credentials.

Witnesses on the scene tell NBC Bay Area the Raptors executive involved in the altercation is Masai Ujiri, the team’s president of basketball operations and former general manager

Deputies are calling the incident a misdemeanor battery on an officer and they, along with the Oakland Police Department, are investigating the matter.

The executive is not in custody, but officers plan to hand the case to the district attorney, officials said.

There are a lot of way you can celebrate once your team finally wins their first ever NBA title, although I would not recommend one of those being a situation where you get into a physical altercation with police (allegedly). Those videos make it kind of hard to see what happened but it’s clear something went down after the final buzzer with Masai Ujiri. Pretty crazy turn of events for him last night, his ultimate risk of going for it and trading for Kawhi worked out and they actually won the whole damn thing, the Wizards are prepared to offer him 6/60M to run their franchise, and then there’s this. Talk about a wave of emotion.

You can tell once he gets to the floor he has this blank look on his face. Maybe that’s the shock of winning combined with the reality that he may or may not have done something he shouldn’t. It was almost as if he couldn’t really enjoy the moment initially, he practically ignored Kyle Lowry when he pulled him onto the floor. Now I know that deputy sheriff was just doing his job preventing people from getting onto the floor, but I mean you sort of have to know who Masai Ujiri is right? Maybe that’s just me because I follow basketball, but I feel like he’s a pretty recognizable dude given the fact we’re at the NBA Finals here. On the other hand the Bay Area is filled with guys in suits who love to get physical and too involved with players on the court so maybe this dude was on high alert.

What we need is someone from the crowd to chip in with a better video of this whole thing. How did it start? Was the cop being a hardo or Ujiri just being an asshole? He’s far too nice of a person I feel like for that to be the case. All I know is there are going to be a lot of people associated with the Raptors whether they are fans or executives who are waking up today andare going to check their phones and be filled with regret and embarrassment. Something tells me Masai Ujiri may be one of those people and he’s probably going to have a bit of a situation to deal with.

Whatever though, he’s a champion. It’s probably worth it to him.