The New York Rangers end 54 years of frustration as they win their first Stanley Cup since 1940. The Rangers needed seven games to beat the Vancouver Canucks after losses in Game 5 and 6. In the finale at a tension-filled Madison Square Garden, the Rangers get two goals from Mark Messier as Mike Richter survives a third-period surge to help the Rangers get a 3-2 win. 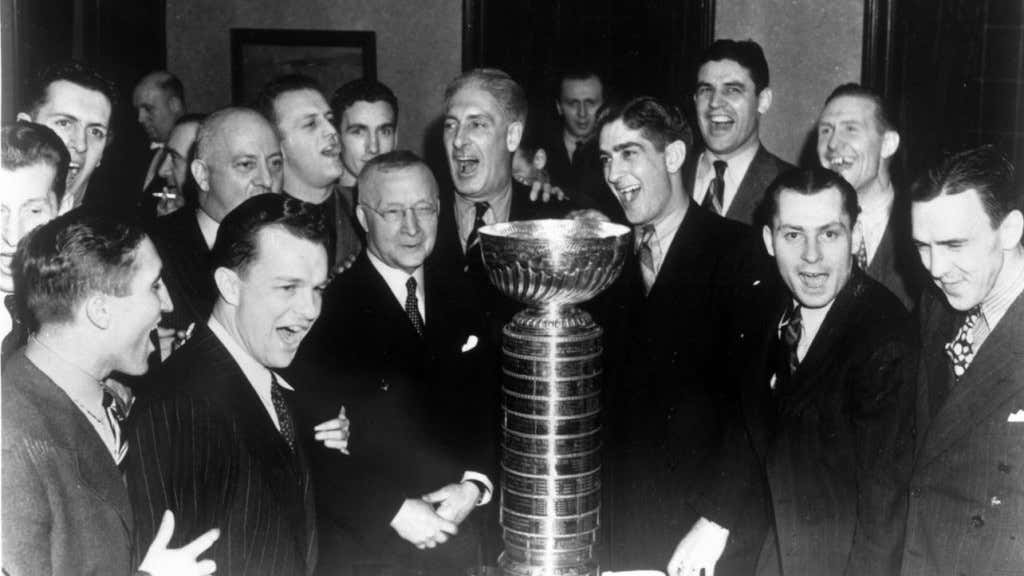 No team’s fanbase had suffered more than the loyal fans of the New York Rangers. Winners of the Stanley Cup in 1940, they had a half-century of frustration that included 1950, when they lost Game 7 in double overtime as they played the entire series on the road against the Detroit Red Wings due to the circus. Many seasons, the Rangers would fight for last, as they had trouble finding stars in the days of territorial rights. It was said they were cursed by Red Dutton former player and later owner of the New York Americans. The Americans were the NHL’s first team in New York, but the Garden owned Rangers always curried favor with the city’s fanbase.

After winning the 1940 Stanley Cup, the Rangers paid off their lease to Madison Square Garden and celebrated by burning it in the Stanley Cup. They also evicted Red Dutton’s New York Americans. The Americans attempted to move to Brooklyn, but after Pearl Harbor, plans for a new arena were scrapped forcing them to suspend operations in 1942. After the team folded Dutton was said to have placed a curse on the Rangers. Among the Rangers organization was Lester Patrick the team’s President and General Manager. The Lester Patrick Award was later created for inductees into the U.S. Hockey Hall of Fame. In 1993, Red Dutton won the Lester Patrick Award, perhaps somehow reversing the curse?

The New York Rangers were looking to bounce back after a disappointing season as the 1993/94 season began with Mike Keenan taking over behind the bench. The Rangers would win the President’s Trophy as the best team in the NHL for the second time in three years with a record of 52-24-8. In the playoffs, the Rangers obliterated in the New York Islanders sweeping the series, with a combined score of 22-5. The second round was nearly as easy as they took down the Washington Capitals in five games. The Eastern Conference Finals were anything but as they staged an epic seven-game war with the New Jersey Devils. Down 2-0 in Game 6 and facing elimination, the Rangers got a hat trick from Mark Messier who guaranteed a win in the Meadowlands. The Rangers would then win 2-1 in double overtime on a goal by Stephane Matteau.

Coached by Pat Quinn, the Vancouver Canucks were an underdog all season in the NHL, as they entered the playoffs as the seventh seed in the West at 41-40-3. In the first round, they stunned the Calgary Flames, winning in seven games after trailing 3-1 with three straight overtime wins. They then beat the Dallas Stars in five and upset the Toronto Maple Leafs in five games, winning the finale on Greg Adams’ goal in double overtime.

With heavy anticipation in the air, the Rangers began the Stanley Cup Finals in front of their home fans. The Rangers clearly were the better team as Kirk McLean was under assault all night making 52 saves. However, Vancouver tied the game with one minute left on a goal by Martin Gelinas. They would win the game 3-2 on a goal by Greg Adams 19:26 into sudden death. McLean continued to confound the Rangers in Game 2, stopping 37 shots, as the Rangers held a 2-1 lead late, thanks to a shorthanded goal by Glenn Anderson in the second period. The Rangers this time would hold on as Brian Leetch put home an empty-net goal with five seconds left, for a 3-1 win.

The Pacific Coliseum was a madhouse for Game 3, as the Canucks came out flying as Pavel Bure scored 63 seconds into the game. However, after the Rangers tied the game, Bure was ejected for a major penalty after his stick caught Jay Wells in the face. Anderson gave New York the lead late in the first period. The Rangers would go on to win the game 5-1, as Brian Leetch scored twice. In Game 4, the Canucks again started strong scoring twice in the first period on goals by Trevor Linden and Cliff Ronning. The game seeming turned in the second period when Mike Richter made a brilliant save on a penalty shot by Pavel Bure. From there it was all New York, as Brian Leetch, Sergei Zubov, Steve Larmer, and Alex Kovalev scored in a 4-2 win.

Leading 3-1 with the Stanley Cup in the building, there was a buzz at Madison Square Garden for Game 5. However, the Canucks already rallied from down 3-1 in the postseason were not going to go down without a fight. Jeff Brown notched a goal in the second period to break a scoreless tie, as the Kirk McLean again was stellar in net. Vancouver extended the lead to 3-0 on goals by Geoff Courtnall and Pavel Bure in the third period. Sleepwalking all night, the Rangers suddenly woke up and scored three times to even the score. Just as the Garden was back in the game the Canucks stunned them back in silence as Dave Babych made it 4-3 just 29 seconds after Mark Messier evened the score. Vancouver would get tallies from Courtnall and Bure and win the game 6-3. Game 6 would be all Canucks as they got two goals apiece from Jeff Brown and Geoff Coutnall. As the Rangers left the arena Vancouver was in party mode, celebrating like it was New Year’s Eve.

Once up 3-1, the Rangers now had to play the seventh game at Madison Square Garden. Gone was the confidence, as the air was tense. This was it. This was the last shot a loss here and 1940 would ring forever in the heads on Ranger fans. Brian Leetch gave the Rangers a lead midway through the first period, while Adam Graves scored to make it 2-0. The Canucks got back in the game with a shorthanded goal by Trevor Linden in the second. Mark Messier would get the goal back as the Rangers led 3-1 at the end of two periods. Linden again scored in the third period to make it 3-2 with just over 15 minutes left. The rest of the game would be about survival for the Rangers as Mike Richter had to make several big saves including one after his glove fell off his hand. The clock seemed to go in slow motion, as one last face off win was needed. Taking the faceoff was Craig MacTavish the last player to not use a helmet in the NHL. MacTavish one of six former Oilers on the Rangers won the draw as New York celebrated its Stanley Cup championship.

Mark Messier laughed upon getting the cup, a sign of relief, as Brian Leetch became the first American born player to win the Conn Smythe Award as playoff MVP. Meanwhile, Sergei Nemchinov, Sergei Zubov and Alexei Kovalev were the first Russians to get their name on the Stanley Cup.