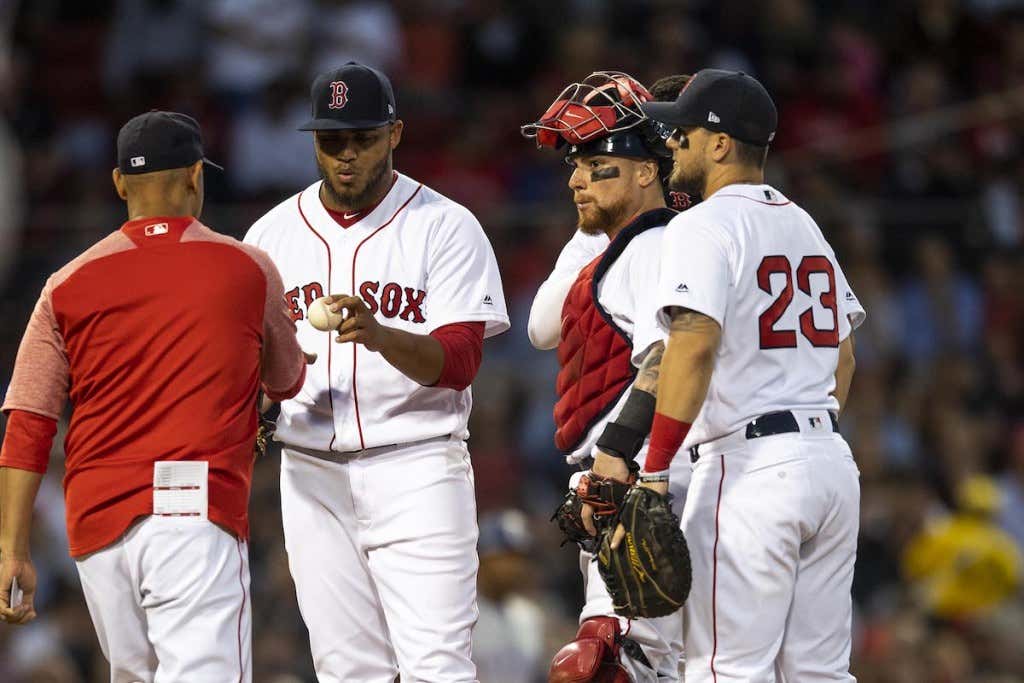 I just wanna start this by saying that if you’ve already given up on the Red Sox, then either you were ridiculously spoiled from last season, or this is your first full season of watching baseball. Or both.

It isn’t early anymore, but it’s not too late to turn this thing around. We’re not even at the All Star break yet. That being said, the Red Sox fucking suck right now. Emphasis on the “right now” part of that sentence. Teams like the Marlins, Royals and Orioles — they just suck. There’s no hope for them at all in 2019 or in the foreseeable future.

The Red Sox, on the other hand, are playing dog shit baseball, while also dealing with massive holes on their roster. Is it to the same degree that the Yankees have experienced this year? Hell no. So, in that sense, it’s hard to feel bad for them and make excuses. But the two major flaws on this Red Sox team are why they’re back to .500, eight games back of first place and three games back of a Wild Card spot.

We already discussed the ninth inning issue yesterday. We’re not exactly breaking news to Dave Dombrowski that this team needs a closer. I think we did, however, need to shine some light on the bullpen situation overall, though, because there was too much of a notion that the entire bullpen just sucked. That’s false. They’ve got some arms out there, and they’ve also got arguably the best shutdown group in the seventh and eighth innings in baseball. But you take those same guys and put them in the ninth and they poop their pants. Again, the Red Sox need a closer. Badly.

But the Red Sox didn’t have a game to even remotely consider worrying about having to close out on Tuesday night. They got their doors blown off. Top pitching prospect Darwinzon Hernandez got the start for Boston, making his first major league start. And things looked great at first, as he struck out the first four batters that he faced.

Alex Cora said after the game that striking out the first four batters might’ve been the worst thing that could’ve happened, because the young lefty then tried to strike out every batter that he faced from that point forward. Instead, he became erratic and everything blew up in his face. Kmarko asked me if he should take him in daily fantasy yesterday and I said, “Don’t. He walks a shit ton of guys.” Hernandez walked five batters in three innings, throwing more balls (44) than strikes (42).

That brings us to major flaw number two — the Red Sox need Nathan Eovaldi back. The Red Sox right-hander was last seen on April 17, holding the Yankees to one run in six innings in the Bronx. Since Eovaldi has been out, the Red Sox have used four starters who they otherwise never would’ve used had the rotation remained healthy.

Ryan Weber, Hector Velazquez, Josh Smith and Darwinzon Hernandez have combined to make 11 starts in Eovaldi’s absence with an 8.66 ERA, a 1.73 WHIP, 7.30 K/9, 4.33 BB/9 and a 2-6 record. In fact, three of the last seven games have been started by one of these individuals. Call me crazy, but I’d imagine Eovaldi would’ve put up better numbers had he been healthy.

Another problem with this team is that while the backend of their bullpen has been great outside of the ninth inning, they don’t exactly have a great crop of talent to turn a game over to if they need to be kept in games should a starter be knocked out early and a lead is not yet in hand. The 13 Red Sox relievers not named Matt Barnes, Brandon Workman, Marcus Walden or Heath Hembree have a 5.56 ERA with a 1.53 WHIP in 136 innings this season. I graciously left Eduardo Nunez out of that stat, who pitched in relief in Arizona earlier this season.

If there’s a silver lining here, these are correctable issues should Dave Dombrowski act fast enough to fix them. But when you’ve recently gone 2-7 against the Yankees, Rays and Rangers over the last two weeks, the teams that you’re chasing for the division and a Wild Card spot, then you’re not exactly instilling hope that one or two additions are going to take you from a pretender to a contender. The Red Sox are dead even at 34-34. To this point, they have been exactly what their record indicates. They are a blah team. Help could not get here fast enough.

Also, Cora was ejected in this one after Andrew Benintendi got tossed by the first base umpire for saying, “You fucking suck,” to Angel Hernandez. I mean, what are we doing here? First of all, Benintendi was walking back to the dugout. Second of all, there’s no way Hernandez could’ve heard what Benintendi said. Third of all, Angel Hernandez does, in fact, suck. Benintendi made the point after the game that if umpires ejected everybody who said what he said that there would be multiple ejections per game. This ain’t the Umpire Show, dog. Clean it up.