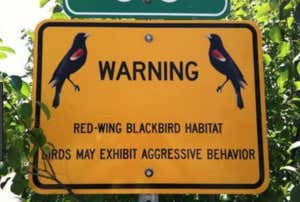 Block Club Chicago—Red-winged blackbirds are known to swoop down on people and attack during nesting season, which runs roughly from late May through mid-July. They do it in an effort to protect their nests, according to experts. They are highly territorial, aggressive to almost anything that comes too close, especially things that are bigger than they are and that they see as a threat, including hawks, crows, cats and people.

Ultimately the best way to protect yourself against red-winged blackbirds during nesting season is to “stay clear of the nest until the young fledges,” Mary Hennen, who works with birds at the Field Museum, said in an email.“If possible, post the trail with caution signs so people have a heads up. If you must pass by, do so quickly and do not linger in the area,” Hennen said. Her last piece of advice? “Wear a hat.”Oh, and don’t fight back. The birds are protected under the federal Migratory Bird Treaty Act, meaning you could face fines or jail time for harming them.

One morning last week, Adam Weisell was out walking his two dogs near where he lives along the Chicago River when something hit him in the head. Weisell immediately spotted the culprit: A blackbird with red shoulder patches. “He was still flying around,” Weisell said. Weisell turned around and started to walk away, but, just as he was beginning to process what had happened, the bird struck again.

Then, a day or two later, Weisell’s wife, Erika Tuttle, was attacked in the same spot, near Roscoe Street and California Avenue. “I was running and it landed on my head — like Alfred Hitchcok’s ‘The Birds,’ ” Tuttle said with a laugh. “I was like, ‘Oh my god.’”“There was a woman running towards me and I was like, ‘Did you see that?’” And while I said that, it hit me again. She’s like, ‘I”m scared!’”

So to recap here, everyone in Chicago is forced under law to kick back and take their beatings during blackbird business months. From May-June this may as well be their city while we’re all just trying to survive in it. They get to throw a Purge and we get to have our heads torn apart or else we get fined by the government, regardless of who started it. Might be amendment time. The current state of the city is Peter Griffin after he finds the endangered bird’s nest in his new beard and can’t destroy it otherwise he’ll get sent to jail, so he tries living a normal life to the best of his abilities in the meantime. Pretty outrageous guidelines to abide by when you find one of these things pecking your brain and just have to buckle up until it’s over.

I didn’t even know this was such an issue in Chicago until I was leaving Lincoln Park Zoo last week and began feeling my head splitting open. I thought maybe one of the imported birds managed to escape its exhibit, but now I know it was luckily just one of the local killer birds.

Shout out to fellow victims Matt and Erica who were brave enough to share their stories. If anyone’s trying to form a support group I wouldn’t mind knowing the details. In the meantime Barstool Chicago is here if anyone gets attacked and wants to step to the podium about it. Probably goes without being said, but it didn’t happen if you don’t record a video of it and send it to us. As for everyone else, strap on the hard hat until August and be ready to let a bird beat your ass.