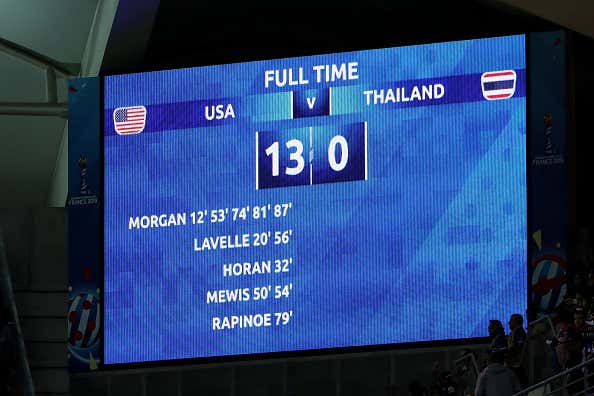 Since the USWNT is beating the everliving dog shit out of Thailand right now, I became quite curious as to how rare of an ass kicking this quite was. 10-0 is outrageous. They have since scored two more goals since my mind began wondering how dominant of a beatdown this actually was. Since I wrote that sentence, we now have a final score of 13-0. That’s a fucking Steelers-Ravens score from a dreary Sunday afternoon in 2013, not a World Cup soccer final score. Absolute SCENES on the pitch in Paris. But nothing, and I mean NOTHING, compared to losing 149-0.

That’s right. ONE HUNDRED AND FORTY NINE TO NIL. From a 2002 article filed to The Guardian:

The world record for goals scored in senior football, which has stood steadfast ever since Arbroath thumped Bon Accord 36-0 in 1885, has been smashed by a team from Madagascar.

Farcical scenes quicky led to a basketball score as league champions AS Adema won a match 149-0, more than quadrupling the existing record – and without gaining possession between the first goal and the 149th.

Their opponents, Stade Olymique L’Emyrne, took complete control of the national league game, reducing Adema to the role of onlookers, as they deliberately plonked the ball in the back of their own net 149 times, in protest over a refereeing decision.

I don’t care that they’re own goals. In fact, it’s really the only way that score can even begin to remotely make sense. I just love the fact that they hated this call so much that they told the other team to take the day off because they were going to do their job for them. The more I read into this story the less I respect the New Orleans Saints. You think y’all were mad about a call going the wrong way? You idiots still tried to win that game. And didn’t. At all. If they had the integrity of L’Emyrne then Drew Brees would have taken the first snap of overtime and ran straight backwards for a safety. But no. They decided to earn their loss the old fashioned way like dopes. You want to be taken seriously in the complaint department you better score on yourself ONE HUNDRED AND FORTY NINE TIMES in protest. Otherwise, cry me a river.