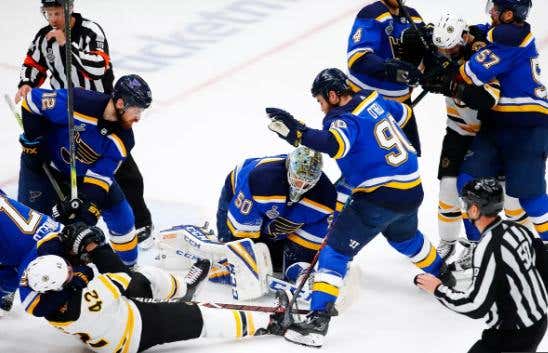 I have been absolutely miserable watching the Stanley Cup Final, but loving it at the same time as a hockey fan. It’s been a tremendous series, I just wish the uniforms were different so I could enjoy it more. Styles make fights and that same cliche can apply to a hockey game. These two teams want to play and attack you differently, but they have one overaching commonality and that is being bad the fuck ass. I know it’s the Stanley Cup Final and most guys would die to win and so the intensity is through the roof, but you can’t get to the point where you’re willing to give your life for the Cup unless you’ve been willing to play hard all along the way and these two teams have a TON of guys.

Chara, Backes, Marchand, Bergeron, Kuraly, O’Reilly, Bortuzzo, Maroon, Acciari, Krug, McAvoy, Schenn, Schwartz, Bozak. These guys aren’t all fighters, per se, but they’re all fucking nails. They’re hard in front of the net, they’re hard on the boards, they’re hard after whistles. They play mean and tough and smart, and will work and work and take punishment and block shots and do whatever it takes to win. It’s those types of guys who can not only wrestle a game back from the brink, but also a season. Those are the guys who steal and create momentum. Who are those guys on the Blackhawks now? Throughout the glory years the Hawks had toughness up and down their lineup. Brouwer, Versteeg, Shaw, Sharp, Hossa, Hjalmarsson, Rozsival, Oduya, Andrew Ladd, Dave Bolland. Those guys would do ANYTHING to win. They were championship type players who made people remember playing against them. Those types of guys make it easier for the top guys to do their jobs.

Championship teams in the NHL always seem to have the secondary players and supporting casts that are ultra competitive. That toughness seems to have been lacking in recent years. How many times have we seen guys win position in front of Gustafsson? How many times have we seen Forsling pull up? Schmaltz has all the talent in the world, but he didn’t have the right attitude or winning habits to be an impact player on a championship team. If there is one thing the Blackhawks need to do is to add THAT type of guy and do it the right way, and…they have a chance.

Ryan Dzingel is a UFA and someone who can play in the Blackhawks top 6. He has enough skill, speed, and smarts to play with Toews and Kane, but he has the toughness to be an animal in front of the net and to be a dog of the forecheck. He is the perfect winger for this team to sign. Plug him in on the LW for the next 4-5 years and don’t look back.

Brandon Saad is a very nice player who plays a responsible game and can be a good player on a good team. Having said that…if I am running a team and I’m paying someone $6M per year then he better bring it every single night. Saad is the 4th highest paid guy on the team. Has he ever felt like a true “core” player to you? He hasn’t to me. If you’re upgrading the top 6 this summer, and the Blackhawks better do that, then they need to trade Saad because paying him $6M to be a pretty good LW on your 3rd line, well there’s not enough value there in my opinion. Not for the direction this team wants to go. He was described as a “baby Hossa” when he first game into the league, but he doesn’t have Hossa’s brain, he doesn’t have Hossa’s shot, and he doesn’t have Hossa’s heart. Saad is just a very good left wing most of the time the Hawks need their 3rd line LW to be that dude every night out.

I really liked that trade, credit to Stan Bowman for getting Caggiula(and credit to me for giving Stan credit). Caggiula is like a poor man’s version of Dzingel and he really gave the Blackhawks some life with his skating, forechecking, and physicality. He is a really nice energy player and it seemed like the Blackhawks really started to miss him in March when they had a few must win game and teams were having an easy time breaking the puck out because the Hawks didn’t have enough guys who can make defensemen uncomfortable going back for the puck.

You don’t have to be Zdeno Chara or Colton Parayko to be a bad ass. Torey Krug is a really solid top 4 defensemen who seems to get better every year. Now, he’s playing 22 mins per night for a team on the brink of the Stanley Cup. He’s listed at 5’9. He made the NHL because of his skill and skating. He became a $5.5M Dman because he rounded out his game to be responsible with the puck, without the puck, and by being a hard ass guy to play against. The Blackhawks need another top 4 Dman, probably 2 more, and it would REALLY help this rebuilding process if Jokiharju became that guy for them by incorporating a style similar to Krug.