So last year I was on a straight up crusade against umpires and how they screwed over Moncada time and time again.  Night after night, Moncada was reprimanded for appropriately approaching an at bat.  It was really ass backwards and lead to him striking out 200+ times at about a 33% clip.  He lead the league in strike out looking by FAR and away last year.  You’d see shit like this with extreme regularity:

Now I said that the best way for him to combat this was to swing more.  Don’t swing at shit pitches, but when there’s a fastball in the zone, attack it.  A lot of young hitters have an issue with swinging too much; they’re so geeked up to perform well that they have trouble laying off pitches that won’t find the barrel.  They’ll have weak contact or no contact at all.

But that’s exactly what Yoan did – he swung more.  Lots more, as referenced by Fangraphs:

Now he’s still striking out too much, but he’s also swinging at hittable pitches more, and every single offensive number has exploded for him and he’s looking like the perfect centerpiece in the Sale deal.

But wouldn’t ya know it, Eloy is getting the same hose job too.  It’s fucking infuriating watching him perform his job correctly by laying off pitches that shouldn’t be called strikes, only to get fucked over with strike calls.  But the issue isn’t a mirror image of Moncada’s.  Moncada needed to be more aggressive on pitches inside the zone.  Eloy is already an aggressive hitter:

He swings 3% more than Moncada is this year, and Moncada has turned into a really aggressive hitter, as reference by his 9% increase in O-swing and 4% increase in his Z-swing rate.  Now in a perfect world Moncada would be at or around 24-25% for his z-swing rate and once he does settle around that number he’ll put up MVP type numbers, but Eloy’s fate is almost left in the hands of the umpires.

I can’t quantify how it’ll happen, but there has to be *some* regression with that number.  No hitter can continually get screwed over by umpires game after game, week after week and season after season right?  Assuming that there will in fact be some sort of regression with this, Eloy, like Moncada, will take OFF.  He’s doing okay-ish right now, especially over the last few weeks.  But he’s going to be dominant when he’s seeing 1-0 counts instead of 0-1 count consistently.  Then it’ll be off to the races for him.  I talked on Red Line Radio 2 episodes back about how I loved how we were starting to see a lot of flyouts to RF on outside pitches recently.  His approach was there, his timing was just a hair off.  Well now he’s timing pitches perfectly and working up the middle/opposite field:

And his spray chart is a work of art: 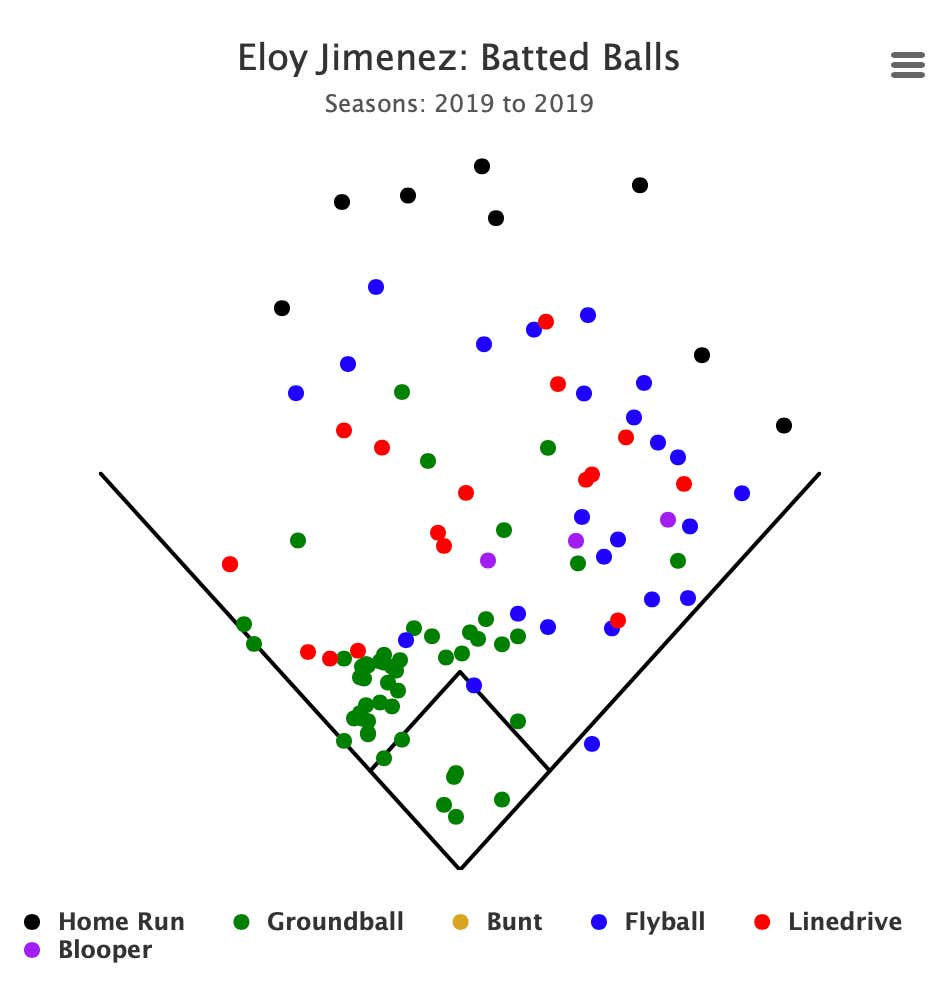 We’re starting to see the Good Eloy with much more frequency.  It’s going to be a LOT of fun to watch him play as a baseball fan the next few years.