Source – A HUNTER managed to fight off an enormous brown bear after biting off its tongue.

The predator ambushed and mauled Nikolay Irgit, 35, in the mountainous Tuva region in southern Siberia, Russia.

Just as it clamped its teeth on his face, Nikolay fought back and called out to his friends for help.

The bear – weighing more than half a ton – fled in terror and Nikolay was able to make a miraculous escape.

He said: “When I saw the bear, at first I froze in horror. I didn’t have any weapons, not even a knife.

“I began to scream, I thought it would not attack. But the bear charged towards me.

“I managed to punch him in the face, but he pounced and knocked me off my feet.”

A police report added: “The bear knocked him down and started biting.

“At the moment when the bear clasped his teeth on Irgit’s face, he managed to bite off a part of bear’s tongue, which is why the bear stopped the attack and fled.” 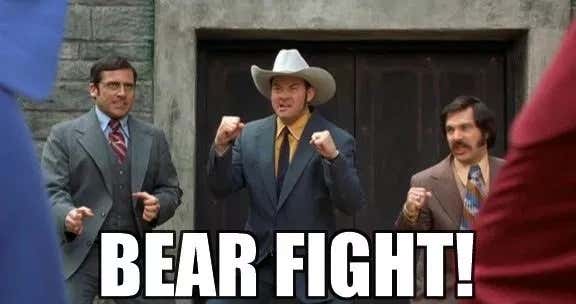 Every once in a while I manage to convince myself I’m secure in my masculinity. Maybe I add some weight on the machines at the gym, lifting a number I haven’t lifted before. Or I take on some DIY project around the house, building or fixing something on my own, without hiring a pro. Hell, my standards are low enough that when I open a jar for the Irish Rose, I’ll flex like Macho Man for a half an hour or so. I’m not too proud to admit it.

But then I hear about a guy like Nikolay Irgit and it’s back to reality for this guy. Nothing will bust your manhood  bubble faster than another man biting the tongue out of a brown bear’s mouth. We’re not just talking about a black bear, like the kind I’ve seen eating trash out of a dumpster behind the hotel I was staying at in New Hampshire. Those things are just Golden Doodles compared to one of these half ton Siberian Murder Wookiees. And this guy fought one off armed with nothing but his teeth, his wits, and his massive, clanging, cast iron testicles.

I shudder to think what it would be like to walk in Nikolay’s reindeer-lined Mukluks for 24 hours. Even the best day of his life. I’m guessing that once I found myself in the mountainous Tuva region of Siberia and found out the nearest Dunkins is, oh, about a 20 hour flight away, I’d pitch myself into the nearest glacial crevasse. I’m just presuming, but I bet he’s never had a day where he couldn’t stop bitching about the pollen all over the deck furniture and what a pain it is to clean it off so he can blog outside. I got bitten on the leg by Glen Ordways’s Pekinese while I was doing his radio show four years ago and I’m still traumatized that it broke skin. And I’m ready to hurl every time I find a dead mouse in the trap in the basement. So if a brown bear so much as caught a whiff of me, I’d probably run into its mouth, praying for a swift, merciful and unmanly death.

So here’s to you, Nikolay. Not since Stalingrad has any Russian proven what tough sons of bitches you are. And to the bear, tough break. But you ever notice how you come across somebody once in a while you shouldn’t have fucked with? That’s Nikolay Irgit.