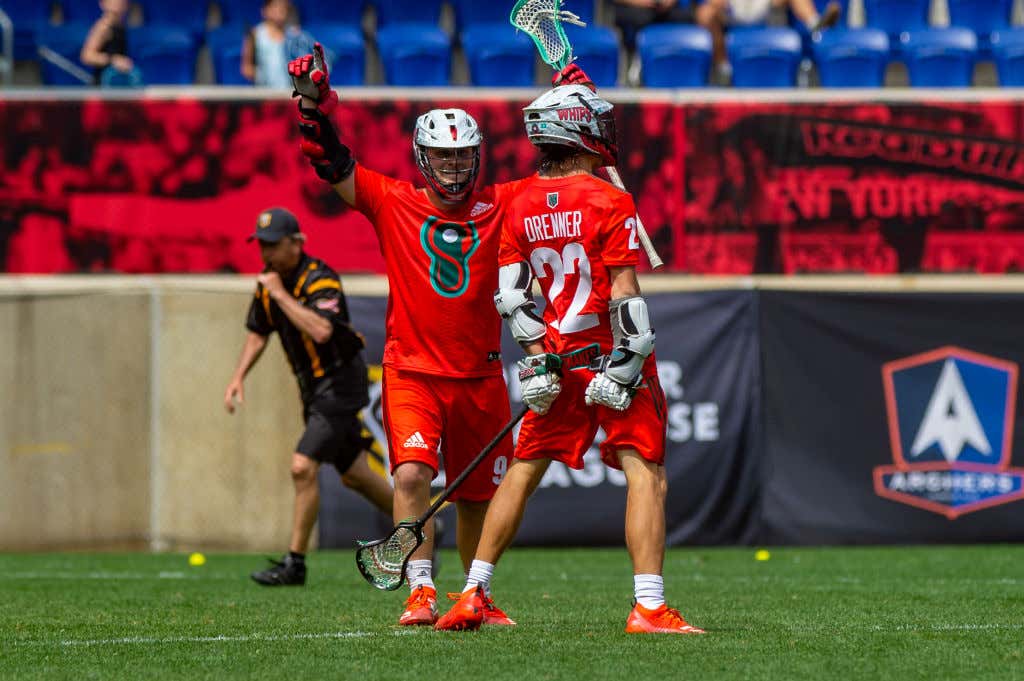 When the PLL announced that their games would be just 48 minutes long, I figured the main reason was because it would be better for TV. You figure a game consisting of four 15-minute quarters along with tv timeouts and a halftime would end up taking forever. Professional lacrosse still has a ways to go before we can start expecting people to tune in to a single game that takes at least 2.5 hours from start to finish. So I figure the four 12-minute quarters was to keep the games fast and keep people interested.

But it turns out the games are just 48 minutes long because there’s a damn good chance that at least 50% of the games this season go to overtime so they’re going to end up being about 60 minutes long anyway. The first two games of the season went to overtime last week at Gillette, and then this weekend at Red Bull Arena it looked like we were in for the same thing.

There are a few different ways to get more people to really start watching and caring about professional lacrosse. The first is with some ridiculously filthy highlights to capture the attention of the standard sports fan. We’ll get to those in a little bit. The second is with gambling to capture the attention of the degenerates. If you listened to Paul Rabil’s interview on PMT, you’ll know that PLL betting is coming in the future. And finally, the third way is with a little bit of fisticuffs and rough stuff to capture the attention of all us simple folk out there who just want to see a bunch of freak athletes beat up on each other. We don’t want to see guys go out there and be best friends on the field. This isn’t the NBA. We want competitors who are ready to beat the piss out of each other if necessary.

Now let me say something real quick–I love the scuffle after this play but it’s also so fucking stupid to be mad at Ryan Drenner for running into John Galloway here. Buddy got pushed from behind and launched directly into the goalie. If anything, it’s the Chrome defender’s fault. Which is typically the case in these types of scenarios. Nothing drives me insane more than when defenders push their opponent into their own goalie. It happens all the time in hockey and we’re starting to see way more of it now in lacrosse too with the crease dive coming back. Going after Drenner for getting launched into the goalie is a bizarre move, but still love to see the boys getting chippy out there nevertheless. Definitely the wrong decision to make for the Chrome though, because Ryan Drenner is a certified weapon and the last thing you want to do is give him a reason to cook your ass on the scoreboard.

Oh and then speaking of making them pay for it on the scoreboard, let’s just fast forward to overtime real quick. Because in OT, it was Ryan Drenner delivering the dagger for the Whipsnakes’ 2nd OT win in a row to start the season.

So yeah, moral of the story here is a two-parter. 1) Defensemen need to grow some brains and stop pushing opposing players directly into their own goalies like a bunch of idiots. And 2) don’t piss off Ryan Drenner unless you want him to dunk all over you for the rest of the game and/or life. Back-to-back OT wins for the Whipsnakes and back-to-back OT losses for the Chrome. This league.

Okay so real quick I want to start off by saying if you don’t think that people care about professional lacrosse teams that don’t have any geographical allegiances, you are dead wrong. Because after suffering a brutal 1-goal defeat on Saturday afternoon, we saw how much Redwoods LC fans care about their team. Like this little dude right here who broke out into tears.

This is just week 2 of the regular season. I can’t even imagine how torn up little man is going to be if the Redwoods lose in the playoffs. That’s passion right there, and this little guy is proving that you don’t need teams to be in specific cities in order for fans to display that level of passion. So the haters can all go kick rocks.

As for the game itself? Well I think it’s safe to say that the Archers is the most fitting name in the league with how many snipers these guys have offensively. Like this dart from Marcus Holman.

But now that I think about it, the Redwoods are also extremely fitting considering John Sexton was operating a lumber yard all day out there. Whether he was sending twigs into orbit like this ridiculous yard sale.

Or if he was just chopping branches in half on the follow-through of his shots.

I guess technically it would make a little more sense to call them the Lumberjacks in this situation. But you get what I’m saying.

Anyway, it looked like we were on pace for yet another overtime game. But when you’ve got assassins like Will Manny out there leading the league in goals through 2 weeks, there’s no such thing as a “worst lead in lacrosse”.

Archers hold on for the regulation win.

This right here was potentially the most important game of lacrosse in the history of the sport. For the first time ever, a regular season professional lacrosse game was aired on broadcast television. Not streamed online. Not ESPNU that you need a specific cable package for. Nope. Just straight up broadcast television for the entire country to watch. And the boys? Well per usual, the boys were absolutely buzzing.

It started off just 8 seconds into the game. Trevor Baptiste aka TB9 wins the faceoff forward, dishes it to Ryan Brown, and then Ryan Brown has one of the sweetest strokes in all of lacrosse so you know you could find this ball in the back of the net.

Now this game yesterday was a huge day for the 2-ball. For instance, we had Matt Rees going bombs away from Steph Curry ranger for this 2-pointer.

But no 2-bomb on the weekend was more impressive than this one right here from Connor Buczek late in the game.

Just a bit of a loose shoulder. No big deal.

But now let’s get on to the nastiest highlights of the weekend. I already wrote a full blog about it and you can read that right here, but I still have to throw in this absurd Connor Fields fake BTB in the recap.

The reason it was so easy to get everybody to bite on the fake BTB is not only because Fields just went behind-the-back a couple of possessions earlier, but also because Miles Thompson was out there scoring goals like this.

Again, this was a saucy saucy goal from Miles Thompson. But it almost doesn’t seem fair that he gets to shoot on a 6’x6′ net in field lacrosse when he routinely scores this same goal on the smaller 4×4 cage in box lacrosse.

And speaking of skills picked up from playing the box game, let’s go right back to Connor Fields for proving to the world that you don’t need to work on your offhand to be a killer out there. As long as you’re creative, you can always get a shot off with your strong hand.

Moving away from the cage. With Callum Robinson all over him. Backhand. Corner pocket. Turn & rake.

If there’s one offense that deserves to be on NBC every single week, it has to be the Chaos. It’s just a highlight mixtape every time they have possession of the ball.

P.S. – Going to nominate myself right now for Best Dressed Media Member of the Weekend.

Sorry for being a patriot.