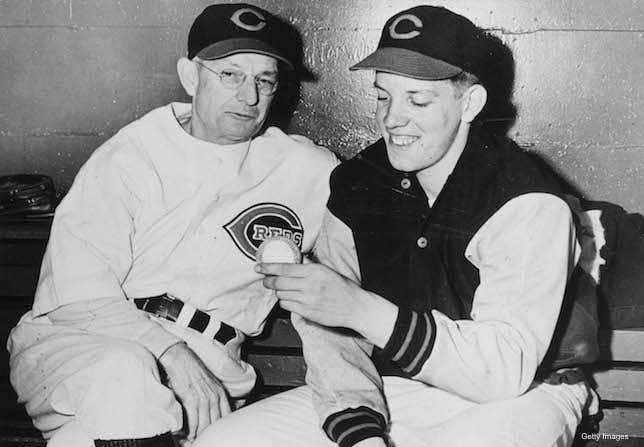 At the age of 15, Joe Nuxhall becomes the youngest player in the history of baseball when he gets a chance to pitch for the Cincinnati Reds. Nuxhall coming in the ninth inning of a blowout loss to the St. Louis Cardinals, shows he is way over his head as he retires just two batters while allowing five earned runs in an 18-0 loss at Crosley Field.

Joe Nuxhall was born on July 30, 1928, in Hamilton, Ohio a suburb 20 miles away from Cincinnati in the southern part of the state. With player shortages still creating a strain due to World War II, teams scoured in all directions to find people to put on the team. The Cincinnati Reds had gone to nearby Hamilton to look at some semipro players. One player that caught their eye was Orville Nuxhall. However, the father of five did not want to leave his children for an extended period of time. While looking at Orville in 1943, the scouts noticed his son Joe was already 6’2” and dominating as a freshman in high school. This led the Reds to offer a contract that was signed in February of 1944.

Originally Joe Nuxhall was to join the Reds after his school year was done, but due to more players leaving for military service, the sophomore got permission to join the team at the start of the season. Nuxhall waited for his chance to play as he traveled with the team as a reserve player. He would wait two months before getting into a game. On June 10, 1944, the Reds at 25-19 were hosting the St. Louis Cardinals who were 29-16 under manager Billy Southworth. The Cardinals who were the dominant team of the era scored in every inning but the third, building a 13-0 lead. Meanwhile, Mort Cooper had limited Cincinnati to five hits. This led Reds manager Bill McKechnie to give a chance for the kid to pitch.

Joe Nuxhall took the mound at the start of the ninth and it was clear he was a boy playing against men. The first batter he faced George Fallon grounded to short. Next up was pitcher Mort Cooper who walked. He then retired Augie Bergamo on a fly ball for the second out. From there it was all downhill for the teenaged hurler. Deb Garms walked and Stan Musial singled to load the bases. Nuxhall was clearly nervous as he walked the next three hitters forcing across three runs. Emil Verban followed with a two-run single chasing the youngster from the game. Joe Nuxhall’s final line was two-thirds of an inning, with two hits, five walks and five runs allowed for an ERA of 67.50. Jake Eisenhart also in his major league debut would get the final out as the Cardinals won the game 18-0.

Realizing just how green, Joe Nuxhall was Cincinnati General Manager Warren Giles assigned him to pitch in the minor leagues. Eisenhart also was demoted and never pitched in the majors again. After finishing the season with the Birmingham Barons of the Southern League, and spending Spring Training with the Reds in 1945, Nuxhall decided to return to high school. Due to the unique circumstances surrounding his debut, he was able to regain his amateur status and was a multi-sport star. After he completed high school, the Reds showed interest in Joe Nuxhall and he returned to the minor leagues.

It would take several seasons, but Nuxhall progressed through the Cincinnati farm system and eventually made it back to the majors in 1952. He would spend the next eight seasons with the Reds, making the All-Star team in 1955 and 1956. After a year with the Kansas City Athletics in 1961, Nuxhall spent part of 1962 with the Los Angeles Angels before returning to the Reds. He would finish his career with Cincinnati in 1966, posting a record of 135-117 in a 15-year career.

After retiring, Joe Nuxhall began working games as an announcer for the Reds, where he would spend 40 years up until his death following the 2007 season. As a tribute, the Reds would place a statue of Nuxhall outside of Great American Ballpark, where his radio signoff “This ol’ left-hander is rounding third and heading for home” is displayed prominently.