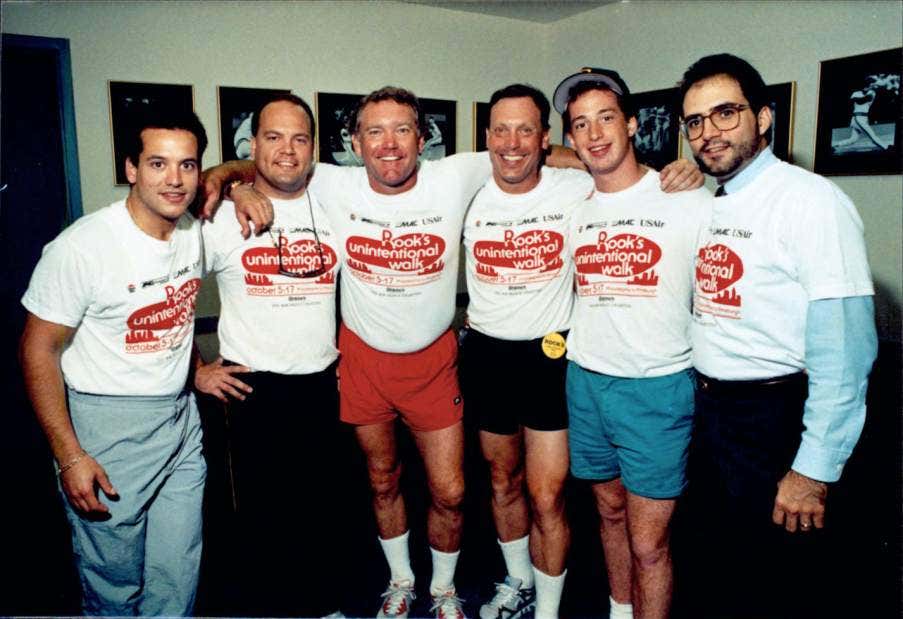 Pittsburgh Pirates announcer pledges himself a walk across the state of Pennsylvania. The Pirates in the midst of a frustrating road trip had jumped out to a 10-0 lead in the first inning against the Philadelphia Phillies at Veterans Stadium. Rooker stated if the Pirates lose, he would walk home, the Phillies would win the game 15-11. Jim Rooker would make good on his pledge in the off-season while raising money for charity.

After four straight losing seasons, the Pittsburgh Pirates appeared to be a team on the rise in 1988, as they posted a record of 85-75 under manager Jim Leyland and challenged the New York Mets most of the summer in the National League East. The Pirates were taking a step backward in 1989, as they were scuffling as June began. Wrapping up a six-game division road trip, the Pirates were on a six-game losing streak as they played the finale of the series in Veterans Stadium against the last-place Philadelphia Phillies.

The Phillies were a team in transition, sitting in last place at 20-34 under Manager Nick Leyva, they were still getting used to life without Mike Schmidt who retired ten days earlier. The disappointing Pirates were not much better, sitting in fifth place at 21-33. After losing to the Cincinnati Reds 4-3 at Three Rivers Stadium, the Pirates began June with a six-game road trip. The opener of the road trip started with a gut punch as they lost to the New York Mets 3-2 on a walk-off home run by Dave Magadan in the 11th inning. The Mets would sweep the series, winning the next two games 9-3 and 4-3. The first of a four-game series with the Phillies had been called with the score tied 3-3 in the eighth inning. In 1989 such games had the game stats count but needed to be replayed in its entirety as part of a doubleheader later in the season. The Phillies, who had an 11-game losing streak would win the next two games 9-4 and 5-7.

Hoping to end their scuffles, the Pirates had Bob Walk on the mound, while the Phillies in the Thursday Night finale had Larry McWilliams on the bump. McWilliams, the night was short as he started the game by walking Barry Bonds. Bonds advanced to second as Jose Lind ground the ball back to the pitcher. It would be the only batter the Phillies hurler retired. Bonds meanwhile scored on a single by Andy Van Slyke. Bobby Bonilla followed with a single, while Gary Redus drove home Van Slyke to make it 2-0, while Redus reached second on the throw home. After Jeff King was intentionally walked to load the bases, Rey Quinones hit a two-run double to make it 4-0. This led to Steve Ontiveros coming to the game in relief of Larry McWilliams. Like the Buccos starter, his night started with a walk of Junior Ortiz. Next up Bob Walk, before throwing his first pitch himself hit a two-run single to make it 6-0 in favor of the Pirates. The onslaught continued as Bonds hit a three-run shot to make it 9-0. Jose Lind who made the first out makes the second out when he grounds the ball to short. Andy Van Slyke meanwhile got his second hit of the inning. Following a walk by Bonilla, he would score on a single by Redus. King was walked again to load the bases. This time the inning would end as Quinones grounded out to third to end the ten-run inning.

As Bob Walk prepared to pitch, KDKA announcer Jim Rooker had another walk on his mind, boasting he would walk back to Pittsburgh if the Pirates lost the game after taking a 10-0 lead in the first inning. Randy Ready was well ready to bring the Phillies comeback, with a leadoff double. He would score on a two-run home run by Von Hayes. As Ontoveros settled things down for Philadelphia, retiring the Pirates in order in the second and third, Hayes again hit a two-run shot to make it 10-4, following up a walk to Steve Jeltz. While Walk struggled with his control, the Phillies continued to chip away in the fourth, as he issued a two-out walk to Randy Ready. One batter later, Steve Jeltz homered to make it 10-6, leading Jim Leyland to call upon his struggling bullpen. Bob Kipper ended the inning getting a fly out by Von Hayes.

In the fifth inning, Jose Lind who made two outs in the first, singled with two outs, late scoring on a double by Andy Van Slyke, who was thrown out trying to stretch it into a triple. Leading 11-6, Kipper had no issues in the fifth. However, in the sixth inning, the Phillies continued to draw closer as Darren Daulton and Randy Ready walked with Steve Jeltz following up with a three-run bomb to suddenly make Rooker and the rest of the Pirates faithful begin to sweat. After a strikeout of Von Hayes, John Kruk doubled to send Kipper to the showers. Reliever Bill Landrum was not doing much better as Juan Samuel reached on an infield single, while Kruk scored on a hit by Ricky Jordan to make it a one-run game. Dickie Thon would strikeout ending further damage in the sixth.

After the Pirates tried to spark a two-out rally, Don Carmen came on in relief to keep the score 11-10 as he got a flyout from Jose Lind. Landrum worked through the seventh while Carmen set down Pittsburgh in the eighth. Looking to hang on, the Pirates had Jeff Robinson on the mound in the eighth inning, after a ground out by Von Hayes, the Phillies began another rally with a single by Kruk. Juan Samuel and pinch hitter Bob Denier were walked to load the bases. Robinson’s erratic control continued as John Kruk tied the game when he scored on a wild pitch. To reload the bases on setting up a double play, Dickie Thon was intentionally walked as Roger Samuels came in relief for Pittsburgh. With all momentum on the side of the Phillies, Daulton laced a two-run single to take a 13-11 lead. Curt Ford followed with a triple that was misplayed by Barry Bonds. Ford attempted to complete an inside the park home run but was out going home.

Leading 15-11, the Phillies called on closer Steve Bedrosian to complete the surreal comeback. He got strikeout of Benny Distefano to start the inning. Following a single by Rey Quinones, Bedrosian was solid as his nickname bedrock, fanning R.J. Reynolds, while John Cangelosi flew to Kruk in left to end the game. Steve Jeltz who was key to the Phillies comeback with two home runs and five RBI, only had five career dingers and had not hit a home run for five years entering the game. 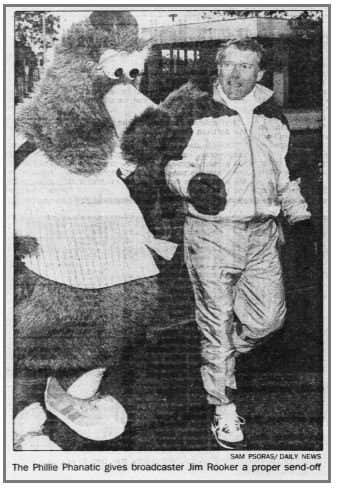 Jim Rooker, a member of the Pirates 1979 World Championship team who later became a broadcaster in 1981 would make good on his pledge to walk home. Returning to Philadelphia following the season, Rooker began 300-mile journey on October 5th. It would take 12 days for Jim Rooker to complete the trip, as he used the walk to raise money for charity.