CHICAGO —  A masked man is smearing poop on Bridgeport homes and cars — and sometimes hiding it under car door handles so the victims can’t see it. It’s happened a least a dozen times in recent weeks, with one person even catching the vandal on video as he rubbed poop — either human or dog; no one’s sure — on her car late in May.

Tony Wu, 21, of Bridgeport, said he almost fell for the foul trick last week: He went to his car and was about to open the door when he spotted feces under the handle.

It turns out there have been about 15 such incidents in the neighborhood over the last month and a half.  The culprit hits early in the morning, wandering the neighborhood 3-5 a.m. with a duffel bag “full of paper towels and what I assume to be dog feces or maybe his own; I’m not sure,” Wu said.

“There’s no way he just has feces laying around to smear on people’s cars,” Wu said. “He has to be collecting it somehow.”

Back in college we used to do poo dollar outside of Kam’s during happy hour. It’s not rocket science. Someone would drop some shit on a dollar, leave it on Daniel Street and then we’d all huddle up by the bay window over by the cig machine pictured here: 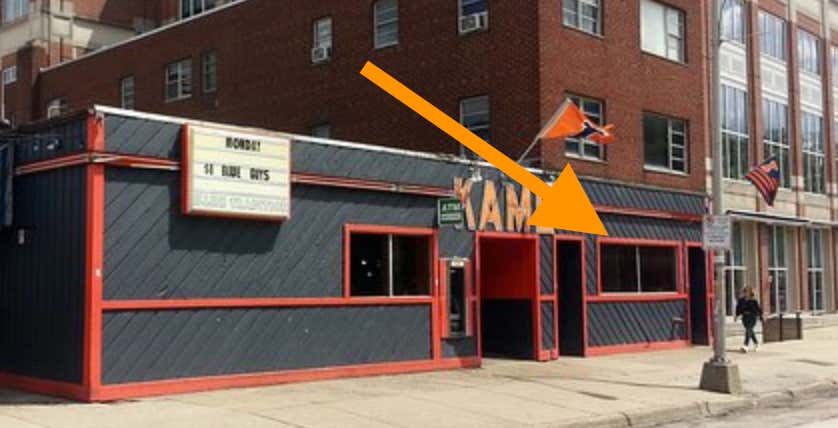 We’d put the dollar literally right outside that window and then as soon as someone touched it you’d see a dozen guys going absolutely fucking bananas from inside the bar.

We were super cool dudes.

But then we grew up and the opportunities to rub shit on other unsuspecting people started to fade away. Every now and then I’d get the urge in my first cubical job to Poo Dollar the sales guys but I was like No Carl Don’t Get Fired so I didn’t.

There’s a lot in the post-college transition period that people don’t talk about. I have the Courage to address PDW (Poo Dollar Withdrawal) because I’ve experienced it firsthand. It’s obvious this guy is making a clear cry for help:

Law Enforcement has failed to identify the perpetrator so let me help everyone out on the character description. He’s 33-38 years old. He had a lackluster 4 years at De La Salle in the late 90’s/early 2000’s. After 2 semesters (really just that one) at Eastern, he enrolled at the Community College outside of Iowa. I think it’s called Kirkwood. He never made a tuition payment or went to class but somehow ended up in the student directory for a few months in 2006. His facebook says he goes to Iowa but hasn’t been in the state since that one speeding ticket. Apparently you can get serious jail time if you’re 51+ mph over the speed limit. His dad found out when the insurance premium went up 35%. He paid his dad back for the legal charges by spending the summer working on his his Aunt Beverly’s hot dog cart at 36th and Union. She died shortly after – some say because of the stress of managing her nephew’s haphazard approach to time management and dicing the onion.