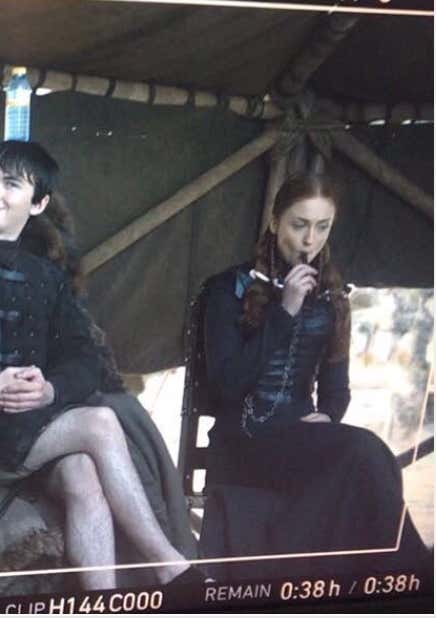 On Tuesday night, the cast of the new movie X-Men: Dark Phoenix stopped by Jimmy Kimmel Live!, where they discussed some major spoilers about the film, including (alert!) Mystique’s death.

First of all, I couldn’t believe how horrible that spoiler alert was.  I mean the “alert” was literally one space away from the spoiler, so it is physically humanly impossible to not read the spoiler as you’re seeing the alert. 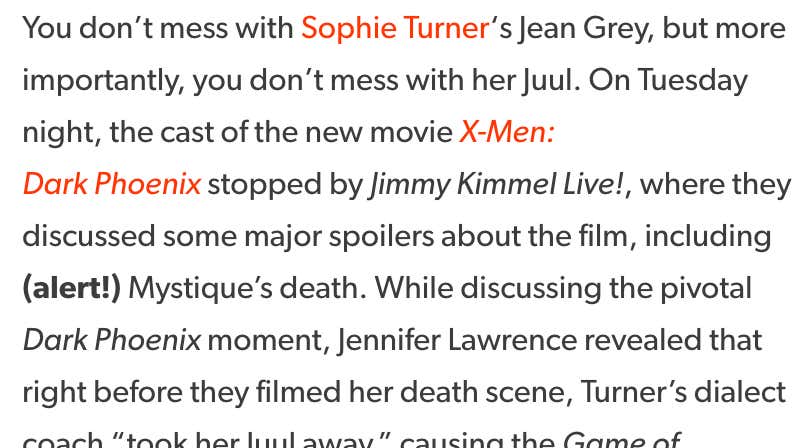 But Hubbs told me that it’s not really a secret and you can tell easily from the trailer, so whatever.  I’m not an XMen guy so I don’t personally care, I was more upset with the principle of it.  I’m just concerned that this woman has such clear disregard for the rules of a polite society that she probably did the same thing for Avengers and Sixth Sense and Usual Suspects.

If you’re wondering how actors and actresses make themselves cry on demand, over and over, take after take, here’s how Sophie Turner does it:

The crew takes away her Juul.

While discussing the pivotal Dark Phoenix moment, Jennifer Lawrence revealed that right before they filmed her death scene, Turner’s dialect coach “took her Juul away,” causing the Game of Thrones alum to cry right as the cameras rolled.

And we’re not talking like, get some little drops to roll out.  We’re talking so much crying and so many tears that A-list actress Jennifer Lawrence cried watching it happen because it was “so raw” and “the performance of the year.”

“It was so honest and real,” said Lawrence. “It was like the performance of the year.”

…Lawrence explained that she did cry, but not over her own death. “I teared up a little bit watching Sophie in that scene,” she said. “Her reaction to my death was so raw.”

“It was so honest and real, and it’s because she really was crying,” continued Lawrence. “Because her dialect coach, right before the take, took her Juul away.”

Nicotine – ever heard of it?  Kind of addicting.  You’d cry too if someone cut off your life source.  And my girl Sophie Juuls nonnnnnnnnstop.

It’s no secret that Turner loves her Juul: shortly after Game of Thrones aired its series finale, the actress shared a behind-the-scenes photo of Sansa hitting her vape.

Gotta do whatever works, especially when you’re making Dark Phoenix money.  That acting better be airtight.  Daniel Day-Lewis lives in a wheelchair and goes to jail and doesn’t bathe, Sophie Turner has her speech coach take her electronic cigarette for 16 year olds away for 5 minutes.

“So that’s where you get your motivation? From your Juul cigarette?” asked Kimmel (god, who knew he was so lame). “It is, yup,” said Turner, explaining that her dialect coach knew how to get the best performance out of her. “That’s how to act. You take it away, and then you give it back. And that’s happy and sad,” said the Dark Phoenix star.