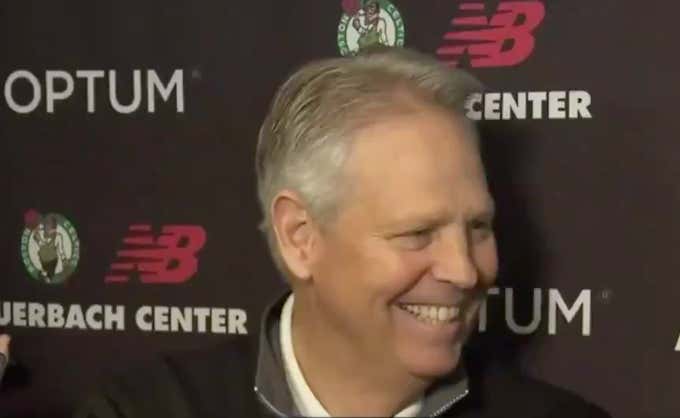 Today was the first time we’ve publicly heard from Danny Ainge since his heart attack, and with the Draft and free agency rumors swirling I can’t think of a better time. As always whenever Ainge goes in front of the media like this or on the radio you usually have to read in between the lines. He’s crafty and chooses his words carefully, you’ll never get the sort of answer that fully shows his hand, and there’s always that level of classic Ainge spinzone bullshit that you have to consider. Thankfully it’s my life’s work to decode that exact thing so let’s have a look at what he said today.

First and foremost, this is the big one. After his second health scare you obviously have to be concerned that this job may be physically killing him, and everyone knows the key to a successful organization is stability at the top. Hearing that nothing is changing in regards to Ainge’s role in building this team moving forward was a relief to hear. Listen there are people who debate how successful he’s been during his tenure all the time but the facts are you could do a whole lot worse than Danny Ainge.

I mean what a line. This is that Ainge charm that butters me up every single time. Seriously though maybe he should hit up Bill Walton and get a nice relaxing strain to help with his stress.

The Al Horford situation is important for a number of reasons. First, he could straight up leave and while that would open up a shit ton of money, it would kind of bone the team in terms of their talent. I think everyone is hoping he opts out only to then sign a more team friendly deal that gives him more overall money for more years but at a lower number than his $30M so they can have a little more room to add in additional role players. In my opinion he’s either opting in for the full thing or restructuring because I can’t imagine he’s going to get that price on the open market given his age. It sounds like Ainge and his team have a plan, and that’s reassuring.

OK, this is the big one. This is the million dollar question given every single day there is a new report about Kyrie being 100% gone. I’m not kidding either. Yesterday we had Stephen A say he was pretty much a Net, and then today we have even more reports

Well you heard the man. Kyrie and his camp have given Ainge no indication that he’s not coming back. Here’s where the classic Ainge bullshit needs to be considered. There’s no chance he was going to come out and say that Kyrie already told him he was leaving, but saying there are ongoing conversations tells me that he probably has the best idea of what Kyrie is going to do. Not Stephen A. It also tells me that Ainge is working on Plan B, C, D, E since he’s been in contact with Kyrie.

No chance Ainge believes this. Not in a sense that there weren’t other guys that sucked balls, there surely was. But that’s just the way it goes when you’re the best player and you talk all year about how nobody needs to worry since they have you for the playoffs and then you have the worst 4 game stretch of your entire career to get eliminated in the second round. He absolutely deserves the most blame, but not all the blame so I feel like this was Ainge once again sort of washing Kyrie’s balls a little bit. It’s called damage control people read a book.

The other hot topic when it comes to Kyrie is if the Celtics won or lost the Kyrie trade. For me, that all depends on what happens over the next month. There are two different arguments when it comes to this that I feel like people get confused on. It’s possible to think that the trade was 100% something Ainge had to do and that he was right for doing it, but it’s also fair to say that if Kyrie leaves what you got in return for that deal did not meet your expectations and in that instance it failed. Even if you think what Ainge gave up was mostly trash, getting nothing from the Kyrie trade is not ideal.

Why this is interesting is we are in a similar situation with Anthony Davis. There’s the same amount of risk with him, and the way Ainge answered that question tells me he ain’t no bitch and is not scared to bring in Davis if he thinks that truly makes his team better.

You and me both Danny. Really Gordon Hayward’s health is the key to everything in a potential post Kyrie world. If he looks more like he did this postseason, that’s a big time problem. If he looks more like the UTA version after a full summer of healthy training, well suddenly the entire look of this team is drastically different. There’s no denying he disappeared big time in that MIL series, it was a major problem and a huge factor in why they got bounced early, but there’s also this

Everyone had a rough year last year, and few worse than Brad. It’s OK to admit that our Boy Wonder had some issues. Whether it was rotations, knowing when to call timeouts, having his team motivated, not knowing how to handle star egos, it was mostly a disaster. But if there’s one thing the Celts have been consistent with it’s their dedication to Brad Stevens. Wyc went on the radio and said it, Ainge said it here. This is basically the exact opposite of what’s going on in Houston. If you are one of the morons that want Brad Stevens fired, well you’re goign to be disappointed.

I’m pretty sure Danny loves Terry more than his old children, but there’s no way he was OK with what Terry did when he went all scorched earth on ESPN. Does that mean he’s going to match whatever offer Terry gets? That’s technically not what he said. He said if Terry was in the right role he would do great, but that role might never exist.

This may have been my favorite part of the whole thing. We got every classic Danny Ainge line in the book about how they’re going to have “discussions” and are exploring every “scenario” and all that bullshit. Then it’ll come time for the Draft, they won’t do anything, and we’ll get the vintage spinzone about how it takes two teams to make a deal, and they were close on a bunch of stuff but couldn’t get over the finish line etc. It’s my favorite yearly Celtics tradition.

As long as they snag my dude Lu Dort I don’t really give a shit what they do.

Obviously it was great to see Ainge looking good and healthy after his scare, and sadly I don’t think his quotes about Kyrie will get as much buzz as his Nets rumors are because that’s just the way ESPN and others work. I sit here after watching all that and don’t really feel all that different about everything and honestly I didn’t expect to. But I think there are some big takeaways like his willingness to take risks given the summer we’re about to have. Now we wait and see what he actually does, because honestly NOBODY has any fucking clue.