More on this in a hot second. For now, some stuff on the club.

Call this is a double bagger where I recap notable notables from the last two games with some draft analysis at the end. Let’s not waste any time.

Lester’s Last Start: No one on Earth is better suited for pitching at home after getting swept by your division rival than Jon Lester. And making matters better was Lester’s last start out – a bad loss to Houston after holding a 3-1 lead into the 5th inning. The Cubs lost and I said next time out he’s going to be Aces because he’s that salty of a competitor.

Fortunately, the Angels were coming off 4 games in Seattle meaning they had to travel Sunday night 4.5 hours cross country into the time zone and play a day game at Wrigley. Fuck that.

Same time, ripe conditions for Lester to throw a gem:

It’s Lester at his best. Facing a bunch of hitters he rarely sees, spinning 88mph cutters across every edge of the strike zone. It’s immensely satisfying. Almost so that I’d rather watch Jon Lester craft his way around 7-innings of 1-run baseball than Justin Verlander gas 15 Toronto Blue Jays.

Welcome CarGo: He’s 2-6 with 2 runs in 2 games since getting signed to a minor league deal last week. He was instantly promoted to the big league roster and instantly made an impact defensively Monday:

At one point yesterday the Cubs had CarGo in left, Almora in center and Heyward in right with Baez/Russell up the middle. That’s about as good of a defense as you’re going to find in the National League. And as I said last night – I think we can all agree we thought CarGo would look sweet in a Cubs uniform. We just didn’t know it would be this sweet 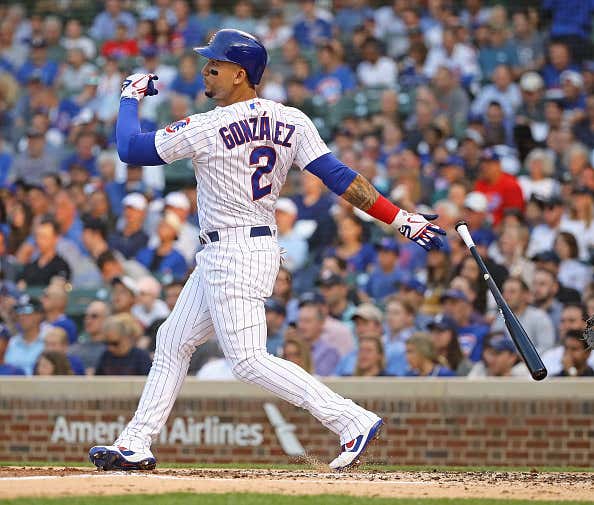 Trevor Cahill was in town for the Angels. Reminder: he gets a beef for the 2016 World Series every time he wants one.

That was his 14th long ball and this is his 15th

What remains to be said about Javy Baez?

Clearly, he’s the #1 player in MLB other fans want on their team and #2 is probably also Javy Baez. Idk if there’s a #3.

When you have that pitch, you can throw pretty much whatever else you want and it’s going to look like a plus-plus whatever. Hitters are terrified of that kind of changeup because it makes them look so uncomfortably stupid.

So with all that said, no one paying attention was surprised with Kyle Hendricks putting up yet another quality start (6 of last 7). Only thing that had me coughing was the 10 strikeouts. That’s a direct reflection of the filth behind his changeup and it appears that right now it’s quite filthy. That’s 26 k’s in his last 21 innings. Average MLB starter is going to be about 8.9 K’s/9 so chew on that.

Offense Generally – I love seeing 14 runs after getting swept in St. Louis. I love that the Cubs scored 8 on Monday after a brutal 16 game stretch in 17 days. They should have had Monday off but rain in April forced the Angels to get moved to the Draft Day. Nothing the players can do about it but that doesn’t stop it from being total bullshit anyways. So, I’m delighted they came out and slapped the Angels all over the field and never really made it a game.

My first blog on Barstool was covering the Cubs 2013 draft when they took Kris Bryant. It was a big day for me for a lot of reasons and hysterical to think about in hindsight.

Fast forward 7 seasons and the Cubs are drafting much later in the 1st round. This time it’s an electric and undersized right handed pitcher from Fresno State that has what scouts are saying limited pitchability. He doesn’t throw a very good changeup, doesn’t rely on command, etc. But he gasses 98 in the 8th inning of his starts and for that reason you know he’s a top arm. But the lack of pitchability has him rated 99th overall and most people scratching their heads why the Cubs got him at 27th.

Some details on his stuff here:

My hunch is they see him immediately as a reliever with two plus pitches and they don’t want to waste 3 years of his development trying to teach him fastball command and a changeup. Instead let him focus on his nasty breaking ball and pumping 97+ fastballs. That will get him into the backend of the Cubs bullpen much faster which is where he ends up if they try to start him anyways. So fuck it and just let him be a big slider guy and get some strikeouts in the late innings. Would be a nice change up pace.