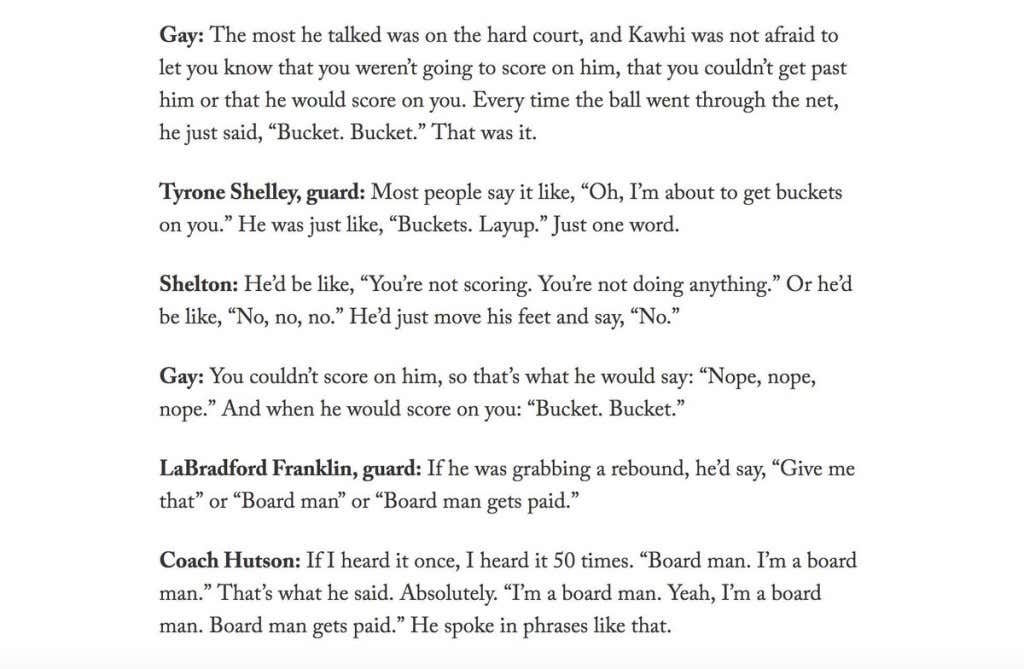 That snippet is from this really awesome story about Kawhi Leonard during his time at San Diego State which you can read here. Now throughout NBA history we’ve been blessed with some of the best trash talkers you’ll ever see. There was Gary Payton, Larry Bird, Kevin Garnett, Michael Jordan, Reggie Miller, Joel Embiid, Rasheed Wallace, Draymond Green, Kobe, Drake, Russell Westbrook, the list goes on and on. And while it feels weird to say, I think we have to put Kawhi Leonard extremely high on that list.

In my mind, there are two different type of trash talkers. There’s the Gary Payton and Kevin Garnetts of the world that will berate you, be loud about it and eventually mentally break you. They may even tell you how your wife tastes like Honey Nut Cheerios for example. This is for sure a successful approach if you’re looking to get a guy off his game. But then there’s the other kind, the silent assassin. This is a dude who isn’t going to be all that loud with his trash talk, what he says will be subtle but you bet your ass it’s going to drive you crazy and be just as effective. To me that’s the category Kawhi falls into and hearing that story about some of the shit he would say back in the day is so perfect.

It have been maddening to be getting clamped by Kawhi and all he keeps saying is “nope”. Doesn’t matter what you try he’s just tossing a “nope” in your face while locking you down. Brutal. Then on the offensive end there’s just something so perfectly disrespectful about only saying “bucket” or keeping things to one word after every time he scores on you. That’s some Kobe/MJ type shit. The “board man gets paid” line? Awesome and not false as he is about to get big time paid this summer.

No shit nobody talks shit to him because they don’t want to be on the receiving end of his trash talk. Pretty smart if you ask me.