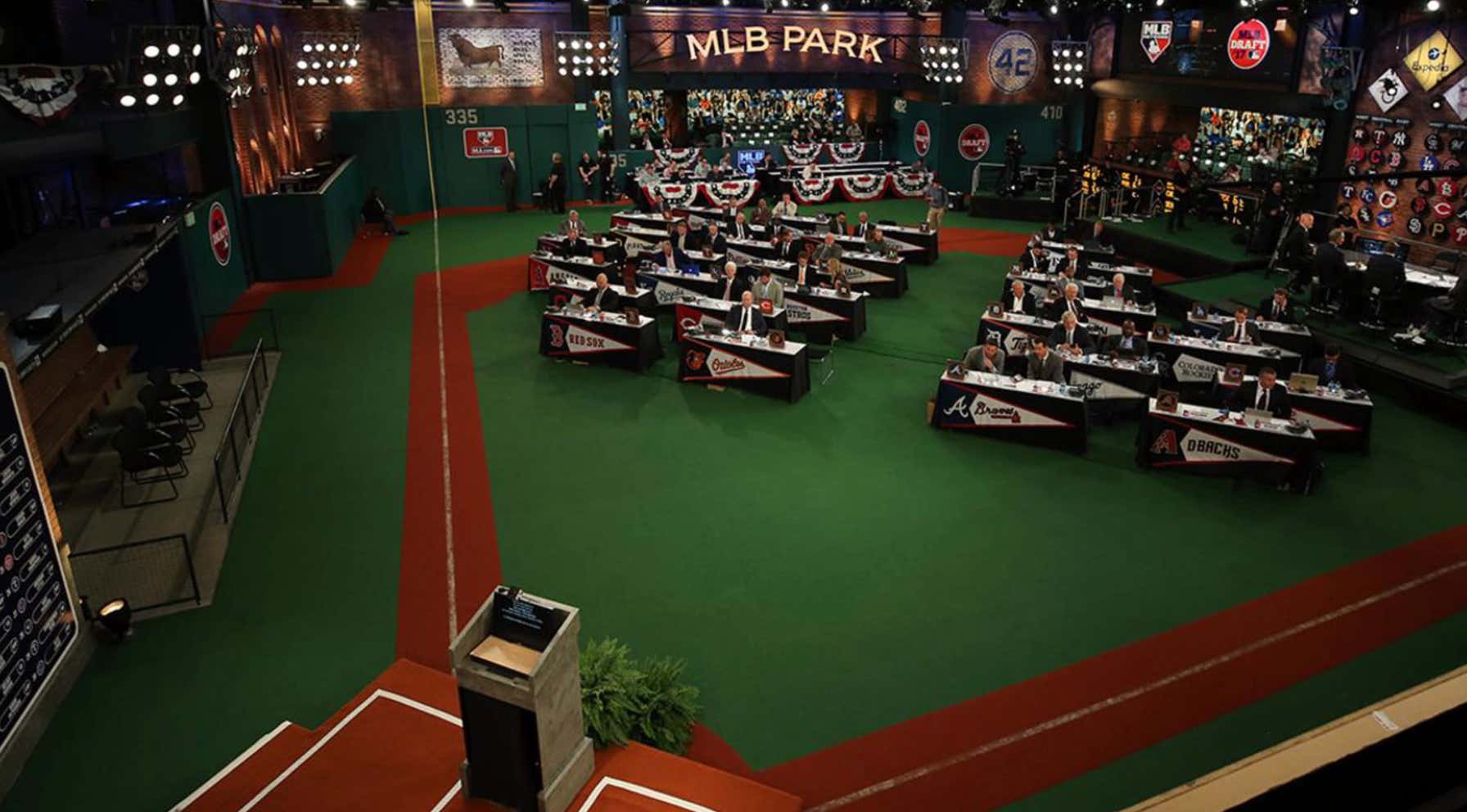 This is one of my very favorite days on the entire MLB calendar.  I broke down the top players a few weeks back, and now I’ll give my mock draft top 5, as there have been some new rumblings about who’s going to go 1-1, some players rising, and some falling.  Nevertheless, there will be all stars in the 1st round and busts, and some local kids drafted:

But for now, here’s my mock top 5.  I’m copying my write ups on the players from the last blow but adding more info below:

He’s the one player in this draft that I would label “future superstar”.  Switch hitting, athletic catchers who pair great contact skills with great power don’t come around hardly ever.   By all accounts he’s a great defender as well.  Right now he’s the odds on favorite to go 1-1, though a little birdie tells me that might not be the case as of the last few weeks.  The Orioles have the 1st pick and have the worst big league roster on earth, a dog shit Latin American scouting infrastructure and a pretty mediocre farm system to boot.  He should fly through any system and might not fall in line with Baltimore’s timetable for when they’re going to be competitive again.

If he got full slot at 1-1, that’d would be about 70% of Baltimore’s total bonus pool.  They could very well take him as he’s absolutely the best player in the draft, or the O’s could select someone like Bobby Witt Jr., a HS SS with ++ tools across the board for around $8MM, or go with someone like CF Hunter Bishop of ASU of JJ Bleday of Vandy for WAY less at like $6MM.  This allows them to load up on organizational depth in proceeding rounds, which they are in dire need of, and maybe overpay for a HS kid in round 2 or a comp round that’s deemed a “tough sign” because of a hard college commitment.  They’re also gunning for the 1st pick in the 2020 draft as well, so they might actually opt for this strategy.  As a White Sox fan, I hope to god they choose the latter strategy.

The 1st overall pick doesn’t have a lot of leverage.  His slot value is about $8.4MM but the Orioles could theoretically offer him $7.8MM, the value of the 1-2 slot, and Rutschman would have a hard time saying no to that.  That is unless a team like the White Sox told him they’d pay him over slot at like $9MM which could very well be what he’s looking for and what the White Sox want to give him.

Apparently the Royals LOVE Bobby Witt, Jr.  Witt is the son of Bobby Witt (shocker) who was the 3rd overall pick in the 1985 draft and racked up 142 career wins on the mound for the Texas Rangers, among others.  This kid is a stuuuuuuuddddd.  He’s has the perfect frame for a 17-18 year old kid that you want to get into your organization, introduce him to a professional weight and nutrition regimen, and let him blossom into someone like… Carlos Correa.  He’s an OU commit, but there’s not a shot in hell he signs with them as he’s could very well go 1-1 and will drop no farther than 1-5.  As a HS kid, he definitely fits the Orioles timeline more as he’ll need bare minimum 3-4 years to fill out and more likely around 4-5.  With Rutschman seemingly ready as early as 2020 (probably 2021) the Oriole’s will be forced to start his clock way earlier than they’d need to with Witt, Jr.  That and Witt, Jr. will probably take a slot value deal and as I said before Rutschman probably will command more than slot value.  The rub here as a Sox fan is that if Witt goes 1-1, I don’t see KC passing on Rutschman.  So we have to pray that someone like Andrew Vaughan of Cal or the aforementioned JJ Bleday of ASU goes 1-1.

He’s been said to be the best “pure hitter”  in this draft classand was the 2018 Golden Spikes winner (equivalent as the Heisman Trophy) but I’ll be honest, I’m not COMPLETELY sold on him.  He didn’t perform crazy good with wood in the Cape Cod league last summer and that can often be a better barometer of a player’s future performance than raking with a 33-30 Demarini.  That said, I do love his swing..

Very contact oriented with a slight upper cut.  Kinda reminds me of Jake Burgers, as in he won’t hit 500 foot moon shots but will square a ton of balls and use his hips/leg drive to pound balls 110MPH over the fence.

Vaughan is another player that could theoretically go 1-1 as he could be a much cheaper sign than Rutschman or even Witt.  That said, college 1B historically underperform once drafted.  There aren’t many that have gone top 3, let alone gone top 3 and dominated.  He’s a 1B/DH profile and the Sox are loaded with similar players in their system. But he’s a “safe” pick as he’s got a really high floor at the very least.  Assuming Baltimore and KC go the safe routes and take  Rutschman and Witt 1-1 and 1-2, the Sox could very well go Vaughan at 3-3 and see him in Chicago as early as 2021.

CJ Abrams, SS out of a GA HS.  Now this would be a complete and total boom or bust pick.  In my opinion, Abrams is the kind of player you look to sign out of Latin America as a 16 year old for like $300K.  He’s long, wiry, can put on a LOT of “good” weight, can absolutely fly and has great defensive tools to have a shot at sticking at SS.  Kid can fly, but I fucking hate his swing.  He doesn’t engage his hips or legs at all and just kind of waves at the ball.  Whoever takes Abrams has a lot of work to do with him.  He might make decent contact, but it’ll be weak contact.  I don’t see any power potential at all in his swing and the Sox need a superstar at 3 this year, as it’s the last year they will be picking this high for a long time, assuming they don’t get pummeled with more injuries this year.

I asked a scout last night what he thought of Abrams:

Now it’s obviously just one man’s opinion but I don’t want Dee Gordon at 3.  I want someone who can be molded into a superstar.  Not to say that Abrams can’t, but there are other players that won’t take as much work that should command about the same bonus at 3.  That said he fits the Marlins mold and timeline, so he can work here.

This is the perfect HS baseball frame.  It’s long, wiry, and very athletic.  This kid will be about 6’2-3″, 210 pounds when it’s all said and done.  I love love love his swing.  He’s going to be a kid with legit 30 home run potential from the left side.  His hands are fucking lightning fast.  In terms of raw offensive tools, this kid might have the best offensive potential in the entire draft.

And there’s your top 5.  Unfortunately, nothing crazy happened.  BUT – and I repeat but – I know for a stone cold, 100% fact that they Orioles have asked a lot of players what they’d take at 1-1.  “They’re figuring out if they wanna make players race to take the least money” or not is what I was told.  Good – do it.  One of those players is…

Either him or Rutchman will win the Golden Spikes award this year.  He’s put on a goddamn show for Vandy:

Scouts wanted to “see more power”.  Oh okay, he just went out and lead the entire nation with 26 this year.  He was figured to go anywhere from 7-10 or so, so he’s looking at bonus of around $4.4-5.3MM.  Again, Baltimore could theoretically offer him $6MM and load up on depth.  He wouldn’t be a bad consolation prize for them and should fly through their shitty system.

But… I just don’t see the Baltimore Orioles surpassing on what could be a generationally good catcher for depth.  That sucks, but it’s just my hunch.  Now obviously it’s possible as we’ve all heard there are rumblings that they might, but in the end they’ll take BPA.  That leaves the Sox with Vaughan, who should see Chicago as early as 2020.  That said, *if* and I repeat *if* Rutschman falls to them, the Sox rebuild is kicked into hyperdrive as they’ll now how all the more depth to trade from with Collins now being available.  It’s time for us all to get on our hands and knees and pray that happens.