Author’s Note: This is a retelling of an article I wrote in the old paper edition of Barstool back on May 31, 2008. I wrote it then because it was the five year anniversary of the day I’m about to describe. I didn’t know it at the time, but the family involved had no idea this had happened, because no one could really explain it. Including me. It wasn’t until the paper came out that our mutual friends gave them the article as a way of of telling them. So with today the 16th anniversary it seems as good a time as any to post it on the blog. I swear that this happened just like I remember it. None of this is embellished in any way.

Synchronicity – The term created by Swiss psychiatrist Carl Jung to describe the coincidental occurrence of events, and especially psychic events, that seem related but are not explained by conventional mechanisms of causality.

“Not everything is in your books, Stephen.” – Capt. Jack Aubrey, “Master and Commander”

As I’ve mentioned before, I grew up in Weymouth, MA, and still live in the area. And I consider one of the great blessings in my life that I’m still friends with the same group of guys I went to school with. Some of them since before we were in 1st grade. I watched that 18-inning, 7 1/2 hour World Series game last October with the same group of guys from the same bar where we watched the Sox lose Game 7 to the Mets in 1986. And for the most part, having the same stupid conversations we did then. To me, there’s something profound in that, and it’s one of the things I’m most grateful for – in a life filled with things to be grateful for – is keeping lifelong friendships.

But not all those relationships lasted. Tragically. One guy who wasn’t there was the guy we called “Killa,” who died in a single car crash back when we were in college. No one knows exactly what happened. But it was easy to rule out any kind of a substance because he didn’t drink. At all. Our best guess is that it was during finals when he was at Stonehill, and he might have been exhausted from being up all night cramming for tests. It’s all we’ve got.

We called him Killa, both because it was a play on his last name but also because it was kind of ironic. He was one of the last guys you’d ever call that. He wasn’t shy or timid by any means. He didn’t drink not because he was anti-social but because he had a long time girlfriend and hung out with her most weekend nights when the rest of us degenerates were out looking for a house party. I remember him asking what those parties were like because he’d never been to one. But he was social and funny and a good athlete and had as many friends as anyone. In other words, he was a typical Weymouth kid. He wasn’t naive, but I think “guileless” is a pretty good word to describe him.

When someone you know dies, it’s sort of human nature to overstate your relationship, say you were best friends and soulmates and act like you were the departed’s dying thought. I’m definitely not saying that about Killa. In the complicated Venn Diagram of a teenager’s social life, we were in some overlapping circles for sure. But we went to different elementary schools so we had more fully-formed friendships by the time we met in middle school. We were more like secondary friends; with buddies in common we were each closer to. Like I’m not sure we ever called one another directly. But we played regular pickup basketball games when the high school gym was open a couple of nights a week and he’d give me a lift home. We had classes together and sat at the same table at lunch and study hall. And I can say with all honesty I never didn’t enjoy being in Killa’s company.

So jump cut a lot of years, as these stories so often do, to 2003. Someone among my Weymouth buddies made arrangements with the Red Sox to rent out Fenway for a game on May 31st. With the proceeds all going to Red Sox charities. We had the entire ballpark to ourselves, minus the odd tour groups going through. Family and friends were invited. Uniforms and equipment were purchased. A party was planned for after. Needless to say, it was every aging jock’s dream come true.

The fellas came to me and said I wasn’t not welcome to play. But they had another option if I was interested: To be the PA announcer. It was a tough call. To be one of two dozen guys on the field or the one up in the booth, having complete control of the mic I’ve been listening to since the Sherm Feller days, with the chance to go full Harry Doyle on everyone I grew up with. As much as I love swinging for the Green Monster, I love the sound of my own voice more. So I took my 7-year-old up in the booth and called the game. It was magical.

As was the game. Which, to a large extent, was a memorial to Killa. His dad threw out the ceremonial first pitch. The first batter of the game was arguably his best friend Brink, who took a called strike holding the bat Killa received for being the MVP of the Little League All Star Game. It was genuine and heartfelt and just the beginning of a day no one who was there will ever forget.

It was after the game that things got surreal.

The after party was at a place in Fenway that is now Game On, but at that time was called The Players Club. We had the downstairs area all to ourselves, our wives and kids, pounding beers, eating ballpark food and busting balls. Mr. Killa was there. But now, in his 80s, it had been a long day for him and he was saying his goodbyes.

Before he left, someone asked him to take a group picture with all of us, and he obliged. We were looking for a place to take it with such a big group and a crowded place. One guy suggested in front of the obligatory wall painted like the Green Monster, but our friend Jake said “No, there’s people over there eating. Let’s try over here” and led us to a vacant spot. Everybody lined up, Killa’s dad in the middle. Arms around each other. Smiles. Clicks. Thanks for coming, see you soon.

Not a minute later, Jake looked at the wall behind us and said “I have this same exact picture framed on the wall in my house. I cut it out of The Globe. … ” It was a big, wall-sized blow up of a Dwight Evans at bat: 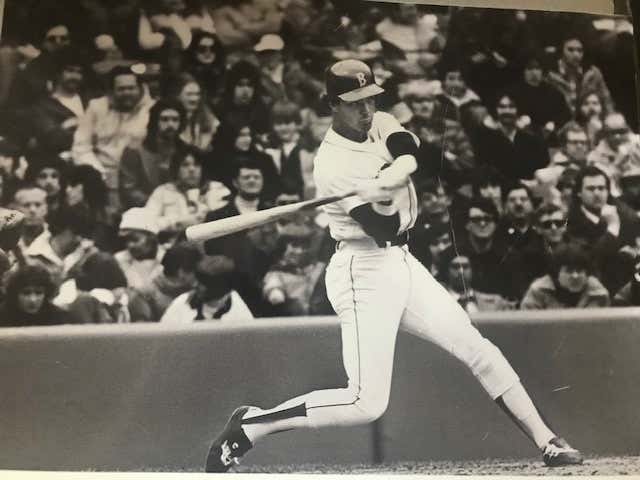 Jake continued, “I cut it out and framed it because Killa and I were in it. And here he is!” 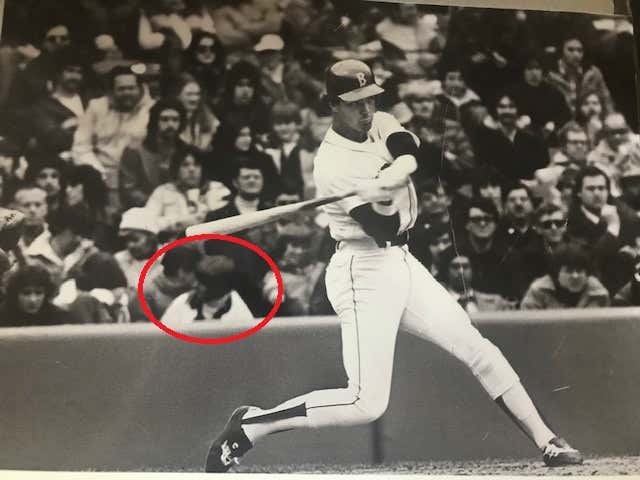 In fact, Jake was cropped out, putting Killa in the exact lower left corner of the frame. Years and years later. Decades after he died. At a bar that didn’t exist when he was alive, and was redecorated a short time later. After a game that was played in part as a tribute to him. Moments after his father took a picture with us in front of it. At a spot randomly selected by the friend who held onto a framed copy the same photo all these years. There, in fact, he was.

Keep in mind, there is nothing the least bit famous about this picture. Except to us. This wasn’t Fisk waving the ball fair in Game 6 or Gedman throwing the ball around the infield after Clemens’ 20th strikeout. Back when the sports section was 18 pages deep, there were a half dozen photos like it after every game. And yet our late, still missed friend showed up in it on that one particular day.

We stood there, struck dumb, staring at the image and each other, trying to process it. And speaking for me personally, my first thought was, whatever this is, it’s not a coincidence.

I’ve given this a lot of thought in the years since. And it opened my mind up to possibilities I was not open to before this happened. If you were to ask me to I really think my deceased friend arranged all this from the great beyond or something, I can’t really say that with all honesty. But I can say that, of all the possible explanations, this all just being a series of unrelated coincidences with no other meaning is the least plausible.

I believe in science as much as the next guy. But I deeply believe what science has discovered so far is not anywhere close to explaining our existence. Our knowledge is limited. Our understanding of our own reality is narrow. There are things that cannot be measured. We are highly evolved mammals, but there is much more to us that doesn’t show up on instruments. Our Being is more than what’s contained in three pounds of fat and tissue inside our skulls. Our thoughts are more than just electrical impulses running around in a network of neurons. Love is more than just biology tricking you into wanting to mate and protect your young. Call it consciousness, spirit, soul. But I believe that there is a part of us that survives death. And on at least this occasion, I’ve witnessed what its capable of.

As a final note, I’ll end it with this. When my family and I got home from Fenway, I pulled out my high school yearbook and found this signature from graduation day. It had to have been in context of a sports argument that I’d long since forgotten. I was a shameless Red Sox homer and hated the Yankees even then, and apparently had taken some grief for it. Using my high school nickname, the signature reads:

Radar,
Reggie is great.
Evans is a bum.
But the Sox will win it all this year.
-Killa