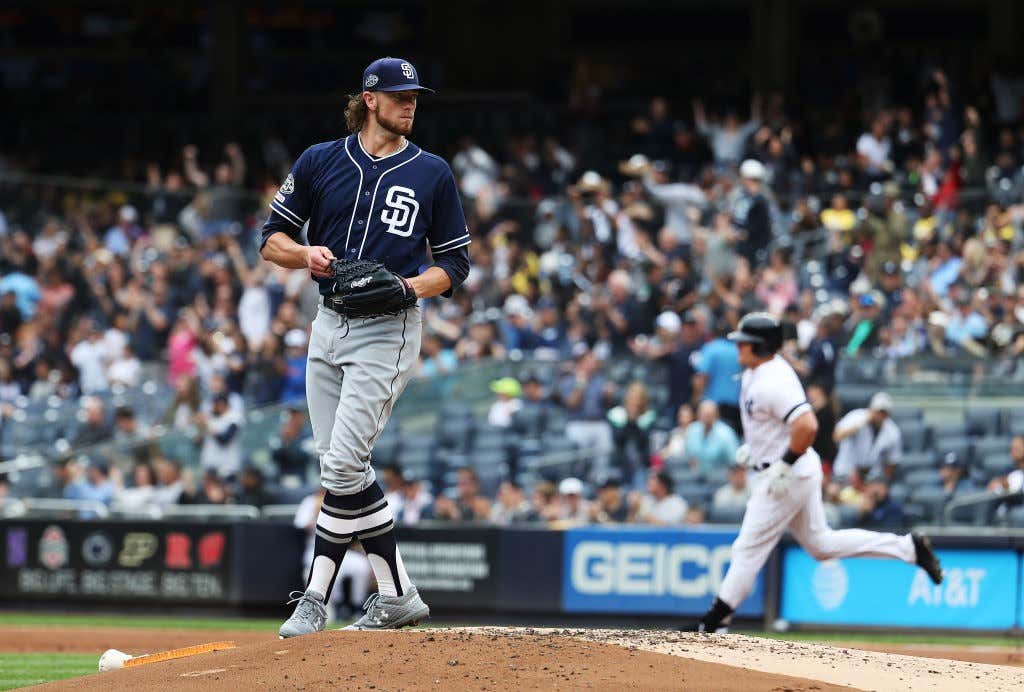 Baseball is so much fun when you’re winning. It really is. Even today the Yankees came in knowing Paxton was not going to go deep and they were facing a very good Chris Paddack without Gary Sanchez or Aaron Hicks. What ended up happening? They combined to four hit the Dads and shelled Paddack. It just does not matter who it is, someone is stepping up every day and doing damage. It’s remarkable.

After a dominant first inning from Paxton, the bats got things going right away with back to back blasts from DJ and the King. Paddack has been known to rise up in these big games and really come out firing. He was shook from the start. Today Chris Paddack showed he was mortal. That’s been the narrative for most pitchers when facing this lineup lately.

The Happy Fella, Gio Urshela followed up in the next inning with a blast of his own. The guy just doesn’t stop (guest on The Short Porch tomorrow by the way subscribe, download, listen).

He also made this ridiculous play in the field to take away a double from Kinsler. This was a INSANE pick at third and he made it looks so routine. I love this man.

From there on it was smooth sailing. Gleyber hit another homer against the Padres and continued his huge 2019 season. No sophomore slope for that man, no sir.

James Paxton was excellent in his four innings of work, striking out seven without allowing a hit. His pitch count got a tad high and he was on a limit from the start so he was pulled after four frames. The rest of the pen, including a much better looking Chad Green, completely shut it down from there on out. Goddamn this team is good. Did I say that already? Ok, good.

What do you get when you combine a Ferrari and a Mack Truck? Luke Voit. Here’s his triple today in glorious fashion.

They’ve won 8 series in a row and 12 of their last 13. They’ve been the best team in baseball for well over a month now. It’s not longer Win. Get Hurt. Repeat. It’s Win. Dominate. Repeat.

New Short Porch out tomorrow with special guest Gio Urshela and not so special guest Jared Carrabis afterwards. Barstool at the Ball Park tix are on sale. This Sunday night is the first game and it looks like it’ll be our good pal Davey Bitch Boy on the bump for Boston. Gary Sanchez smells blood. Buy your tix now and get ready for fireworks.