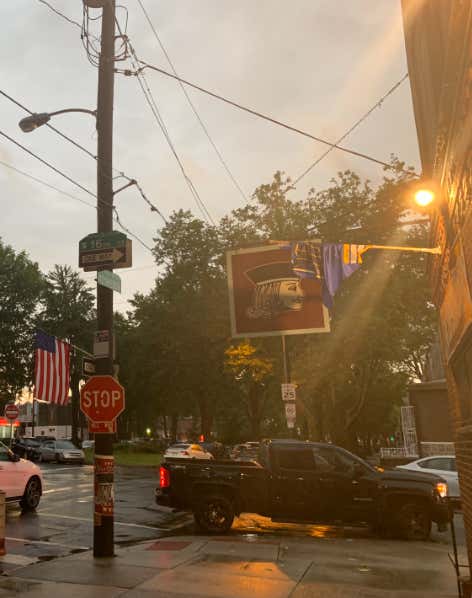 About three miles from Center City in the depths of South Philadelphia a small, brick, members-only Mummers clubhouse sits at the point of two tidy, row-home crammed streets. Jacks NYB (New Years Brigade) is marked by square sign with a deck-of-cards ‘Jack’ on it that watches over passers-by, & an American flag graces the adjacent (grease-free) telephone pole. It’s a pretty standard scene for the area, & only thing that might make you double-take is the crumpled flag representing the most beloved sports team there at the moment… And that’s because it’s not for the Phillies, Eagles, Sixers or Flyers like you might expect. It’s for the St. Louis Blues.

After seeing that YP had stopped there Friday night with Boris on his trek back to Saint Louis, I knew it was legit & that I had to get down there for Game 2. After a weird text to Dave where I tried to explain what a Mummer was before giving up & just asking if I could go, I got the green light & off I went. 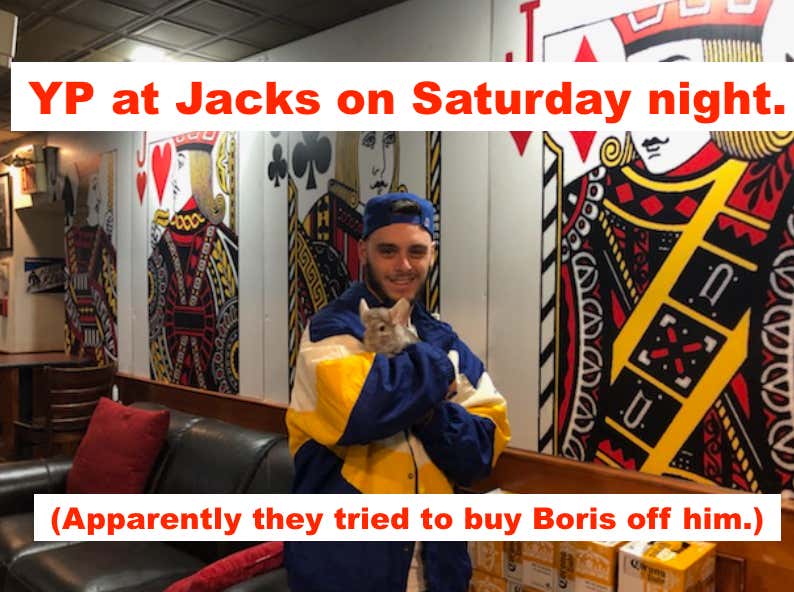 When I got there in the pouring rain yesterday evening one of the founders, Jerry Foschini, greeted me, placed an icy beer in my hand, & let the door guy know I was good. Music was blasting & the whole space was covered in Blues posters & decorations, bright blue liquor shots were being passed around, and a dart board was covered in hole-poked Bruins.

Still true to Philly, there were tables with broccoli rabe, piles of provolone & Liscio’s rolls, sausage & peppers, pasta… all the good stuff. Every now & then someone would take a rag to the AC vent pipe above us to keep condensation from dripping down on the growing crowd & DJ equipment. 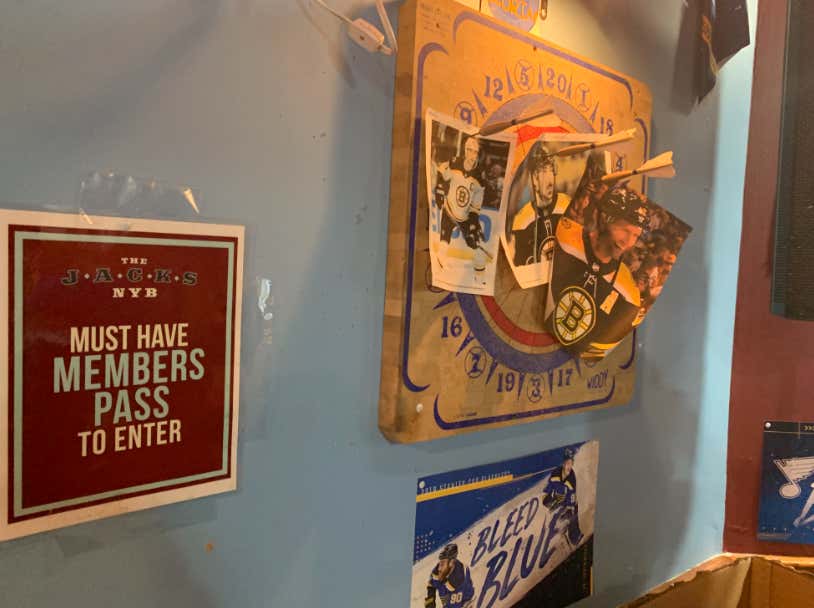 So how the hell did a South Philadelphia Mummer’s club get to this point?

It all started in January when five players for the Blues (Alexander Steen, Joel Edmundson, Robert Bortuzzo, Jaden Schwartz & Robby Fabbri) stopped in during an Eagles playoff game. Apparently one of the bartenders had been watching Wolf Of Wall Street a lot & had fallen in love ‘Gloria’ from the soundtrack, so he had it on heavy rotation. Everyone loved it & friendships were forming.

“It’s not supposed to be like this. When the Blues first came in we started doing the Flyers chant, but they were really down to Earth. Just here for cheesesteaks and beers and a good time. They weren’t superior acting. These guys were chill.”

The Blues players must have felt the goodwill because when the night was over, they packed up “Gloria” & brought it home to St. Louis with them as their season kicked into high gear. As the wheels fell off for the Flyers & the Blues picked up steam, word got around that St. Louis fans had a special place to go in the city when their games came on.

I spoke with a St. Louis native, now a coach in Philly who helps prep kids aiming for hockey scholarships. He told me he’d heard about Jacks from the parents of one of the kids he trains. Another guy said this was his 5th Blues game at Jacks, and that he’d traveled up from D.C. just to be there for game 2. There were also Missourians who trickled in from the rained out Phillies/Cardinals game; they’d seen the spot mentioned on an NHL blog. Most impressive, a guy named Parker had come all the way from St. Louis and he wasn’t the only one who’s done that so far:

At 43 members, the Jacks Mummers Club itself is small in the scheme of Mummers groups and this is only their 3rd year in existence & 1st year with their own clubhouse. They’ve all got full-time jobs and most have families, but they’ve taken the time to go all-out for Philly-area Blues fans in their spare time. One of the bartenders tells me it’s tough to put it all together for each game, but totally worth it.

When I go out to smoke before the game starts, a couple in Blues jerseys walk up to the door where the words “Members Only” are clear.

“Excuse me, hey, we’re in town visiting but we’re not members, can we still come in?”

They are welcomed in with a cheer by the whole crowd.

As the National Anthem starts, the bar area is packed nut-to-butt. It’s a sea of blue (they’re selling their own Gloria shirts) and I can’t tell who is a Flyers fan & who’s an actual Blues fan, but everyone removes their hats & sings along facing the stars & stripes. As soon as the song ends, ‘Gloria’ starts blaring followed by Mummer’s song “The Gang’s All Here”, & everyone goes wild strutting, ready for puck drop. 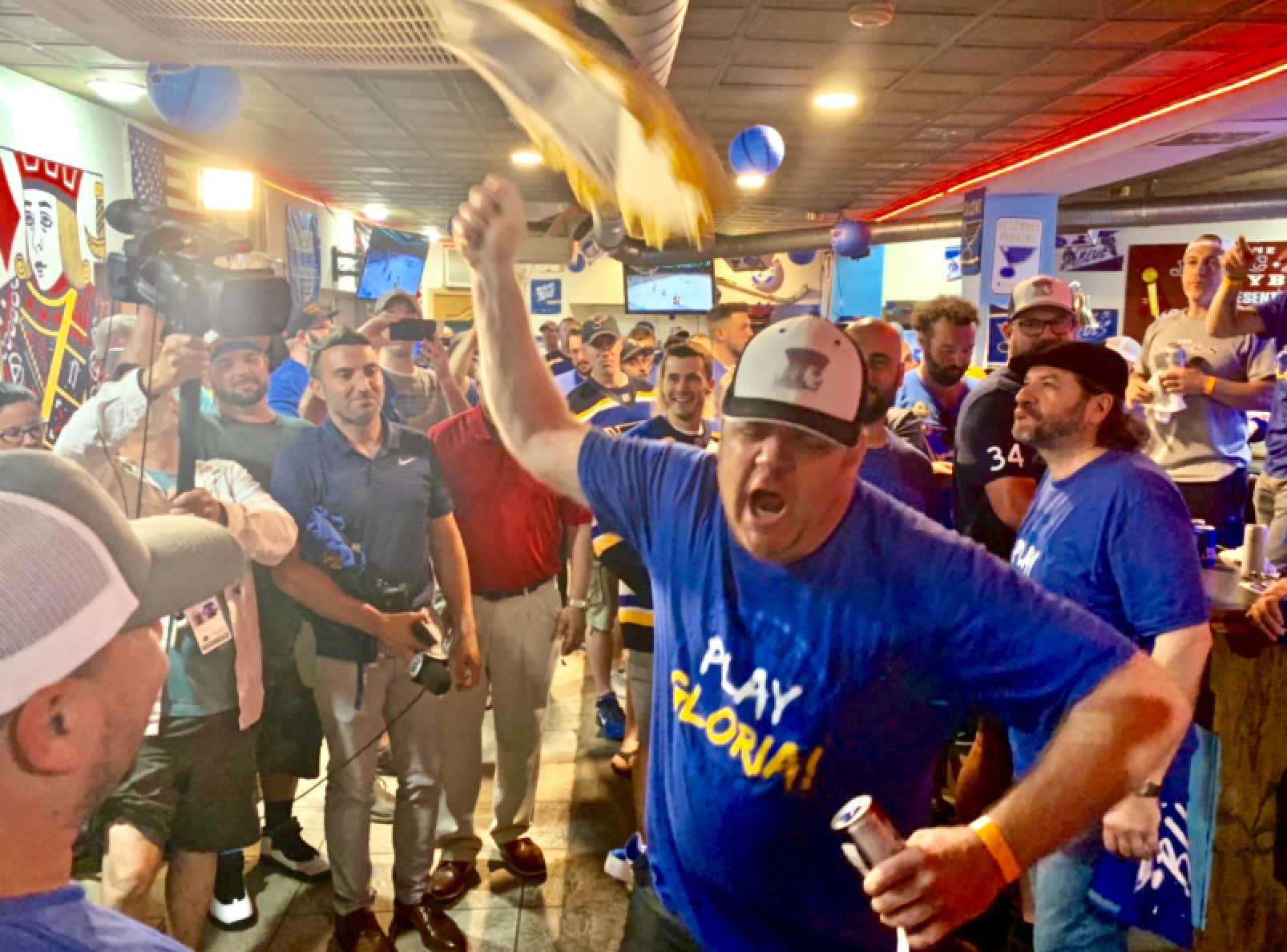 With each goal there’s either a huge celebration or a cornucopia of curse words & cup slamming, & suddenly the game is 2 – 2 in overtime. My train is in 45 minutes but I don’t want to leave because I’m having such a good time & I start thinking about calling up my Aunt Peg to see if I can crash in her basement again. But then – Gunnarsson scored & the place exploded.

One after the next, Flyers & Blues fans took turns chugging from a trophy, people were dancing on the bar, everyone got on the floor to ‘Shout’… The vibe was so incredibly good. And I felt like it wasn’t so much Philly fans rooting for the Blues, but for the Blues fans & the city. The whole thing seems to be a seed of good will growing bigger each week, getting crazier & more fun along the way.

You always hear it…

Yeah, yeah… Those who hate us love to bring up stories like the Eagles/Vikings game when fans focused their losing-streak anger on a bright red target; the halftime Santa Claus. They unleashed “a tsunami of snowballs” in Santa’s direction and though the icy chunks would melt, the moment would live on as a testament to ‘how cold Philadelphians could be’… an anecdote still used to this day, over 50 years later, by hacks who aren’t creative enough to rip on us otherwise.

And fine, the Philly sports world might be a little rough around the edges sometimes but its also got a heart of gold, and last night a couple blocks off South Broad those gold hearts were bleeding blue for Saint Louis fans.