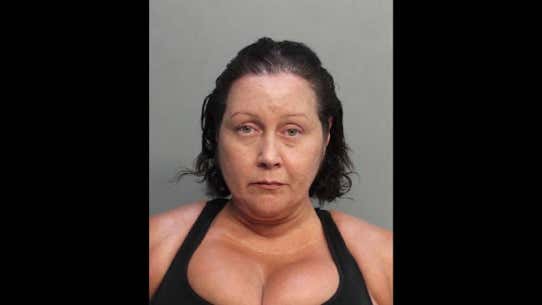 Source – When two women couldn’t get free fries from a Burger King drive-thru, they went inside and beat up the manager, cops say.

Natasha Bagley, 42, was arrested Monday over the April 2 Burger King incident. … Her accomplice, 27-year-old Genesis Peguero, is still at large.

About 5 p.m. on April 2, Bagley and Peguero drove into the drive-thru lane at a Burger King at 18240 S. Dixie Hwy, asking for free fries, police say. A BK employee did not give them free fries, according to the police report.

Minutes later, Bagley and Peguero went into the restaurant asking which one of the employees called one of them a “bitch.” Peguero then jumped over the counter and the BK store manager came out of her office.

Peguero demanded the manager open the register and give her the money. The manager told police that Peguero was threatening to hit her with a pistol, police say.

The manager tried to call police on the store phone, but Peguero snatched the phone out of her hands before she could call. Peguero then began to punch the manager, and Bagley jumped over the counter and joined in on the beating, police say.

They both jumped back over the counter and started to leave, when Peguero turned around and ripped the registers and monitors from the counters.

I believe it was Prussian General Carl Von Clausewitz who famously talked of never starting a war that you haven’t already won. Von Clausewitz was not a defeatist as much as he was a realist who saw all war as a lose-lose proposition. In “Star Trek,” they refer to this as Kobiyashi Maru: The Unwinnable scenario.

Consider the case of this Burger King manager. She could have just given Natasha Bagley and Genesis Peguero their free fries. The accounting would’ve been off by whatever two small orders of fries cost at BK’s, probably two bucks or so, and they’ve have been on their way. But the more likely outcome is that would’ve decided they are entitled to free fries as a birthright. And then kept coming back for more like birds when you put a bird feeder in your back yard. She’d have never been rid of them and the situation would only get worse.

The other option would’ve been a preemptive strike. Go out into the drive thru area, pull Natasha out of the car and beat her to a bloody pulp at the mere suggestion of free eats. That would’ve established her dominance and sent a clear message this was one BK’s manager who was not to be trifled with. But that leads to messy inquiries and probable dismissal.

So I think she took the best option available given the information she had. And paid a price for it. The only consolation being that that is exactly what you sign on for when you take the head job at a fast food place along the Dixie Highway in America’s Dong. It’s not a job for the timid. You pin on that manager’s badge knowing that it’s inevitable you’ll have some 42-year-old Florida swamp donkey jumping the counter and throwing fists. But you stand on the principles that if there are free fries for one there must be free fries for all and you have to draw that line on the floor.

I just hope all burger places will teach this in their academies so all future managers in Florida will know what to expect and choose the only course of action available. Now let’s just hope Natasha goes to jail and Genesis is apprehended so we can prepare for the next senseless fast food attack.