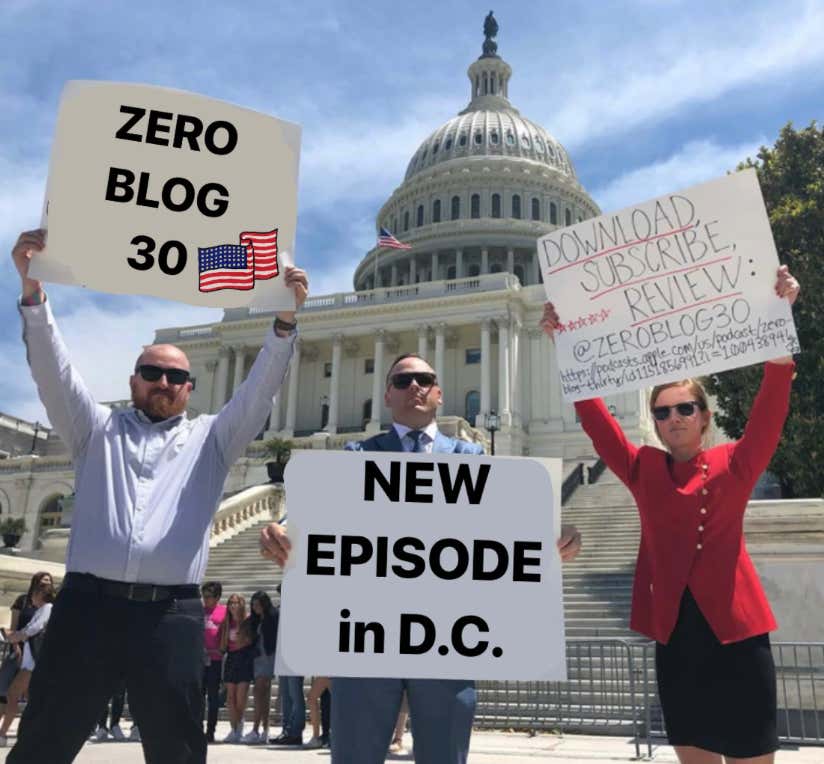 We try to keep our podcast light & steer away from partisan politics as much possible because there’s enough divisive shiz out there already & we want anyone – civilian, veteran, active duty, left, right, salt-dogs, boots, women, men, Jason Bourne – to feel like they can listen & enjoy. But we also think it’s important to highlight veteran politicians & see where they stand on issues that matter to us… Foreign policy, lessons in leadership, are UFO’s real, the VA dragging their feet on medical marijuana…

For two days we bounced between the Rayburn & Longworth buildings, often forgetting which one we were in & getting lost, speaking with U.S. House Reps.

We interviewed a Presidential hopeful, sat with the fastest gent on The Hill, & had some back-and-forth with a Rep. making waves for his takes surrounding the *Eddie Gallagher trial. (*A Navy SEAL accused of various, serious war crimes. The case seems to be a bit of a mess at the moment, as you can read here.)

Especially among the vet community, it has understandably brought about a ton of discussion on our rules of war, moral codes & responsibilities during conflict, and there’s been a lot of contention between the #WokeVet vs. #VetBro tribes. (For the record in general, ZBT’s stance is ‘war crimes = bad’. No shit.)

So when the first in our series of interviews came out yesterday it caused a stir. Guest 1 was the wave-maker; Marine Corps veteran & Rep. Duncan Hunter of California. As a field artillery officer he served two tours to Iraq & one to Afghanistan & was the first elected Marine to have seen combat in both countries. He’s also been highlighted on Barstool before:

And full disclosure, we knew he’d been in the news for not-so-savory things before.

But when the offer came through to visit his office we felt it was important to sit down face-to-face & ask him about his spear-heading of the effort to free Eddie Gallagher. He’s already got his own platform as a member of congress so why not bring him to our own & try handle it our way?

Well, though we knew his background, it was still a shock to hear some of these ideals in person.

It’s a relevant topic in the community we cater to, and we thought people would be interested to hear from one of the more ‘colorful’ sources causing vet-world discord. At no point did we think, “People are going to hear this & side with him. He’s going to mold minds!” (Because we trust that are audience aren’t fucking morons.) But as Chaps would say, “There’s two schools of thought…,” on whether we’re giant douche-nozzles for having him on, and as per-usual on Twitter, people were quick to let us know either way.

We accidentally burned some bridges: 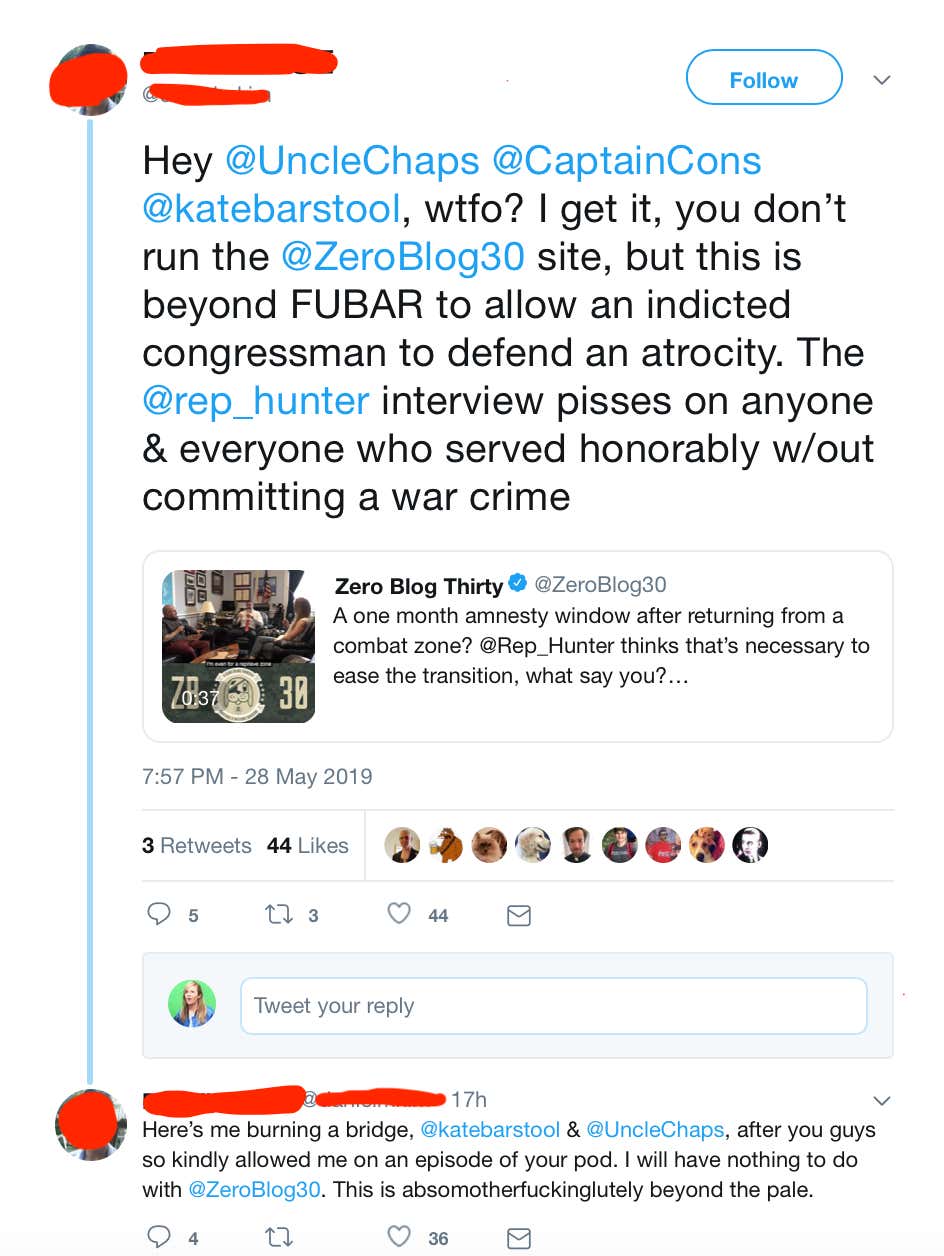 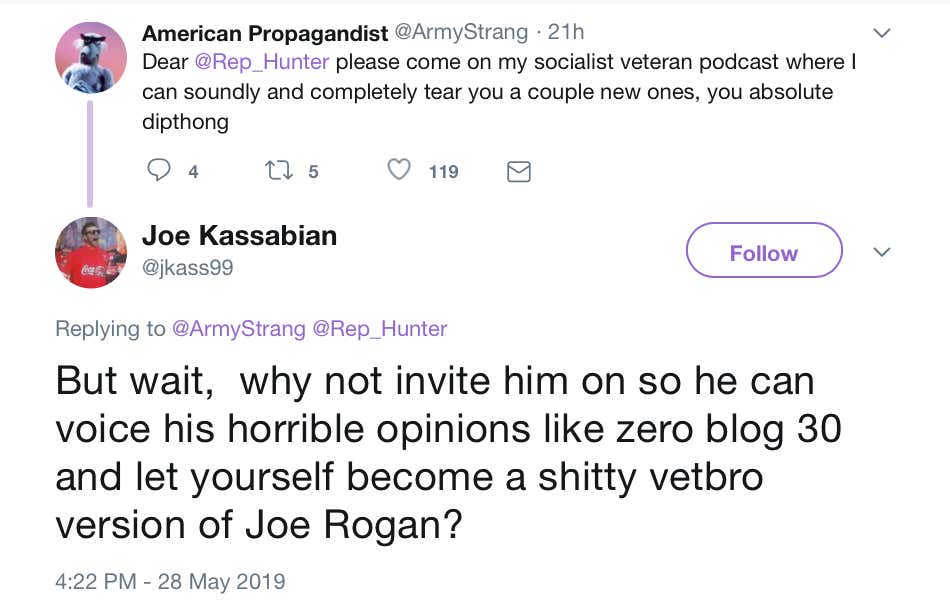 Thankfully others saw it closer to what we felt & intended: 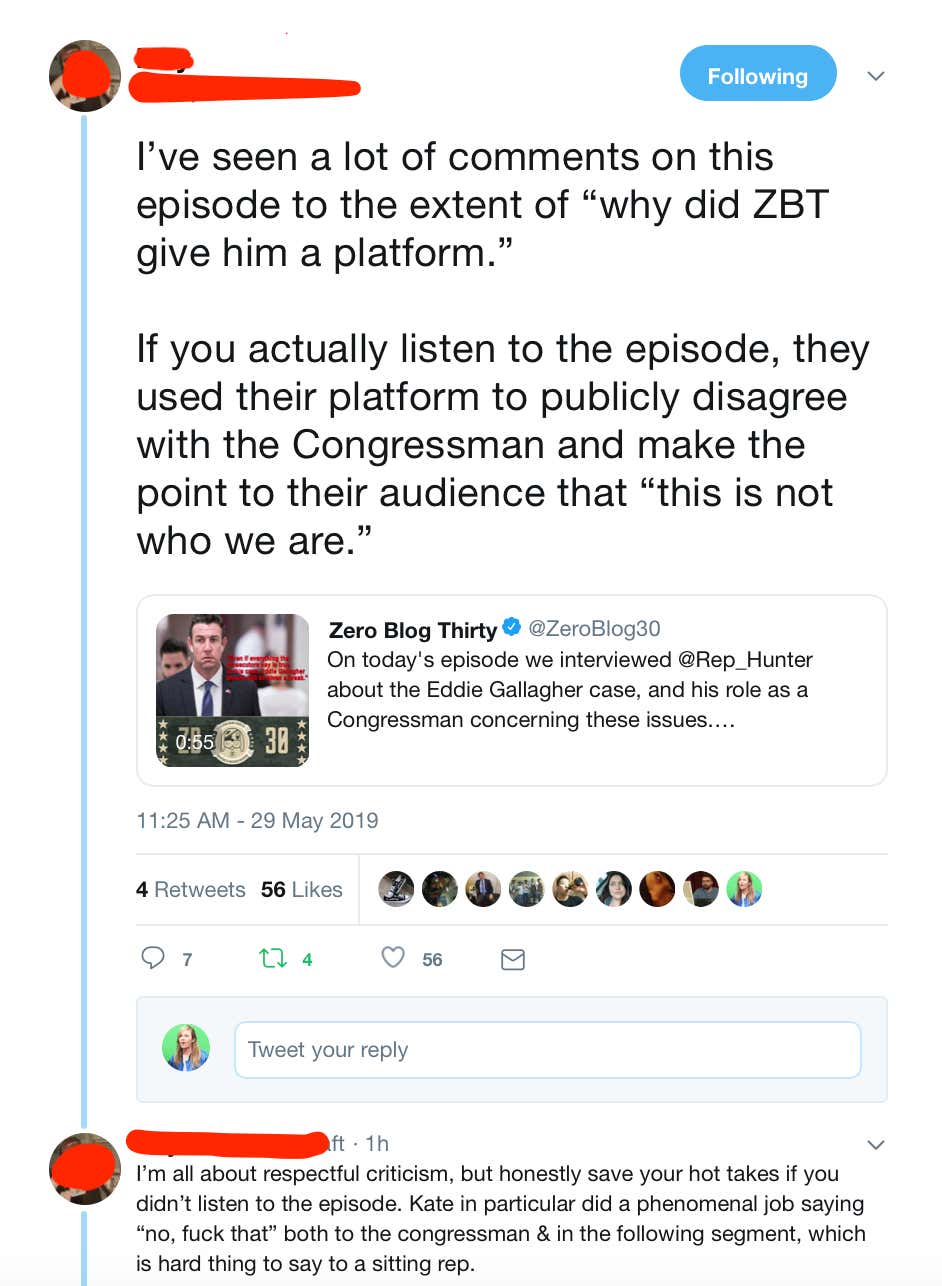 On our own front we were open on both the pod & #online about how we also felt conflicted about it, what we wish we’d done differently in the moment, and that we did not agree with the congressman’s sentiments.

All the anger that came at us isn’t surprising (sometimes working at Barstool is enough to set people off regardless of what you’re doing), and some of the points were valid & are things I’ll consider moving forward, and I’m sure this will get dissected & ripped on regardless as well (please just leave my grammar alone), but part of me really wants to let loose & say, “Save your brave, fiery rage for more important things, dweebs.”

Save your brave, fiery rage for more important things, dweebs.

We’re not Big J journalists, we don’t have an agenda, and we’re not perfect, but we try to do everything with good intentions.

We’re a podcast that highlights guests who are Medal of Honor recipients, politicians, veterans doing amazing things post-service, actual Big J journalists, officers, enlisted folks, military spouses, and more. We’re unafraid to talk about mental health, our own struggles with those issues, and know the importance of asking others to look out for their buddies & seek help if they need it. We don’t punch down & have officially #rebuked “vet-bro” sites that use racism & sexism as ‘humor’ or as a way to further some wacky political agenda. So I don’t know what else to tell you.

Also on that D.C. trip I found myself ripping cigs (about 10 of them! my voice is still fucked!) with former Speaker of the House John Boehner. Sitting there sipping Chianti & listening to him rag on Ted Cruz was neat. It was one of those D.C. moments that just happens & leaves you going, “Wow – What is life?!”

I’m grateful to ZeroBlog30, the experiences its afforded me, and the people I’ve met along the way. I’m glad I have the presence of mind to be open to people & trust that whether I agree with them or not, I’ll know where I stand & not be afraid to speak my mind.

So if you’re still mad, fear not, you won’t be able to smell this smoke from your high horse.

You can check out that full episode here: