This was one of the tougher moments to try and not sob in front of a room of people. Standing 1 foot away from one of the toughest fighters in St. Louis history and Pat Maroon after the Blues were officially on their way to the Stanley Cup Finals. The Blues have been rallying around her since November and helped spread the word about Bone Marrow registration and luckily helped find a match in December. After only going to the hospital and home for 4 months, which is equal to a decade in 10 year old time, her mom and the Blues surprised her with tickets to Game 3 vs the Sharks.

Well after the Blues got absolutely robbed by the crooked referees, she was luckily able to come back to more games and the boy absolutely battled to get her 3 more wins to win the series, leading up to this moment last night.

What an unreal human being. I met Laila just after this and was incredibly impressed with how smart and sweet she was. She’s been forced into a tough situation and asked to have perspective on things that most “grown-ups” haven’t mastered yet at such a young age, and done it with flying colors. To see someone deal with adversity and not flinch for a second is the most pure inspiration you can possibly find. The Blues have fought their ass off for Laila and I hope they give her a beautiful silver present in a couple weeks. She deserves it.

Guess what? FIRST SHE WENT TO THE WESTERN CONFERENCE FINALS… NOW LAILA IS GOING TO THE STANLEY CUP FINALS!!!! BRING HER A CUP! 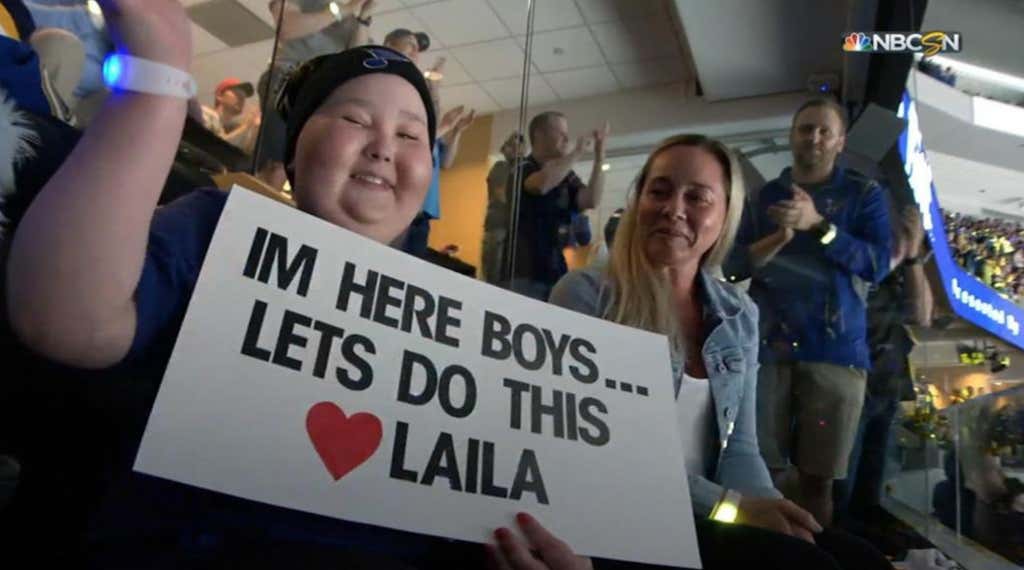