You don’t have too go far to find WTF tats on the Internet. So many piss-poor decisions while blacked out litter the web. Bad, foolish, and ugly tattoos all over. And there’s always the dummies who get championship tats before their teams won shit. But I think we have to start a new category for this specimen. 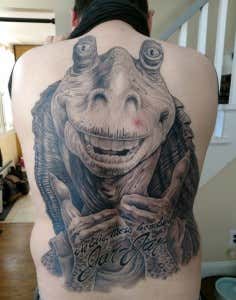 Holy bantha shit! A Steve-O-inspired full-back tattoo of Jar Jar Goddamn Binks. I have of couple of small ones and lots of buddies with full sleeves yet I have no idea what would inspire a fella to do this to himself. But apparently, it’s camp. You know, the tragically ludicrous, the ludicrously tragic! Hey man, do your own thing.

I mean, getting a tattoo of the most hated-character in a beloved, fictional universe spanning 11 movies and thousands of creatures is a pretty ballsy call. And make no mistake, Jar Jar Binks is hated even more than a genocidal military commander, a children-killing traitor, and the script for THE PHANTOM MENACE.

But this isn’t some regrettable tramp stamp or ass-tat or even an old-fashioned forearm job like Popeye’s anchor. And it wasn’t some off-the-cuff thing. My man had to sit for hours to get this done. THIS IS A FULL-BACK TATTOO OF FRIGGIN’ JAR JAR BINKS INSPIRED BY A GUY FROM JACKASS.

Bonus points for that back zapper that makes JJB look like a 15-year-old.