Source – AN EXORCIST was called in to chase demons from a “Satantic” statue with a “glaringly erect penis”.

The statue has been made by well-known local painter and sculptor Luigi Ontani, 76.

His latest creation of the fawn that has caused such debate was unveiled a month ago in the village of Vergato near Bologna in northern Italy.

It has sparked outrage from political groups and Christians who have branded is “satanic”.

Depicting a fawn, the statue shows the creature with horns an an erect penis carrying a boy with butterfly wings.

Local MP Simone Pillon from the Northern League described the statue as “Satan personified”, adding that it needed to be “covered in concrete”. 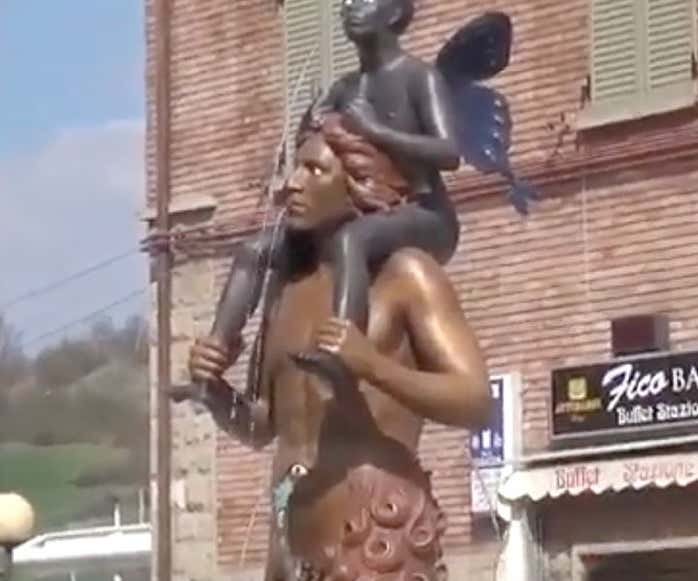 So typical. This is exactly the sorts of monkeyshines we’ve come to expect from the Prince of Darkness. When he’s not busy creating widespread inhumanity, starting wars or inspiring Heavy Metal bands, he’s putting boners on statues. Beelzebub is like an unsupervised teenager with a pen, scribbling dicks all over his friends’ notebooks. And his canvas is our finest works of art like this otherwise not-at-all creepy fawn giving a shoulder ride to a butterfly boy.

For shame, Satan. Causing genocides, fostering hatred and sewing the seeds of cruelty in the hearts of men is one thing. But when you start defacing our artwork with your sophomoric tomfoolery, you’ve gone too far.

As an aside, if you’re a skeptic who doesn’t believe in the paranormal or the spiritual, how do you explain exorcisms? Kid starts acting all crazy. Things are flying off of shelves seemingly on their own. Doctors can’t explain it. Science can’t explain it. Cops can’t explain it. So they make the call to the Catholic priest bullpen and bring in the ace. Boom. Problem solved. Now here’s a place in Italy where the statues are sporting wood and who makes it go away? Father McFuckoffsatan, armed with nothing but a cross, a Bible and some holy water. Making that stiffie go away faster than the bathtub lady scene from “The Shining.” You’ll be safe now, good people of Vergato. And you’ve got the church to thank for it.