[New Yorker] - I read these scripts coming on to two years ago now. When I did, I took a very long walk around London in a daze, not quite knowing how to digest the news. I had no idea what to expect for this last season. I hoped for some juicy things to get into, as I always do for each season, but I didn’t see this coming.

I know everyone has a take on Game of Thrones. To me it was like the Pelicans winning the Zion lottery. All this hype. Would it be the Knicks? And it ends with some dumb cliche like David Griffin’s lucky tie. Bullshit.

But, the real thing to me is how the actors and actresses from the show have talked about it. Clem blogged about Bran Stark (it just doesn’t feel right using their real name) and how he thought the ending was a joke.

Here are two other headlines from the last month: 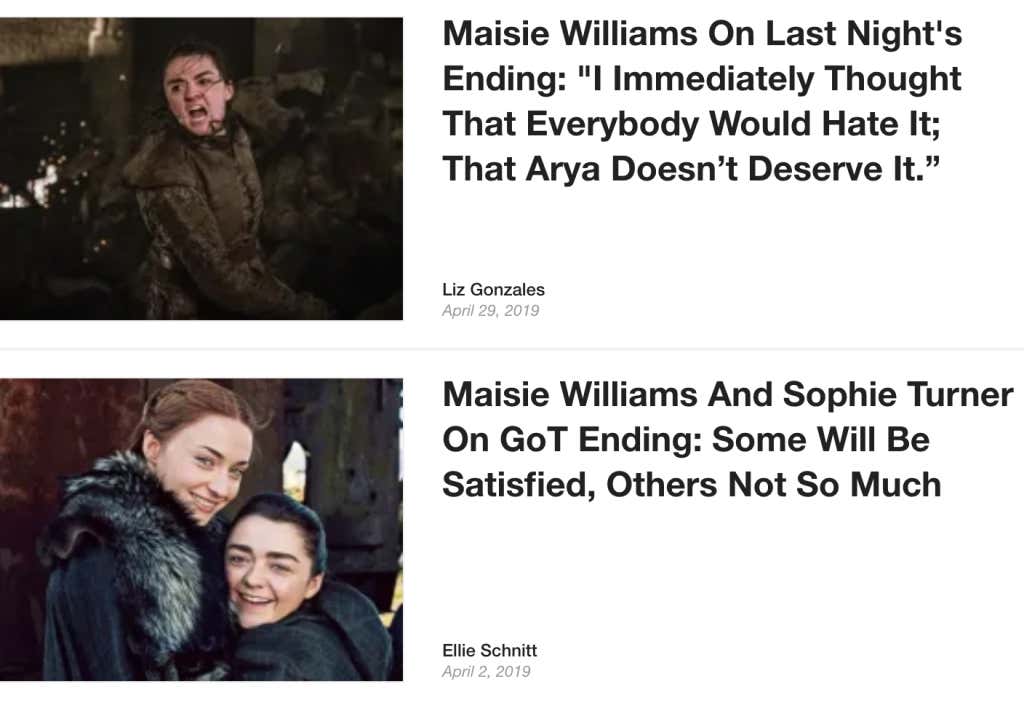 So now we have Emilia Clarke saying she walked around in a daze two years ago when she read the script. Sure, it could be the fact she realized she was turning into a villain after being a hero for 7 seasons. Sure, it could have just been the ending.

But, don’t you think that reaction could have been brought up with the writers a little bit? It’s not exactly crazy thought process and likely a repeat: pushing the final season into 6 episodes made it bad. If you could have spread this season out or even add another season people may have been more satisfied even with Bran ending up on the throne.

And how about upsetting the queen? No, not the mad queen. Queen B, obviously.

“I see this vision, this angel, this incredible woman float towards me,” Clarke recalled the other day. “I can’t quite control myself. And Beyoncé says to me, ‘Oh, my goodness, it’s so wonderful to meet you. I think you’re brilliant.’ I just couldn’t handle it! I was on the verge of tears. I could see myself reflected in her eyes. I could see her go, ‘Oh, no. I misjudged this. This girl is crazy and I’m not going to have a real conversation with another celebrity. I’m having a conversation with a crazed fan who’s looking at me like a rabbit in the headlights.’ Which is exactly what I was. I said, ‘I’ve seen you live in concert and I think you’re amazing and wonderful! Wonderful!’ And all I wanted to scream was ‘Please, please still like me even though my character turns into a mass-killing dictator! Please still think that I’m representing women in a really fabulous way.’ ”

I need Beyonce to come out and bash the ending. Feel like that would get some more people on board with it. At least flip the remaining idiots who loved last night’s episode.