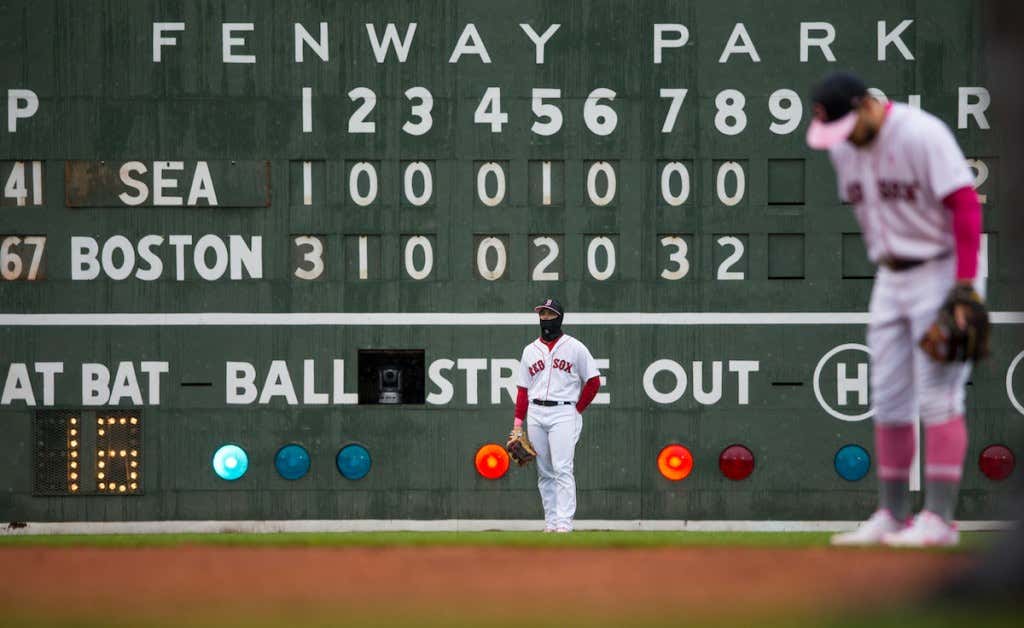 It was a cold and rainy Mother’s Day at Fenway Park, but the hottest team in baseball (that would be the Boston Red Sox) put on another show for all you moms out there on Sunday.

Fourteen runs on Friday, nine runs on Saturday, and eleven more runs on Sunday — thanks for comin’ out, Seattle. The Mariners quite literally couldn’t wait to get out of Fenway. About an hour and change before the game, there was an unconfirmed rumor that some of the Mariners’ players hadn’t even showed up to the field yet. Banking on a rainout? Praying the Red Sox would have mercy on their poor souls? There was no rainout, nor was there any mercy to be had at Fenway Park that day.

Hector Velazquez starts this year have pretty much all been bullpen games for Boston, but with David Price on the injured list and Velazquez getting stretched out with each start, the righty went a season-high five innings in this one, yielding a pair of runs before handing things over to the bullpen. Marcus Walden took it from there, throwing two shutout innings with Josh Smith grabbing the final two innings, also of the shutout variety.

The pitching staff holding the M’s to two runs was great, but I’ve gotta be honest, the whole scoring a shit ton of runs thing was way cooler. I love when the Red Sox score a shit ton of runs. It’s so fun. I hadn’t realized this, but apparently JD Martinez hadn’t homered at Fenway yet coming into Sunday? Weird. Well, he hit two in the series finale, his seventh and eighth to move him ahead of everybody on the team except for Mitch Moreland, who surprisingly has 12.

It’s crazy that I’ve had to write this multiple times over the last couple of weeks, but it seems that the only way to stand out in the box score recently has been that you’ve gotta hit two homers. JD did that, but there were others who had themselves a day at the plate and I think there are many folks out there who are sleeping on just how good Rafael Devers has been. The 14-year-old had three hits AGAIN on Sunday, his third three-hit game in a row and his 11th multi-hit game in his last 16 games. He’s now hitting .336 on the season, which leads the team, and is good for second best in the American League.

Michael Chavis also had a big day at the dish, breaking an 0-for-19 skid with a 3-for-5 day with a career high 5 RBI. Some of those runs batted in might’ve been aided by the shitty weather, but the box score says what it says. Speaking of underrated performances, Christian Vazquez had two hits on Sunday and he’s now got three multi-hit games in his last four. Boston’s backstop started the month of May hitting .222 with a .709 OPS, and now he’s up to .278 with an .821 OPS on the year. Alex Cora spoke about this after the win on Saturday, talking about how the Red Sox truly become a dangerous team when the bottom of the order starts hitting. They’re doing that, and look at what Jesus did. 34 runs in one weekend.

With the sweep of the Mariners, the Red Sox have now won 11 of their last 13 games and 16 of their last 22. They’re now 3 games back of first place, two and a half back of the Yankees, who beat the Rays on Sunday. Read into it what you will, but with their convincing victory on Sunday, the Red Sox now have the best odds to win the AL East and the World Series in 2019. I don’t know how that shit is calculated since the Red Sox are still in third place, but it’s a thing and I don’t question the nerds, especially when their data works in my favor. What we CAN read into is that the Red Sox improved their run differential on the season to +27 when they were in the negatives a week ago. Now we go.

After stomping a mudhole in the Mariners’ collective asses and walking it dry all weekend, the Red Sox get a much-needed day off on Monday before welcoming the Rockies in for a quick two-game series on Tuesday. I’m looking forward to this matchup; it’ll be Chris Sale versus Kyle Freeland, a pair of nasty lefties. Sale has been outstanding recently, posting a 1.73 ERA with 42 strikeouts in his last 26 innings over four starts, including an eight-inning, 14 strikeout performance his last time out. Freeland enjoyed a breakout year last season, but has struggled so far in 2019, allowing the most earned runs in the league. He was decent his last time out, allowing three earned runs over five innings to the Giants.