If I’ve learned anything over a lifetime of being way more invested in all four New England teams than is good for my emotional well-being it’s this: This place is not for everyone. We care way more than other places do. Coming here after you were cock of the walk in some other market is to step into a spotlight that blazes white hot. Some men embrace it. Bask in it. A guy like Johnny Damon, just to pull a name at random, not only didn’t mind all the attention, he thrived it. And the more you turned up the wattage, the happier he was and the better he played. Men like that are the ones that built the Celtic dynasty and have delivered 12 championships in 18 years during the Century of the Masshole. And counting.

But there have been others that have withered and died in that heat. Even after proving themselves to be superstars elsewhere. I’m not talking about draft busts or prospects who didn’t work out. I’m talking just about established talents who just didn’t pack the gear to hack it in Boston. Just because they made there, didn’t mean they were gonna make it here. Or as legendary New Englander Quint put it, “Hooper, you might be a big yahoo back on the land, but out here you’re just super cargo.” 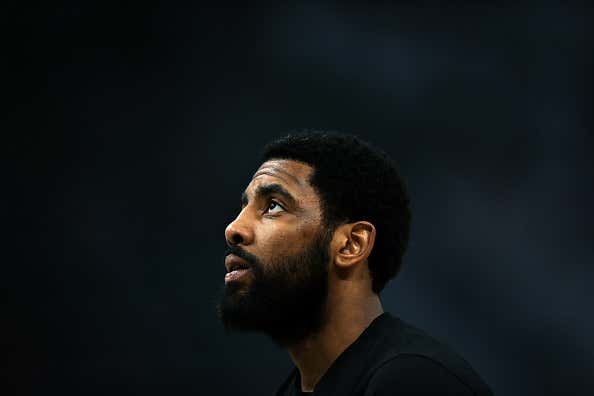 The most disappointing Chosen One since Anakin Skywalker. Since probably the 2004 Pistons, no team has won a title without a Top 10 player. Sometimes it takes more. And Danny Ainge got his. To go along with two established free agent stars and collection of talented rookies. And they spent two years playing better without Kyrie than with him. That’s a fact not in dispute. The chemistry of this team has been fried garbage:

And the guy who called himself the leader should be held accountable. Irving also said all season to just watch what he does in the playoffs. We did. 6 for 21 from the floor in a deciding game. 21 for his last 85. And zero effort on defense. As Kendrick Perkins put it, Kyrie Irving thinks he’s Batman, but he’s really Robin.

Chad Johnson could’ve been the Patriots Randy Moss 2.0. Instead he was Chad Johnson 1.2. A spectator, watching the 2011 Super Bowl run from the best seats in the house: On the field. After Tom Brady put up 512 yards in a win against Miami, Ochojohnson Tweeted: “Just waking up after a late arrival, I’ve never seen a machine operate like that n person, to see video game numbers put up n person was WOW.” Which made Tedy Bruschi blow a gasket, telling him to “drop the Awe Factor,” get off Twitter and learn his damn playbook. In the postseason he was a healthy scratch for one game and contributed one catch.

The hardest thing to find in Boston besides a parking spot is someone who’ll admit he bought into Rick Pitino’s hype when he took over the Celtics. So I’ll be that man. I had two buddies who were at his Garden ceremony when they lowered the banners and he promised to add to them and they looked at each other and said “This guy is going to win us championships. We should’ve known then what we were in for. Pitino’s first act after taking over the Celtics was to strip Red Auerbach of his presidency. His second was to lose the Tim Duncan draft lottery. This third was to settle for Chauncey Billups and Ron Mercer. Then dump Billups just 51 games into his rookie season. In between he managed to alienate everyone with his insufferable, micromanaging, Smartest Man in the Room over-coaching. We all wish his time with the Celtics lasted as long as his Italian Restaurant Booth Sex sesh.

In Carl Crawford’s 9 seasons in Tampa he made 4 All Star games. In 2010 he added a Gold Glove and a Silver Slugger and was 7th in the MVP race. He also played the Red Sox like MI6 issued him a License to Kill them. So the Sox bought him out with a 7-year, $142 million deal, not realizing that his game was best suited to playing in a dome. Specifically, Tropicana Field. More specifically, an empty Tropicana Field. He played in Boston like he’d pay them double just to go back. From 2010 to 2011 he lost .052 off his BA, .067 off his OBP, .090 off his SLG and an incredible .157 off his OPS. He did manage to have the exact same 104 Ks though. In 100 fewer AB. 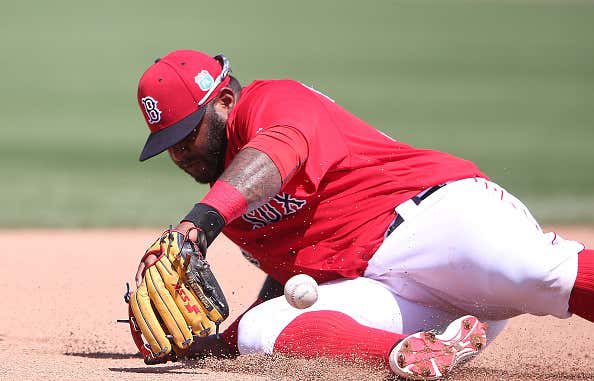 If ever there was an argument for not signing a player just for headline-grabbing, buzz-generating, fanbase-exciting reasons, it’s the Red Sox spending $95 million on this bucket of goo in 2015. I’ll go to my grave believing this was a marketing decision, not a baseball one. In the early part of the season Fenway was lousy with Panda merchandise and every trash can around the park had Sandoval’s picture. Which was entirely appropriate, as it turned out. Nobody bought his stupid gear. And all he’ll ever be remembered for is Carrabis catching him liking Tits McGee’s Instagram in the middle of the game, John Henry claiming his body fat index was 17 percent, and the magical moment when the tensile strength of his belt buckle couldn’t hold out:

I was on WEEI and asked John Farrell about it to his face. Somehow the humor was lost on him. But fortunately no one was killed in the explosion. Fun fact: Sandoval will make $19 million in HenryBucks this year. I hope they sold a lot of Asian bear hats.

Thomas would rank even higher on this list if he hadn’t put together at least one good season in New England. He fit into the team concept as a member of the “Backerhood” on the 2007 16-0 team. But that’s not enough when he was the biggest free agent signing in team history. And by his second season, he’d grown into that role of being your surly, malcontented co-worker who sucks the life out of everyone by just bitching about everything he’s expected to do to earn that paycheck thing the company gives everybody. Tedy Bruschi said as much in his book that listening to the guy in meetings questioning things that the dynasty was built on made him wonder if he wanted to come back for the 2009 season. He never made it out of camp before retiring. And leadership vacuum left by Tedy and Rodney Harrison retiring plus the trades of Richard Seymour and Mike Vrabel was filled by exactly the wrong person in Thomas. When he was sent home for being late during a snow storm, he famously said he can’t fly to the stadium because “this isn’t the Jetsons.” What Adalius Jetson didn’t mention is that all but four guys did make it on time. Including Brady, whose wife had a baby the day before. More than any other Patriot, he’s responsible for that ’09 team being so unlikable and underachieving.

Even recognizing that Shaq was 38 and Jermaine was 32 when Ainge signed them for the 2010-11 season, they still did less than nothing. Even though there was plenty of opportunity after Perkins was traded. They played 37 and 24 games, respectively, and generally acted like there was a One O’Neal limit, never seeming like they never dressed for the same game at the same time. Literally the only memorable thing Shaq ever did was this Harvard Square stunt. And here he showed about as much mobility as he did on the court the whole season. 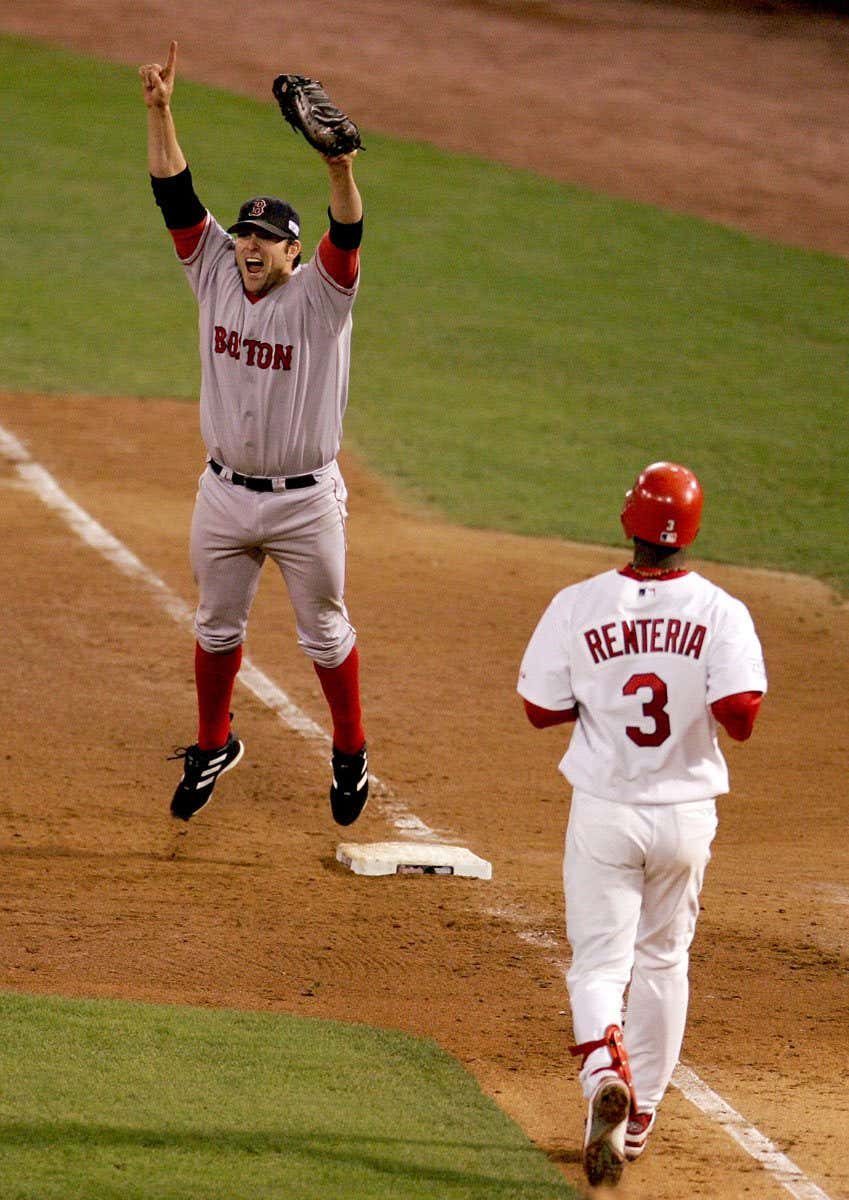 Remember after the 2004 World Series when Theo Epstein seemed obsessed with sending the perfectly capable Orlando Cabrera out of town and made hearteyes at Renteria in a way no one else really understood? And then when he signed him Tony Larussa said it was a mistake and Renteria would hate playing in Boston and we all thought he was just being a sore loser? He could not have been more right. Pre-Boston, Renteria was a perennial All Star with 2 Gold Gloves and 3 Silver Sluggers. Post-Boston, he was a World Series MVP. In Boston, he was just the first in a long line of failed Red Sox shortstops during the time that position was their version of the Defense of Dark Arts professor job.

Valentine won over 1,000 game in 15 seasons. Finished in the top five of the Manager of the Year voting. And took the 200 Mets to the World Series. And after 10 years away from the dugout, might have been the worst choice among all the human beings on Earth to manage the 2012 post-Chicken & Beer Red Sox. But after an exhaustive, worldwide search, he got the job. And yet the team wasn’t horrible at first. They were exactly .500 exactly 50% of the way through the season and +43 in Run Differential. Which must’ve been the exact moment his players got sick of his bullshit because the rest of the way they went 26-50, with a Run Differential of -115. And a year after winning 69 games under Bobby V they won the World Series for Farrell. So there’s that.

In the words of DeNiro in “A Bronx Tale,” “The saddest thing in life is wasted talent.” In my time on this spinning blue marble, I’ve seen plenty of athletes waste theirs. Most of them through substance abuse (nods in the direction of Dwight Gooden and John Daly). Albert Haynesworth’s only addiction is to being an asshole. For him, it was intentional. He simply refused to show any effort. Even false hustle would’ve been an upgrade, but he couldn’t be bothered. Even in 2011 when he was traded to a team headed to the Super Bowl so he could redeem his hugely disappointing career and show a little bit of personal pride. His Patriots career stat line:

Only the fact that they gave up practically nothing to get him and signed him to one of their no-risk “Show Me” deals puts him so far down this list. He showed them alright. That he was useless.

Honorable Mentions Who At Times Did Enough to Keep Them Off This List: JD Drew, Adrian Gonzalez

And because a comic buddy of mine suggested it, Wanda Sykes, at Denis Leary’s “Comics Come Home” fundraiser at the Garden. Apparently Bill Burr had to come on after she bombed and save the show. This was one crowd that was in no mood to be lectured to at a benefit comedy show: