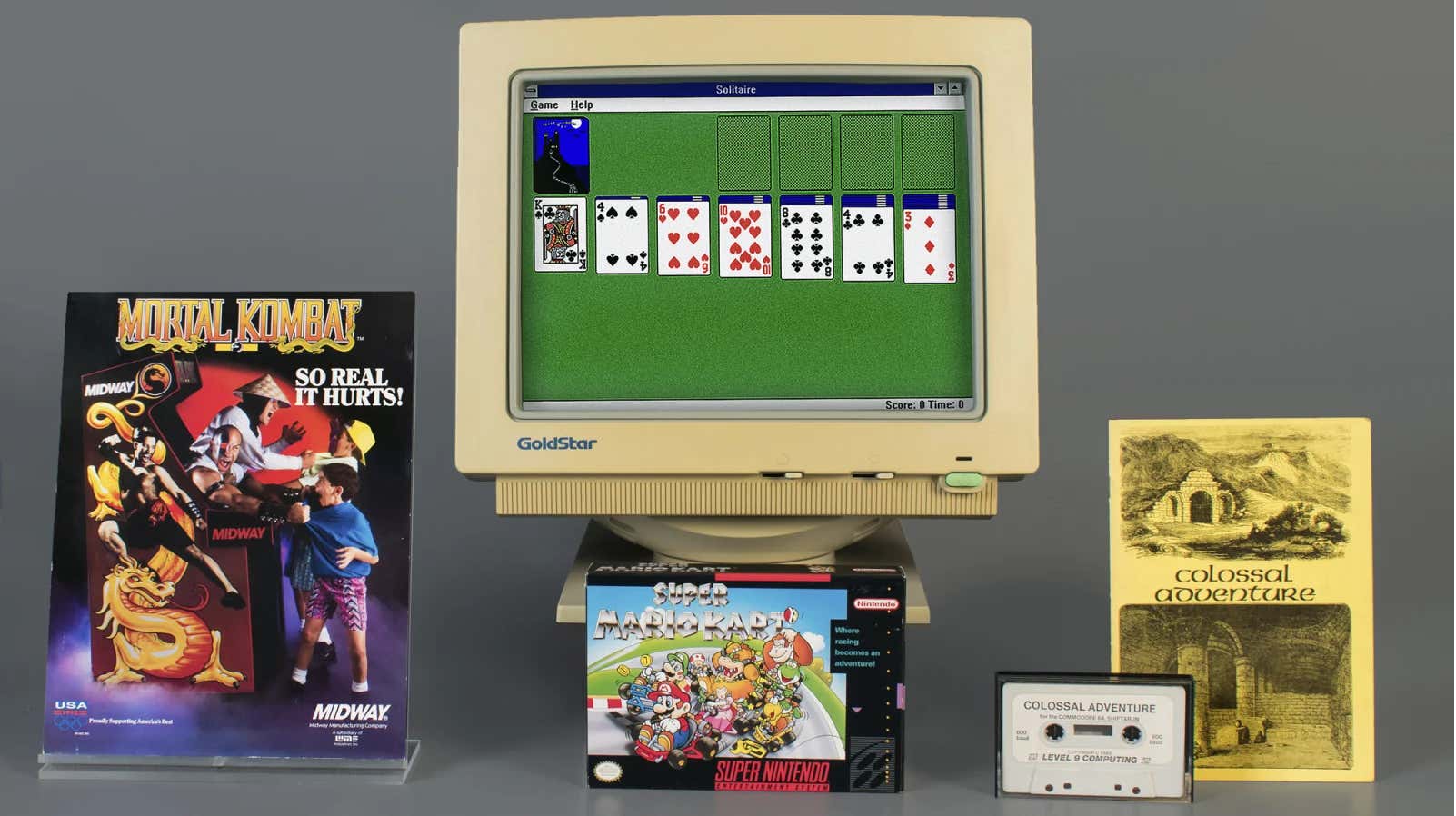 Geek Wire – “Solitaire” joins “Colossal Cave Adventure,” “Mortal Kombat,” and “Super Mario Kart” in the 2019 class of inductees into the Hall of Fame. The Strong said in its own news release that the four games “span multiple decades, countries of origin, and gaming platforms, but all have significantly affected the video game industry, popular culture, and society in general.” They emerged from a field of 12 finalists which included “Candy Crush Saga,” “Centipede,” “Dance Dance Revolution,” “Half-Life,” “Myst,” “NBA 2K,” “Sid Meier’s Civilization,” and “Super Smash Bros. Melee.”

BOMB squad right there. Like in 2015 when Randy Johnson, Pedro, Smoltz and Biggio made it to The Hall. We’re all just gonna go ahead and ignore Colossal Cave Adventure because unless youre Rear Admiral or some shit, nobody is gonna know what the fuck that is. Quickly we’ll just get this out of the way – “a 1976 text-based title called Colossal Cave Adventure which paved the way for today’s sprawling, fantasy-based games.” So pay homage to CCA if you’re a Final Fantasy guy or down with the World of Warcraft. Now lets get to the main three: 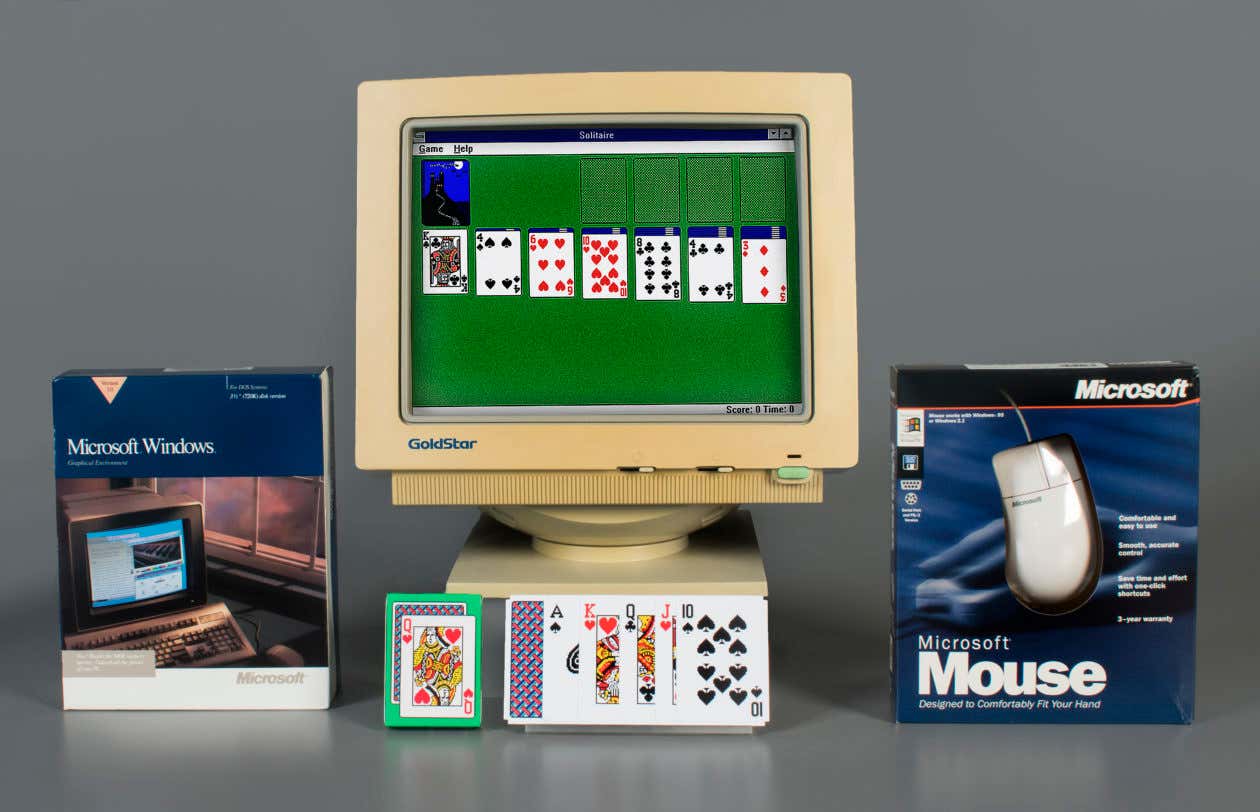 The young bucks will never understand. If you’re under the age of like, I dunno, 25, you’ll never grasp the importance of Solitaire. Nowadays, the gaming world is so massive and so prolific. With a million consoles, mobile devices, and PCs, all equipped with a million different games to play, directly available for download, the world of gaming is literally at your fingertips. But there was a time when things werent so easy. There was a time when the pickins were slim and the desperation was REAL. When you were sitting at your desk at work or rotting away in a library studying and you were willing to play anything to kill time. And Solitaire was Old Faithful in those jams. It was automatically available on every computer so you knew you could count on it. It didnt matter that when you were like 12 years old you didnt even know how to play. You just spent time clicking and dragging and then restarting when you gave up. It didnt matter that even when you did know the rules it was fucking impossible. The point was that you could always rely on Solitaire to distract you from the Excel Spreadsheet or your homework or the 15 page page that was due in the morning. And on the rare occasion that you actually did complete a whole deck of Solitaire (and I’m talking about drawing one card at a time, not that bitch ass 3 card draw bullshit for the cheaters) when you saw that deck of cards go Slinky all over the screen, it was one of the most satisfying accomplishments in your life:

Also if you didnt choose the haunted castle as your deck theme, you have no taste 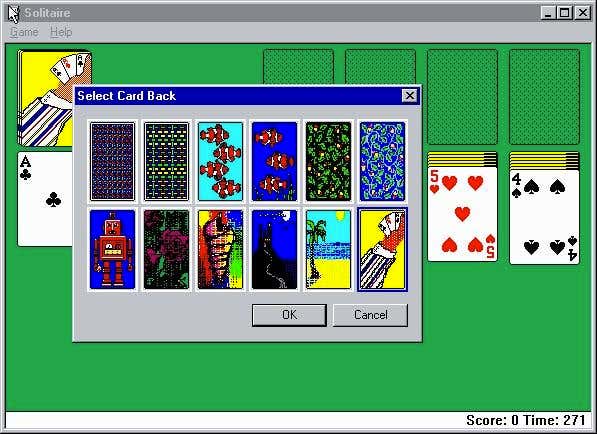 PS – If you’re gonna induct Solitaire, you almost have to induct Minesweeper. Those two go hand in hand. Like Peanut Butter and Jelly.

Plain and simple it paved the way for violence in video games. Blood and gore and violence…and it was awesome. Full disclosure, I’m a Street Fighter II guy. I feel like in this world you are either a Mortal Kombat guy or a Street Fighter guy. Thats not to say you cant like both, but gun to your head you gotta pick one. I’m taking Hadouken and Sonic Boom over Raiden’s lightning or Liu Kang’s fireball.

But all that said, Mortal Kombat absolutely changed the game with the amount of characters, specialty moves, violence and game secrets that could be unlocked. First and foremost, Scorpion, Sub Zero, Reptile, and Smoke were the most badass characters out of all the one on one fighting games. As I said I’m overall a Street Fighter guy, but if you had to pick one single character from either game, Scorpion was the pick. “GET OVER HERE!”  is one of the most memorable actions, in any video game, ever. Secondly, The Pit was one of the greatest and most iconic video game settings I can recall. Anybody on any skill level could upper cut someone off that platform and into a pit of spikes and experience the rush of murdering the fuck out of someone.

As easy as it was to just do “Get Over Here!” ten times in a row and upper cut your opponent 100 feet to their death, the true lasting image of Mortal Kombat, of course, will be the Fatalities. The most creative deaths in any video game, new or old, belongs to Mortal Kombat. Ripping hearts out, ripping spines out, setting your opponent’s dazed body on fire, turning into a dragon and eating them, crawling in their ear and exploding from the inside out…even Sonya’s Kiss of Death…they were all exhilarating. Difficult enough where you had to earn it and get good at the button combinations, easy enough that you got to see all of them – there was nothing quite like the rush of the sky dimming knowing that you had pulled off the right combo and you were gonna get to see some CARNAGE. And the creativity of Konami to then expand that into “Friendships” instead of Fatalities to get a laugh…brilliant. To include Easter Eggs like “Toasty” and unlocking new characters and new costumes…brilliant. There was just so many layers to this game that even if you had played every day, all year long (which we all did after school) you could still be finding new twists and turns to enjoy.

Not to mention it inspired one of the best-worst movies ever, and flat out one of the most ELECTRIC techno songs of all time. “TEST. YOUR MIGHT. MORTALLLLL KOMBATTTTT!!!” Da Da Da DA…DA DA DA DA!”

I’ll be honest, as I blogged this I made a compelling argument to myself to make MK the Gold Medal. But I’m gonna stick to my guns here and go with my gut. My first instinct was the Mario Kart was the GOAT of this bunch and I’m sticking to it. I’m giving it to the entire Mario Kart Franchise, because to be honest while I understand Super Mario Kart on SNES was the beginning of it all, Mario Kart 64 is obviously the pinnacle of Kart. The two headed beast that was Goldeneye and Mario Kart turned video games into the anti-social, hide-in-the-basement-by-yourself activity into the social exercise of the night. The 4 screen races…battle mode with the balloons…both versions of this game were stellar. Knowing every nook and cranny, every short cut, every corner to cut was something to pride yourself on. Mastering the Koopa Troopa Beach cave/tunnel jump was a necessity. Jumping off of Rainbow Road at the start and landing on the track below cutting off like 4 minutes on each lap was better than masturbating. And I had JUST learned how to masturbate when Mario Kart 64 dropped so thats saying a lot. When the Tokyo Drift Smoke goes from Grey, to Yellow, to orange/red, oh my lawd is that satisfying. The only thing more satisfying in race mode is going worst to first on a lightning bolt and stomping on all those little bitch ass shrunken racers. And the only thing more satisfying than THOSE things, is picking someone off with a green shell. Thats where you separate the men from the boys in ‘Kart. Anybody can fire off some heat seeking red shells. But to snipe someone with a green shell using your own skill and your own timing, well that was something special. Plain and simple its the best, most fun racing game of all time. Its a racing/battle hybrid that will stand the test of time now until your great grandkids are playing it. You could even make the argument that its the most entertaining game, of any genres, period. It was that well done.

I was a little too old/checked out of the video game world to appreciate Super Smash Bros but I know theres a TON of you that are going to be appalled by that game not getting the nod. It will probably make it in 2020 if I had to guess. And along with that, Sid Meier’s Civilization BETTER fucking make it. Civ has been on the ballot since 2016 and I’m starting to get nervous its not getting in. I’ll just repeat what I’ve said in the past to make sure I convey the importance of Sid Meier and Civilization:

Let me just say this about Civilization (particularly Civ II) – Civilization was not a game. It was a way of life. It was an experience. There was a period of time where all I thought about was my Civilization. When my city finished a Wonder of the World or my scientists came up with a new technology, I was fucking ecstatic. The anxiety of watching your phalanx try to hold off an attack from the oppositions Chariots…those little numbers or power bar thing in the top corner disappearing after taking every hit, holding down the city. The feeling when you finally discovered gunpowder and eventually kicked fucking ass with modern weapons. Making sure you built a goddam Temple for your citizens so they wouldnt revolt. Sid Meier was probably more important to me than any other person on earth. I knew this would be a snub for its first couple ballots. Its not surprising. They are DEAD ASS WRONG, but I knew Civ did not have the popularity behind it for a first ballot entry, but now we’re getting to the point where it really, seriously fucking deserves the nod. Civilization should be entered into the Life Hall of Fame. Its more than a Game. Its a way of life.

And NBA 2K is inevitable as well. Aside from Madden, its gotta be the most dominant sports game series of all time.