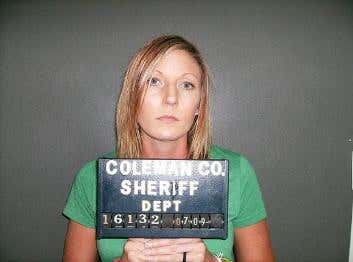 Reader email – I know this is from a few years back, but I’d really appreciate it if you did an SST on this former teacher and now ex-wife of my high school’s baseball team. For some reason my town has a bunch of teachers who love banging kids. There’s been like 3 scandals in 5 years. … And they supposedly had sex when she got out of jail. The baseball coach still works there.

Texas - A former Denison ISD teacher was arrested after police say she admitted to having an improper relationship with one of her students.

Some of those encounters reportedly happened in the classroom. …

34-year-old Julie Bollinger, a former Denison High School teacher, was arrested for having an improper relationship with a student. …

Bollinger didn’t admit to having a sexual relationship with the student until after rumors surfaced in June that there was a video of the two having sex. It states that the day she resigned, she picked up the teen from church and drove him to a local hotel to have sex. …

It also states that authorities found several letters between Bollinger and the student, including hall passes that Bollinger wrote to get the student out of class.

And – She allegedly picked him up from Parkside Baptist Church and took him to the Comfort Inn off Highway 75, then he asked if he could film the liaison on the iPhone she’d bought him so they could communicate. She said yes.

Police say the hotel receipt showed, “No one is to know she is here, no one, not even if they ask for her room!” …

Mr. and Mrs. Bollinger allegedly came in to the police department, where after previous denials, she admitted she’d had sex with the student, eventually saying it happened once in the hotel, twice in the classroom, and twice in a car.

Yes, I’ll admit that while this is, in fact, a “Sex Scandal” about a “Teacher” that I’ll be “Grading,” it’s not the “Newest.” Not by a damned sight. But as with anything, if it’s new to me, that counts. This one obviously took place during my time at WEEI, where you could call the target demo a city of hate-spewing, drunken, slack-jawed, knuckle-dragging, racist morons and have contempt for every athlete, coach and team they care about. But satiric blogs ridiculing female career educators throwing their comfortable lives away for some unsatisfying sex with their students were frowned upon. So because I missed this one, I’m willing to open a cold case on it, like Fox Mulder digging through the boxes in his office for an old, unsolved X-File.

And my first take is you’ve got to feel for Coach Bollinger here. I was able to confirm that what the emailer said is true: He’s still working at the school. So he not only had to pass the kid his wife was sending love notes and hall passes to and making cell phone porns with, he had to watch the kid graduate. And had to hold down his job while his wife was wearing an orange jumpsuit and eating off a metal tray with a spork, just to keep paying the bills. I can’t for the life of me imagine how hard it must be to try to get your outfielders to hit the cutoff man and your infielders to keep their glove on the ground while wondering the whole time if they’ve seen the video. But I guess once you’ve survived listening to your wife tell the cops she banged the kid in every place but the batter’s box, everything else comes relatively easy.

The Grades:
Looks: This is all I got. And believe me, I invested a lot of time looking. I feel like any other picture of her would be really solid. But you work with what you’ve got. Which is she’s sort of a young Allison Janney.
Grade: B-

Intangibles: In language her husband can understand, this 17-year-old batted 1.000 with Julie Bollinger in scoring position.
Grade: A

Overall: B+. Thanks to all our readers, this emailer in particular.