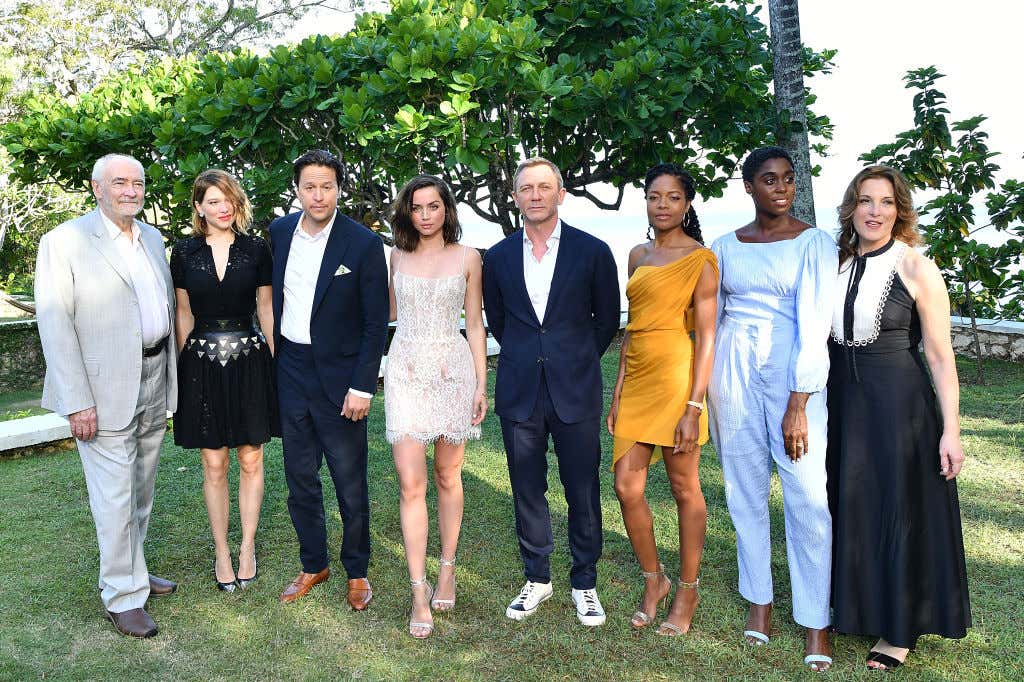 NY POST – The 25th James Bond film just launched in Jamaica and there’s already trouble in paradise over the title and plot – however Page Six has learned that famed Bond villains Grace Jones and Christoph Waltz will return in cameo roles.

While Ralph Fiennes, Naomie Harris (Moneypenny) Ben Whishaw (Q) and Léa Seydoux (Madeleine Swann from Spectre) were formally announced on Thursday as returning for Daniel Craig’s swan song as 007, with Oscar winner Rami Malek newly signed as a villain – the movie has no title and no finalized script.

And rather like grumpy Craig himself (who famously said he’d rather “slash his wrists” than return as 007 after 2015’s insipid “Spectre”), Bond 25 opens with a retired 007 who appears to be just as unwilling to go back into her Majesty’s Secret Service, living in “his spiritual home” of Jamaica with Swann.

The source added of curmudgeonly Craig’s return, “Everyone on the production side detests working with Daniel, he’s so difficult and makes things impossible. But [Bond producer] Barbara Broccoli thinks he walks on water, and only her opinion matters.”

There’s a lesson to be learned here for all the directors and producers and writers in Hollywood:

When a guy says he’d rather “slit his wrists” than be in one of your movies again, either listen to him, or be prepared for a shitstorm when he hits the set to be in the next movie. 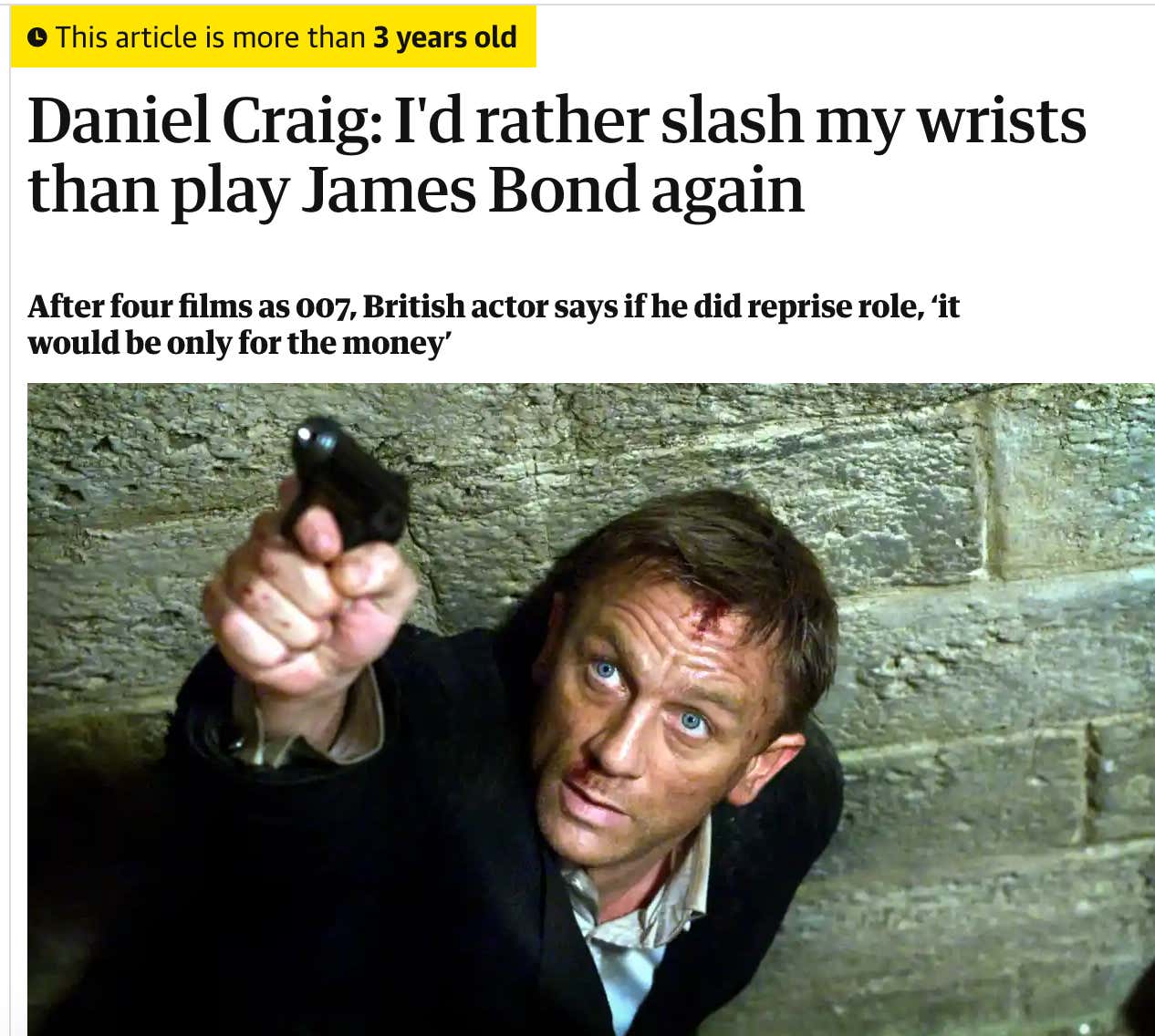 “Bond 25″ (which obviously, does not even have a title yet) ALSO does not have a finished script – it starts with Bond “retired and in wedded bliss,” but beyond that, it’s still a work in progress (would be kind of funny if he just never left the “wedded bliss” part and the whole movie was about him trying to deal with marital issues like who is picking up the kids from day care and whether the in-laws stay in the house or a hotel.)

A source close to Bond 25 said, “They don’t have a script, there’s no title, it is nearly five years since the last Bond. It starts with a retired Bond living in wedded bliss, but the rest of the script is still being worked over. They rolled out the cast this week at Ian Fleming’s villa in Jamaica because if they wait much longer Daniel Craig, who is 51, will be too old, and then he really won’t do the film.”

(Unfortunately, it looks like they’re working on more of a traditional Bond plot:)

Brief details of the plot find Bond called back into action when his CIA cohort Felix Leiter, played by Jeffrey Wright, turns up asking for help to rescue a kidnapped scientist. It has been rumored that the plot would also touch heavily on the dangers of powerful tech or social media platforms falling into nefarious hands.

They already had to scrap their first working title “Shatterhand” after it leaked online and got SKEWERED by Bond fans because it was already a title of a 90’s video game.

Most of the chaos is reportedly being caused by Craig himself, who is apparently somewhat of a diva on set: he insists on his own chef, doctor and trainer, who only work for him and no one else, needs approval on all Bond girls and villains, and erupts at anyone who disturbs his “creative process.”

The SUN – JAMES Bond star Daniel Craig is insisting on having his own physio, chef and personal trainer while filming in Jamaica.

His demands come as insiders tell of production rows and problems on set.

A film source said: “Daniel is a perfectionist and his chef will only cook for him.

“That, coupled with having his own trainer with him, means he will be fighting fit for what is a slog of filming schedule.”

The therapist is thought to be a precaution after Craig injured his knee filming Spectre in 2015.

Demanding Craig has proved hard to please in the past.

Danny Boyle reportedly quit as director over a spat with him over casting for the film’s lead villain.

Is it just me or all of those things pretty par for the course?  Everyone is trying to paint Craig as this monster – ummm, when you pay a guy $66 million to do your massive franchise movie, it kind of makes him the de facto center of attention on your set. When you give a guy “complete creative control” to get him back to the movie…don’t whine when he takes control creatively, completely. And the whole point of a PERSONAL chef and PERSONAL trainer is that they are personal, meaning, just for you, personally.

I don’t know if anyone working on Bond 25 has ever worked with a celebrity superstar actor before, but it doesn’t seem like it.  Get it together, Key Grip and stagehands.  It’s Daniel Craig’s show and you’re just there to make sure we get to see it before we die.

Seriously, if we don’t see the new Bond girl on the big screen soon, I’m gonna lose my shit.