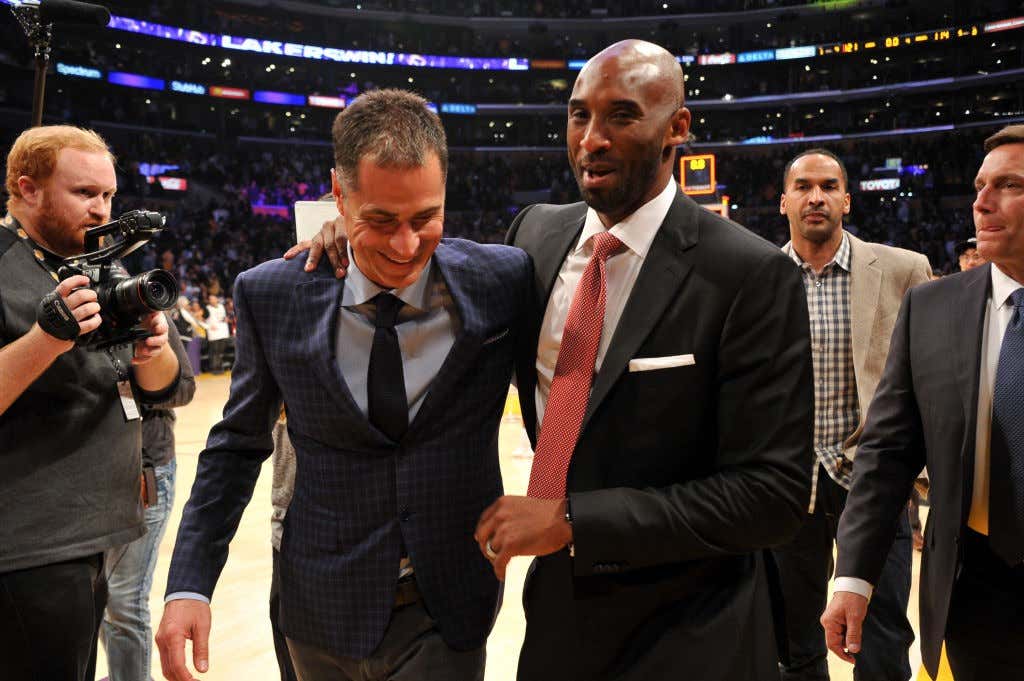 If the Lakers still plan on replacing Johnson, could Pelinka’s former client and longtime friend Kobe Bryant join him in the front office? Bryant said there’s no chance that happens during an appearance on “The Ellen Show” on Friday:

Ellen: So, can I ask you, were you surprised that Magic Johnson stepped down, was that a surprise to everybody?

Ellen: And will you be stepping in?

Kobe: No. No. Nope. Nope. I’m staying right on the sideline and coaching my daughters.

Man, tough times for the Lakers right now. Their season was a disaster and things have not been all that better this offseason. First Lakers legend Magic Johnson got the fuck out as quick as he could, then there were rumors that the Lakers were trying to get Pat Riley to come over from Miami to save them and he politely told them thanks but no thanks, and now we have another legend in Kobe Bryant openly stating he wants nothing to do with that mess. It begs to question, why can’t they convince any of these big time Lakers legends to come aboard? Is it LeBron? Is it Rob Pelinka not knowing what the fuck he’s doing? Is it because everyone knows the Lakers are not going to land a big fish in free agency? You would think people would be lining up to run a team that has such a talent like LeBron on it and a shit ton of money to spend but nobody wants to touch this franchise with a 10 foot poll.

With Kobe though, I was actually surprised to hear him turn this down. You know Jeanie Buss would give him the job if he wanted it, and honestly I can’t believe he’s passing up a prime opportunity to cuck the shit out of LeBron. Imagine he takes the job and actually saves them, that’s the ultimate trump card over James in terms of their Lakers tenure. The Kobe/LeBron Laker debate is already a hot topic among fans, where long time LeBron haters and Kobe stans have had to flip flop once James put on the purple and gold. Now what would they do if it was Kobe and not LeBron that saved this pathetic franchise?

I just can’t believe Kobe is so willing to pass up this opportunity. I was one of the people out on the internet that prayed he would come back and sit on the bench when the Lakers got off to a slow start just to mess with LeBron. The internet NEEDS Kobe to one day be LeBron’s boss. If you thought things with Magic were dysfunctional just imagine that reality. So now that we can cross off Magic, Riley, and Kobe, who out there is left from their past that could take this job? They’ve already made Kurt Rambis a key member of their front office which is hilarious for a wide variety of reasons, but I say just get nuts and have someone like Ron Artest be in charge. He hit that big shot in 2010 to win them that title, so while Lakers Legend may be a bit of a stretch, nobody else wants this damn job so why the hell not.