The NFL Draft isn’t for everybody. I get that. I can totally grasp why you’d question the sanity of a man who’d rather spend 3 1/2 hours watching an emotionless, middle aged, red-headed demon walk up to a podium and announce the names of 22-year-olds wearing loud suits and baseball hats instead of an overtime playoff hockey game. Even back when the draft started Saturdays at noon and there was nothing else on TV, I understood people who didn’t get it. One time I went into my old job and started talking about getting together with my brother for the draft and my buddy said, “Wait. You’re not going to tell me you actually watched that crap?” And semi-embarrassed I answered, “Just the … first … eight … hours or so.” True.

But this is why we watch. Moments like these. The most successful, accomplished man in the sports world placing a call to a college kid and changing his life with the speed of a cell signal. A 21-year-old born in Toronto, raised in St. Vincent and the Grenadines, goes to school in Arizona and finds out his life’s goals are coming true in New England. It’s almost mythological. The sort of Hero’s Journey Joseph Campbell wrote about. Where the Call to Adventure comes from an old mentor that Campbell said represents “the benign, protecting power of destiny.” And in N’Keal Harry’s case, as with so many other great legends, that mentor is a wizard in grey hooded robes.

I’ll admit I didn’t see the Patriots going with a wide receiver in the 1st round, only because they never had before. But at this point, it should be pretty obvious that the only pattern when it comes to their picks is that there is no pattern. Harry is the 18th Round 1 selection they’ve made since 2000. And the breakdown goes like this:

In fact, the only positions they haven’t addressed in the 1st are center and quarterback. And they could go for either next year. So why this receiver this year? First of all, this: 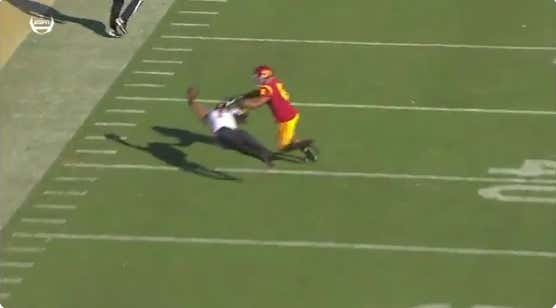 Holy schniekies. That is at least as good as any catch Odell Beckham has ever made, and he was being interfered with. Second, it would appear that the Patriots are making size a priority at wideout, with Josh Gordon, Demaryius Thomas and now Harry all 6-2, 220 or bigger. So that is how they see the position evolving. It’s an arms race on the outside, with corners getting bigger from year to year, and they’re trying to stay ahead of the trend.

Henry: I would describe my game as very passionate. I play with a lot of passion. Whenever that ball is in the air, I’ll sacrifice anything to go get it and I’ll do whatever it takes to help the team win. Anything Coach wants me to do, whether it’s on special teams, offense, anything, I’ll do it just to do my part and to be one piece of the puzzle in helping us win.

Q: Do you hope to expand your route tree when you get to New England?

NH: That’s not really up to me too much – it’s all on what the coaches want from me. I’m going to come in with the mindset of being very coachable. I’ve always been a very coachable player, just picking up on things very quickly. Whatever they need me to do or want me to do, I’ll get on it right away. …

Q: What do you remember about meeting Bill Belichick?

NH: What do I remember? He was a very great man. I feel like a lot of people just think of him as just an uptight person, but he was very relatable. We were in there smiling, cracking jokes, so I got a very good vibe from him and I’m looking forward to talking to him tomorrow, as well.

So far so good. Anyone who remembers their previous highest drafted wideout, Chad Jackson (36th in 2006) and the 10 or so seconds it took for him to establish he was a useless meathead who’d never make it in the NFL, the way Harry comes across in interviews is bourbon for the soul. I don’t think they’re done addressing the position. And I’ll be shocked if they don’t go tight end with one of their five picks tonight. But for now, now that the initial shock of them taking a receiver has warn off, life is good.